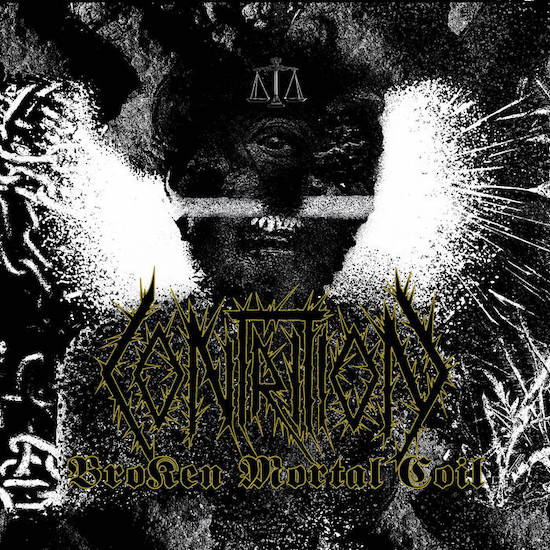 The resumes of the people in Chicago-based Contrition open eyes. Those people are Jerome Marshall (Cobalt, Yakuza) on vocals, Garry Naples (Novembers Doom, Without Waves) on drums, Jeff Wilson (Chrome Waves, Deeper Graves, ex-Wolvhammer) on guitars and synth, and Jon Woodring (Bones, ex-Usurper) on bass. As an educated guess, they’ve got all sorts of different music swirling through their heads from day to day, even making room for the silence of sleep and maybe a few other silences. So, where did they go under the name Contrition on their debut album, Broken Mortal Coil?

The astute among you will already have an idea, based on the singles that have emerged in the run-up to the October 29 release by Wilson’s Disorder Recordings. Some of you may even know that a couple of these people already collaborated in a band called Doomsday, which released one self-titled EP in 2012 (worth tracking down if you don’t have it), and which itself provides some distant clues.

But I’m going to pretend you don’t know where these four (and their noteworthy guests) coalesced on Broken Mortal Coil, that your minds are as clean as an erased chalkboard, still dusty but ready to be filled, or wrecked. 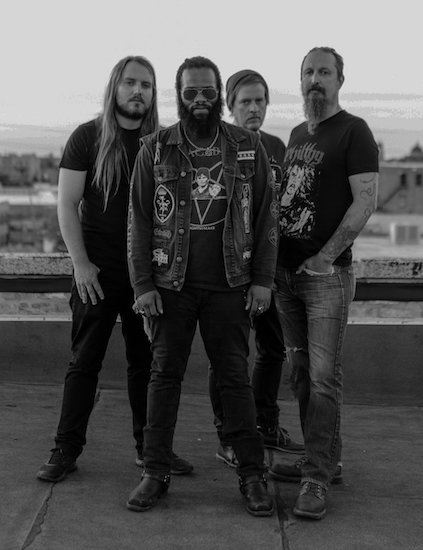 Jeff Wilson has said that this is an album he’s had going around in his head for quite some time now. “Fortunately, the pandemic was the perfect shit storm to award us the opportunity. The sheer amount of bourbon consumed during the tracking of this album would’ve killed most bands in 2021, but it only accentuated the gnarly vibe in this case. Hopefully, there’s an old school attitude that shines through here as well, because I think that’s where all of our heads were”.

The album apparently didn’t exhaust the inspirations, and hell knows that bourbon is inexhaustible, and thus Wilson also says “We’ll be back for more in 2022.” Before you applaud that announcement, listen to the album — and then you’ll want to applaud.

On the one hand, this is Chicago extreme metal performed by people who’ve been around the block a long time, so you could guess that the hope has been beaten out of it like bloody steak tenderized with steel mallets. To a significant degree, you’d be right. The music does inflict a pulverizing beating, and it’s often as bleak as a sucking chest wound. But it’s undeniably electrifying.

Fueled by drumming that threatens ruptured spleens and craggy bass lines that compulsively thump the nerves, the rhythms of the music alternately stomp, rumble, gallop, fire like automatic weaponry, and detonate like megaton bombs — all of it executed with relentlessly ferocious intent. The riffing is tuned to a gut-gouging degree of distortion and delivers earth-quaking heaviness, as well as corrupted melodies that channel madness and misery. The guitar leads seethe like heated poison, swarm like piranhas, and scream and swirl like demented specters, giving the music a frightening supernatural aura.

The channel-shifting vocals stand out almost more than everything else — because they’re so terrifically terrifying. They have a completely savage and unhinged quality as they range through bestial, belly-deep roars to larynx-lacerating shrieks.

To break up the barbarity, and for extra mind-warping impact, the band also throw in the nightmarish ambient collage of “Desolation Star” about halfway through the album, and follow that with the blood-freezing, skull-snapping experience of “Added Subtraction”, which creates an atmosphere of morbid grandeur but then becomes a violent seizure, and the wild romp of “Without Guilt”, which is both as brutalizing and as berserk as anything else on the record.

These eight songs run you through their meat-grinding and mind-ruining gauntlet in just shy of half an hour, closing with a twisted but fantastic cover of Nirvana’s “Tourette’s“. What Contrition do to the original fits perfectly with all the mauling and the madness that precedes it.

And with that, we invite you to dive head-long into our premiere stream of Broken Mortal Coil:

The album was engineered, mixed, and mastered by Jeff Wilson at Disorder Recordings, and completed with frightening cover art by Ethan Lee McCarthy (Primitive Man) and design by Wilson.

Broken Mortal Coil will be released on 12” vinyl, digipak CD, and all digital platforms, and there’s apparel to be had as well.

No Responses to “AN NCS ALBUM PREMIERE (AND A REVIEW): CONTRITION — “BROKEN MORTAL COIL””