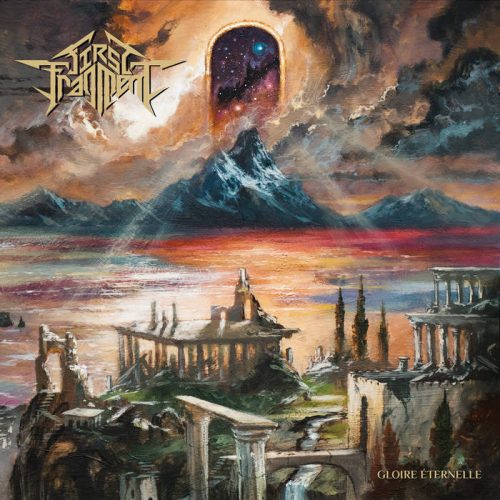 Let’s face it, 2021 has been a ridiculous year for the Tech Death scene.

Of course, last year’s lockdown probably played a big part in that, forcing bands to sit at home and practice until their fingers bled, but we’ve also seen many of these artists demonstrating a major improvement not just in their shredding abilities but in their songwriting skills too.

Sure, the sheer glut of bands showing off their technical talents means that, inevitably, some them are a little interchangeable (especially vocally, but that’s a discussion for another day), but I’ve really been struck by the variety of different approaches – from a laser-like focus on supersonic speed to lethal injections of stupefying slam or flickering flirtations with angular dissonance – adopted by many of the genre’s leading lights as a way of differentiating them from their peers.

And while First Fragment have always been distinguished by their almost symphonic virtuosity, Gloire Éternelle makes it more clear than ever that the band’s music is designed, if not solely for musicians, then at the very least for those with a real appreciation of musicianship, first and foremost. 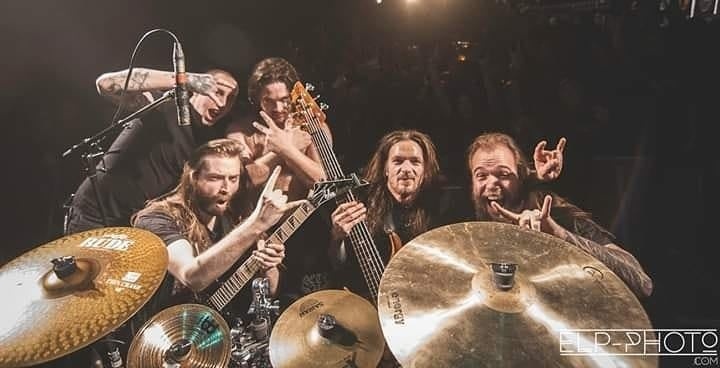 That’s not to say it’s completely inaccessible to the average listener by any means, as there are more than enough bold melodic hooks… sorry, majestic musical motifs… woven into the fabric of the album to lure in even the most tone-deaf of musical luddites (i.e. me), whether that’s the playful, bass-driven bounce of the opening title-track, the high-velocity, Gorod-esque grooves of “Pantheum”, or the more moodily melodic stylings of “Soif Brûlante”, but it’s not exactly hard to see that the primary purpose of this record is to give the whole band (well, almost the whole band) a chance to really show off what they can do.

Thankfully the members of First Fragment are so good at what they do that it’s honestly a joy simply to listen to them cut loose like this, and I don’t think anyone is going to find themselves in any doubt about the attention-grabbing abilities of guitarists Phil Tougas and Nick Miller, or the potent percussive prowess of drummer Nicholas Wells, after even one listen to Gloire Éternelle.

It’s bassist Dominic Lapointe, however, who provides the most impressive, borderline outlandish, showing, his fleet-fingered fretwork not only effortlessly keeping pace with the extravagant antics of Tougas and Miller but also, at key moments – such as the dizzying intro to “Solus” or the frenetic finale of “La Veuve et le Martyr” – seamlessly stealing the spotlight and taking centre stage.

Still, pure talent (as impressive as it might be) can only take you so far, it has to be forged and focussed correctly in order to really make an impact, and it’s the longer, more intricately-arranged numbers – tracks like mid-album highlight “De Chair et de Haine” and the aforementioned title-track – which really shine in this respect, not only because they allow the band an opportunity to fully indulge their more outrageously operatic ambitions (and indulge they most certainly do) but because, perhaps paradoxically, this is also where you can feel them relax a little bit and take greater advantage of all the extra space and headroom.

And nowhere is this more obvious than during the epic penultimate odyssey of “In’el”, which is practically worth the price of admission on its own, and the sort of song – actually it’s more of a symphony – which honestly makes you want to stand up and applaud at the very end, if only for the sheer audacity which it displays across its nearly nineteen minute run-time.

Is there anything to really criticise – well, maybe critique would be a better word – about Gloire Éternelle?

Well, yes, but only really in the sense that this more niche, neo-classical style of Tech-Death invariably has a few inbuilt limitations.

It is, for example, way too long – I’m sure a few committed tech-ophiles will have stayed glued to every single second, but I definitely found myself zoning out every now and again… although, to the band’s credit, they always managed to pull me back in eventually – and the vocals don’t really add much to the whole equation except a general reminder that there is at least one human element to this seemingly inhuman display of musical mayhem (although the occasional burst of bright, vibrant gang vocals is, I’ll admit, a nice touch).

But, ultimately, this is the sort of album which, while undeniably preaching to the converted a little (or a lot), also offers more than enough thrills, spills, and jaw-dropping skills, to entice even the most casually curious of listeners to lose themselves in its labyrinthine layers.