On October 31st Signal Rex will release a vinyl-only album-length split by two bands in the raw black metal brotherhood, the Portuguese duo Minnesjord and the Polish duo Teufelsberg. Each band contributes four tracks to the release, both of them revealing their own particular hellish personalities, and collectively creating a harsh and ravaging but nonetheless thrilling experience.

The album is available for order here, as well as through Bandcamp for each band’s side (here and here), and today we’ve got the premiere streams for all 8 songs, preceded (of course) by our own take on what these two groups have created. 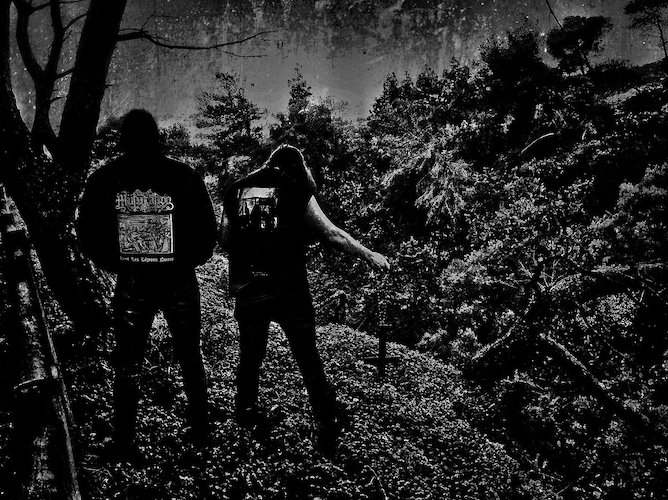 The sub-genre of raw black metal is so called because it’s willfully abrasive, but also because (when done right) it expresses the violence of raw emotion, unfiltered and unchained. The music of Minnesjord lives up to all those expectations, but there’s more in what they do than unpolished and ruinous assaults on the senses. They’ve got a knack for crafting devilish riffs and death-rocking rhythms that are contagious as well as heart-palpitating (and of course fatal to whatever sense of well-being you might have).

The opener, “Armígero“, whistles and clangs, shivers and grinds, throbbing with a vivid drum pulse, livid in its screaming, and increasingly malicious. There’s a bounding wildness to the song, a kind of crazed rocking ecstasy in the riffs and squealing leads, but also a cold fury that radiates from the chords over the drums when they batter.

The degree of distortion in the guitars is radioactive, and the shrieking vocals have a completely unhinged quality, but in “Opróbrio“, where the drums rock and canter again, Minnesjord further prove that their slashing riffs and boiling leads have infectious as well as heart-pumping qualities. There’s feral madness in the music, which becomes an even greater flood of derangement as the drumming begins to pound in a punishing fury.

That intensity carries through into “Mavórcio“, where the drumming almost relentlessly hammers at high speed. The crazed riffing manages to create an amalgam of pain and fear so extreme that it produces a feeling of anguished delirium. When the drums fall silent and then methodically chop the neck, the guitars radiate misery and hopelessness as the vocalist continues rupturing his vocal chords in the throes of some unfathomable possession.

To close their side, Minnesjord switch the mood with “Vitupério“. Driven by a punk-ish galloping rhythm, the riffing again flares into a semblance of exultant violence, dangerous and wild, burning with fever — and of course you get one final dose of those utterly terrifying vocals (mere words really don’t capture how painfully unhinged they are). 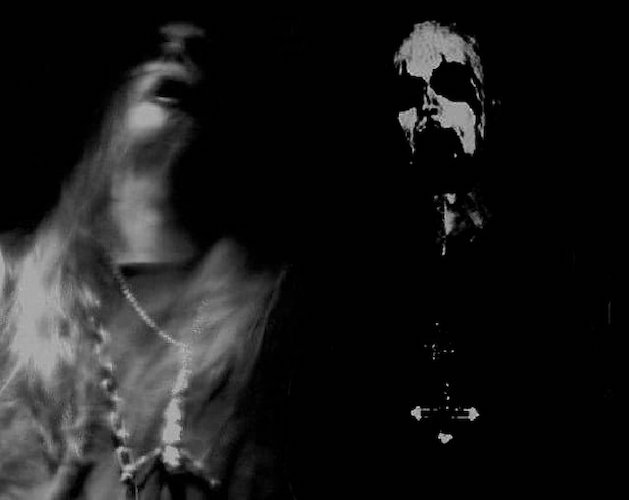 The four tracks of Teufelsberg are no less perilous to the senses than the songs of Minnesjord, but if anything they’re both more militantly violent and more otherworldly.

The initial Intro track begins to attack the listener’s sanity with bursts of clattering percussion against a backdrop of weird writhing, whistling, and screaming tones which collectively create an atmosphere of mayhem and torture. From there, “Moloch Worshipers” discharges a squirming mass of shrill, caustic guitars, full-throttle blast-beats, and bestial snarls. The mood of the music remains berserk, but as the bass rises to prominence and the drumming switches gears, the sound becomes frighteningly supernatural, thanks to eerie slithering and swarming leads — the sound of vipers from beyond earthly planes.

“Cultes des Morts” is less crazed and more magisterial, thanks to a less manic drum operation and riffing that flickers with sulphurous imperiousness and pestilential threat. Intensely sinister throughout, the song does accelerate as the drums begin to batter and scamper, but the timbre of the riffing changes, seeming to channel an agonized downfall as well as a kind of deviant, pulsating joy.

The closing track on Teufelsberg’s side, “Retaliation of the Evil Ones“, attacks in a paroxysm of pure, merciless madness, all bullet-spitting drums, freakishly swarming guitars, malignant howls, and lunatic screams. As before, the band do switch gears, stomping and mauling with cold determination, and they send out streams of shrill, wailing guitar melody that again bring forth supernatural visions in chilling fashion.