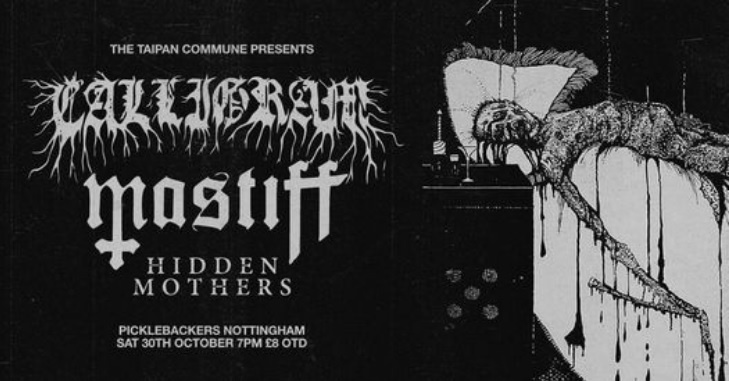 (Andy Synn reports back from a recent show – remember those? – he was lucky enough to attend)

I was going to start out this article with a comment on how it feels like things are finally getting back to “normal”… but, to be honest, that’s not really true.

Of course, this is neither the time nor the place to discuss all the ways in which the world is still in an incredibly weird and uncertain place, so instead I’d just like to say how lucky I feel to have been able to enjoy a gig like this, when so many others can’t, and that I hope you guys get the chance to do so yourselves soon too.

Openers Hidden Mothers are likely to be the least familiar to our regular readers, as I’m not sure we’ve ever actually written about them before (which is probably my fault).

However, this is my chance to rectify that, with a wholehearted recommendation of their highly emotive, extremely immersive blend of scalding screams, crooning cleans, blast-driven riffs and reverb-drenched melodies.

Sure, their particular brand of “Post-Black Metal” is more “Post-” than it is “Black Metal” a lot of the time (from the passages of aching melodic ambience to the Thrice-like singing of guitarist Luke Scrivens), and their “Black Metal” side is more Deafheaven than, say, Dark Funeral, but none of that is necessarily a bad thing – especially if you’ve got an open mind about this sort of stuff – and there’s an earnest energy and heartfelt honesty to their music, and their performance this evening, that should strike a chord with many of you.

Weirdly, one of the most impressive things about the band’s set – which was damn good from start to finish, I might add – was the smooth and professional way they dealt with some rather serious technical issues, namely the catastrophic failure of their drummer’s kick-pedals part-way through a song, extending the track’s moody, atmospheric mid-section in brooding, hypnotic fashion as they switched out that particular piece of equipment entirely, only to then kick back in hard as if nothing had ever gone wrong.

So if you like what you’ve read here then check out the band’s music online, or give the video I shot of “The Longest Journey Yet” a look/listen, ASAP.

Ugly, nasty, and painfully nihilistic their music may be, but live Mastiff are much more of a party band than you might expect – mildly inebriated frontman Jim Hodge in particular – with much of their between-song banter dedicated to exhorting the audience to purge their negativity through the classic therapeutic methods of head-bangin’ and horn-raisin’!

The band’s humongously heavy set drew from both their most recent albums (2019’s Plague and this year’s Leave Me the Ashes of the Earth, whiplashing back and forth between grittier, grindier cuts like the short-sharp-shock of “Fail” and the appropriately-gnarly “Torture” and suffocatingly sludgy numbers like the chunky, churning “Repulse” and penultimate powerhouse “Lung Rust” (easily the highlight of the set for me), with very few breaks in the action (an enforced mid-set delay due to faults with the bass being one of the only exceptions).

I managed to capture a video of the band in full flight during a monstrous rendition of “Midnight Creeper”, which you can see and hear below, so even if you haven’t had a chance to catch them live yet you can still experience a Mastiff mauling vicariously through the power of the internet!

As it happens, the last gig I saw before the pandemic took hold had Calligram on the bill (along with Harrowed and Geist), which makes it seem like only yesterday – yet also a million years ago – when I last experienced their particular brand of Blackened Hardcore brutality.

But let me tell you something… even though they’ve obviously not been playing live much for the last year-and-a-half the Calligram crew clearly haven’t lost a step during their enforced hiatus. In fact they might just be more aggressive, and more abrasive, than ever!

Hell, at one point vocalist Matteo Rizzardo’s mic cut out entirely mid-song, and the singer’s instinctive response was to simply cast it aside and instigate a furious pit (one of several which would suddenly manifest, burn out, and then reignite twice as hard, over the course of the band’s set) that saw a hefty portion of the assembled audience slamming into each other, and the walls, for several madcap minutes.

Of course, it’s always better when all the equipment is working right, and thankfully the situation was quickly rectified, allowing the rest of the set to proceed at full force, and full volume, as the band smashed through track after track of venomous shrieks, buzzing guitars, and blasting drums without mercy or restraint.

In conclusion, let’s just say that this whole night was one hell of a way to return to the live scene… for both the players and the punters.