It’s funny, because in the same “different face, same presentation” manner that I’m thinking of changing my writing alias for this website, so too has Obscura decided to do the same regarding their sonic identity with A Valediction. Obscura is one of my favorite bands of all time, although I didn’t used to feel that way. I was that guy who in the case of Cosmogenesis was was using unimaginative, uneducated language like “boring”, “pretentious”, and “wanky”to describe what was in reality some of the most mature guitar-centric progressive and technical death metal produced aside from Necrophagist.

Anyone who has been around as a metalhead for awhile knows that makes sense, given that half of the lineup of Cosmogenesis consisted of Necrophagist alumni in the person of guitarist Christian Münzner and drumming war-god Hannes Grossmann. Yes, I know Obscura had Retribution before it, but Cosmogenesis is what put this band on the map. There’s just no arguing that.

As I grew older I came to LOVE Obscura. I was enthusiastic for Akróasis, an intensely introspective progressive effort that saw Steffen Kummerer and the lineup he had at the time pushing the songwriting into labyrinthine territory, full of layers of melody and interesting compositional transitions that culminated in what, to me, is still the best Obscura album, as far as it being a straight flaunting of the musical supremacy the band has always represented. It’s Obscura at their most pornographic and obscene.

Then Diluvium came out in 2018 and like… listen guys, that was the AOTY. I know that’s a hot take to some; having definitive opinions about this kind of shit gets music fans the world over riled up, but Diluvium was objectively the best death metal record of 2018, if not the best extreme metal record of that entire year. It was the Obscura sound at its absolute most fine-tuned master-crafted best, and while Akróasis was the porno album, Diluvium is the PhD thesis. It is Obscura’s best bar-none songwriting album, a record flawlessly balanced between the progressive songwriting whims and the physical technical capability of its musicians. It really felt like next-generation death metal that looked to the future. It doesn’t hurt that the album also had a sleek-as-hell mixing job that really brought out everything great about the soul of the Obscura sound.

That isn’t to say Obscura hasn’t been marred by a bit of controversy and turbulence over the years, of course. It is an open secret that Steffen Kummerer, while a genius musician and technically magnificent guitar player, is difficult to work with. I’m sure people remember the drama between him and Akróasis lead guitarist Tom Geldschläger, which I won’t rehearse here. The band has been through multiple lineups in a very Death-esque fashion. In a lot of ways Obscura feels like the modern Death in that regard, and Steffen Kummerer feels like this era’s Chuck Schuldiner. His vocals and riffs are completely his own. You know it was something that he wrote when you hear it and his particular approach to his vocal style is immediately recognizable, to me at least. His musical imprint is all over modern tech-death as we know it in a way that I think would be straight-up ignorant to dance around or deny. 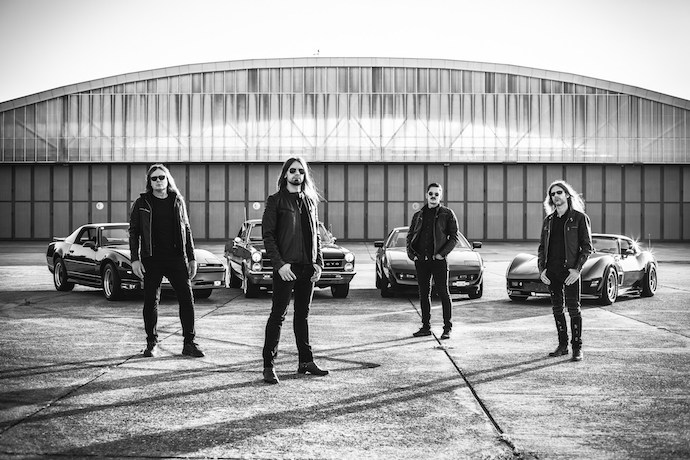 A Valediction, I’ll just get the TL;DR out of the way here, is probably my album of this year as well. I’m just all for Obscura and everything Obscura-adjacent lately, and while I could be confident in simply saying “this album is amazing, you should buy it and listen to it every day for the rest of 2021“, I do feel like I could say a lot more about this album.

First, this is the return of two Obscura alumni from the early days with guitarist Christian Münzner returning as well as Pestilence bassist Jeroen Paul Thesseling. Second, A Valediction represents an extremely interesting three steps back one step sideways change of direction. All progressive pretensions are gone from this record, exchanged for what lazy music consumers might call “a bunch of riff salad”.

I like riff salad, I’m a guitar player, I like riffs, and I think riff salad is good so long as every bit of guitar on the album feels like it was considered and crafted as much as the last, and that definitely happens here. A Valediction is an album that really can be bluntly quantified as fast and furious. This relentless, driving perspective on the Obscura formula provides something that is fresh for the band. There is a lot of thrash this time around and quite a bit of amped up to 11 mach 3 melodic death metal written in the sort of hyper-technical yet baroque layered way that Obscura can.

This newfound commitment to being fast, furious, and foaming at the mouth is only cemented further by Steffen Kummerer’s newfound approach to vocals, which is to say he clearly decided he didn’t value having a voice anymore. He is so harsh, especially on the high-end more black metal vocals, that it sounds like his vocal chords are being shredded into a combination of giblets and blood. I guess the way I’d quantify A Valediction is it’s unhinged power. It’s neoclassical technically brilliant adrenaline with a death-wish speeding 150 MPH down the Autobahn. It’s designer drug high technical melodic death metal with blackened cajun flavor and grime. It’s the best album of 2021.

I mean there’s deviations here and there, of course. Songs like “Devoured Usurper” are there to let you know the band haven’t forgotten how to do their best progressive Morbid Angel bathed in swamp muck and tardive dyskenesia symptoms facsimile, while opener “Forsaken” is a great opener that gives you all the familiar and classic elements of an Obscura record with epic acoustic into distorted multi-harmony guitar grandiosity and drama into a blistering verse riff that guarantees needing spinal surgery afterward from the life-threatening whiplash you’ll obtain. Even those songs, however, are coated in this venomous contamination that is just absolutely belligerently feral in its presentation. This is not the Obscura of the last two albums for sure.

Also “In Adversity” is the best Soilwork song not written by Soilwork and it’s so good at being Soilwork that Soilwork should take notes so they don’t get left in the dust. As a matter of fact, I’m convinced the band blackmailed Speed Strid into providing those guest vocals on fourth single “When Stars Collide’ by threatening to simply push Soilwork out of the free market of ideas. Hard to compete when your sound might be co-opted by one of the bands establishing the standard.

It’s Obscura. It’s A Valediction. It’s the best that metal is going to get this year. Bank on it.

One Response to “OBSCURA: “A VALEDICTION””