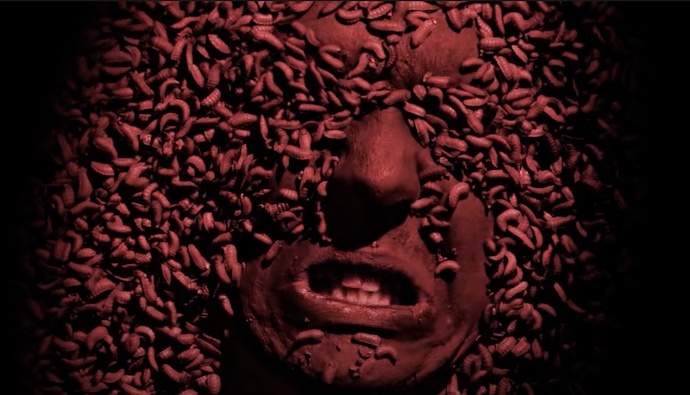 Surely you’ve listened to Revelator by now. If you haven’t, there better be a damned good excuse, like a protracted coma or meningitis-induced deafness or living-under-a-rock ignorance. Possibly you just don’t like absolute musical crushers you can headbang to and/or maelstroms of noise capable of causing your brain to lock up and/or hallucinatory experiences that will disturb your sleep. But we’ll discount those latter explanations, because you’re here at this site, aren’t you? Of course you’re attracted to such things.

We of course are big fans of the genre-colliding Australian band who made Revelator, none more so than our slave DGR who devoted many (MANY) words to it in his review. But we’re not only inveterate fans of the music. We also always relish the videos that The Amenta and friends craft for their songs, because they’re just as wild and unsettling as the music.

And thus we’re thrilled to present one of their jaw-dropping, skull-exploding videos today, for a song that arguably could be considered the centerpiece of Revelator. And in addition to that we also have an extended interview of The Amenta‘s vocalist Cain Cressall, who answers some of the questions that will inevitably occur to you after watching — such as “How the fuck did they do that?”, “Are those maggots and spiders real?”, and “What the hell does this all mean?” 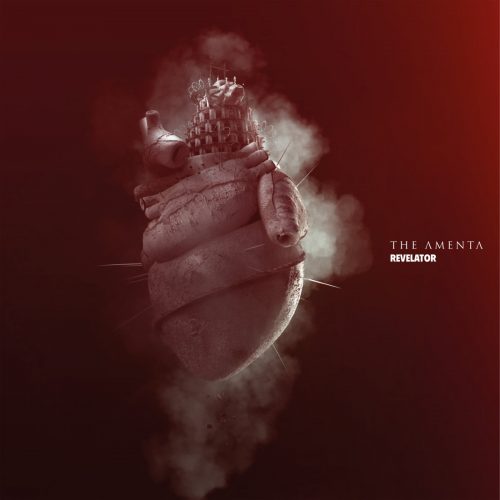 The video really is unnerving — a creepy wonder — and when you read in the interview about how it was made it will become even more wondrously creepy. You’ll also discover through Cain’s commentary that the imagery didn’t derive from the song’s lyrics but instead from inner visions spawned by the disturbing atmosphere of the music, connected initially in a subconscious way to his own life experiences.

The song itself is wide-ranging and frightening, a surreal amalgamation of torment and fury, of soaring grandeur and nerve-wracking tension, of searing intensity and hypnotic mystery, of bone-smashing heaviness and hallucinatory frenzy. Deeply unsettling, it’s also relentlessly captivating. Combined with the video, it becomes even more unforgettable.

Revelator is out now on Debemur Morti Productions.

And now we present that promised interview of Cain Cressall, which we assure you is very much worth your complete attention. Credit for the questions goes to Jonathan at Debemur Morti Productions.

Dear Cain, thank you for giving me your valuable time for another round of questions. Let’s smooth into it: you decided to create yet another video clip, this time for the composition ‘Twined Towers’. Why did you specifically have some pictures for this song in mind? Did you also think of other compositions from Revelator for doing a video? Or was it rather clear that you wanted something for ‘Twined Towers’?

Cain: ‘Twined Towers’ is really the centerpiece of the album, and perhaps the most cinematic. As it’s also the longest track on Revelator, we didn’t know how plausible this would be when we first got the ball rolling with these videos. However, the song itself was received remarkably well, and heralded as an album highlight by most listeners. As time rolled on and we released the first few videos, it seemed more and more necessary that this song should have its moment in the spotlight.

I felt that this one should be treated more as an “art piece”, whereas ‘Sere Money’ and ‘Psoriastasis’ had more of a “story” feel to them, and ‘An Epoch Ellipsis’ was more of a classic “band video”. Naturally, Garth Hurley (CRT Films) was brought back into the fold, who’d worked with us on the previous Revelator videos, and was very happy to take a fresh direction with the song. This gave him more room to experiment with various elements which all tied together wonderfully in the end.

There are a lot of different visual techniques and elements to be found in your new video clip, for example the 3D animation of the heart which also decorates the cover of Revelator, the editing of Cain as a form of lightning demon, the big (animated?) spider, et cetera. Can you elaborate for us the different techniques used for all these shots? What was necessary to make this video clip happen? And how are all the maggots doing which can be seen the clip?

Cain: It started with the 3D animation which was masterfully designed and crafted by Valnoir of the legendary Metastazis design studio, and which was inspired by Tim’s lyrics. Once that footage was sync’d with the intro of the song, all I had to do was listen to the song very loud in a dark room and watch the animation. As the camera circles the tower and eventually dives into the open mouth of the skull, I had to ask myself, “What do I want to discover down there?” My imagination answered with the vision of a sea of maggots. I wanted to see a writhing sea of maggots, and for my face to rise up from below the swarm, while singing.

Yes, there were a number of mechanical components which needed to be devised in order to bring some of these ideas to life. Thankfully, I was able to call in the support of a few very great friends to assist me with the design, construction and operation of certain parts. Others, I improvised in my shed and made the final adjustments on set. It’s all fairly cheap and nasty, “McGuyver” kind of shit, but it worked.

All that aside, I wanted everything (besides the animation) to be absolutely real. So what you see is exactly what happened. Me covered in live maggots, me with my mouth filled with live maggots, et cetera. How was it done? By crew members tipping buckets of maggots over my face or into my mouth. I’ve always had a fascination with maggots, spiders and great white sharks. Unfortunately, great whites aren’t quite as easy to get hold of.

The redback spider you see in the video was also real. Actually, she was a real pain in the ass to work with, since that breed is not generally aggressive toward humans. They love to hide in dark crevices. I was the handler for that shoot but, no matter how gentle I was with her, all she wanted was to drop away and hide! Of course, I wore gloves since they are very poisonous. I have to thank Garth for his patience for that particular shoot, as I spent a lot of time attempting various ways to coerce her to “perform” in the way I had in mind. She was one of several, which a friend of mine and I had collected and fed during the weeks leading up to the shoot. Once the shoot was complete, I took all of them to some nearby bushland and released them.

As a big fan of horror films, I’ve always been a huge fan of practical effects rather than superimposed or computer-generated stuff. From Lon Chaney to Tom Savini, I’ve always admired the “Scream Greats” who weren’t afraid to go the extra mile and really get their hands dirty. Nothing gets under your skin quite like the real thing.

The “lightning demon”, as you put it, was Garth’s idea. He’d been wanting to experiment with filming me underwater since one of the earlier videos. I loved the idea, but it was one of many which we had to abandon due to time restraints. I’m glad this was the case, as it fit so perfectly with ‘Twined Towers’. Again, this was a practical approach. Both of us would drop below the water and I’d attempt to actually sing to the track which was blasting from a waterproof bluetooth speaker. There are only so many words you can sing (or scream) underwater before you run out of air, so I’d have to rush to the surface, coughing and spluttering pool water, between sections. Garth inverted and further manipulated the colours in order to achieve the strange effect you see in the final cut. 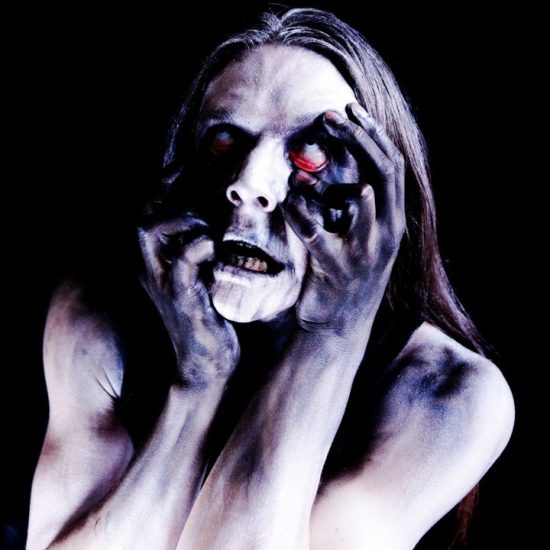 Conceptually, how important was it for you to directly transfer the lyrics/the vocabulary used in the lyrics into moving pictures? Was it, for example, the idea to let Cain appear as the “lunatic skull”? And is the thing that “climbs up your spine” in your lyrics the spider appearing in the clip? Or didn’t you converge the lyrics into pictures, but rather tried to capture the feeling, the vibe, and the atmosphere of the music in the pictures?

Cain: I definitely wasn’t interested in getting caught up with lyrics. The main thing I rely on is to listen to my subconscious and stay true to that. The mood of the song naturally gives rise to images and symbols which seem to match the atmosphere of the music. When Garth suggested the underwater shots, even though I hadn’t envisioned that, I could immediately imagine how well that could work in the video. The music-box ballerina was something I’d had in the back of my head for a while, as a way of harking back to the real-life ballerinas featured in the previous videos. When I listened to the song looking for accompanying visuals, she popped up very profoundly with a spider crawling across her tiny little face and arms.

When you dissect these symbols, it’s all very personal stuff which is directly linked to my life experiences. Not that this was my intention, but more something that unfolded along the way as I connected the dots and worked out where these things were really coming from. The ballerina symbolizes people who had suffered under narcissistic traits I exercised for a large portion of my life. Thankfully, I have found many wonderful teachers over the years who have helped me identify and dissolve these types of destructive thought patterns and behaviours. I still have plenty of other demons to work on, but I’m a far less poisonous creature than I once was.

I believe the spider is actually a symbol of my younger self, and I chose the redback specifically as a sign of my West Australian heritage. We grow up with these little devils all around us here. At home, at school. Everywhere. They’re always around. In summer, they bloom and sprawl like bulbous little black and crimson-streaked flowers, infesting backyard fences and sheds. I used to catch them and put them in the desk trays of other kids when I was in primary school, hoping it would lead to some dramatic excitement involving ambulances and screaming children and teachers. It never did though. All they ever do is hide!

While the ‘Sere Money’ visuals tell a feverish, dreamlike story of struggle and the quest for transmutation of suffering, I guess ‘Twined Towers’ is like becoming so addicted to suffering that you get lost in the dark and suffocated by it.

Last questions: Are you already working on moving pictures for another track of yours? Or is there something else brooding in the camp of THE AMENTA?

Cain: This piece will officially complete the Revelator video collection. As an exciting bonus, the video will be accompanied by a very limited release of a split cassingle, thanks to Plain Disguise. The split will feature THE AMENTA (‘Twined Towers’) on one side, and ABORYM on the other. A fantastic union of boundary-pushing bands, and a very unique and rare collector’s item.

I’m sure we will probably work on more videos in the future, but there are no specific plans as of yet. There is, however, a harrowing new collection of grizzly sonic treats in the works, but I can’t say too much about that just yet! Let’s just say we haven’t been lazy. Stay tuned!