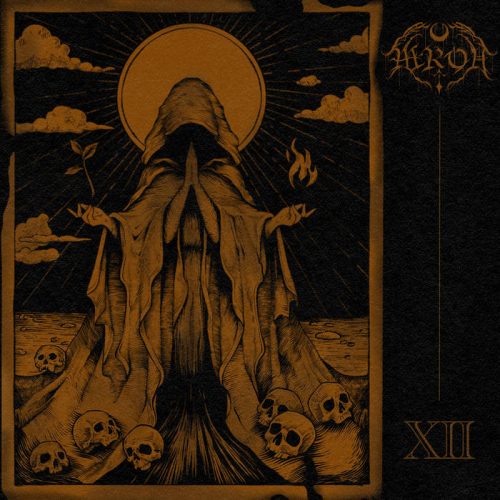 If there’s one thing that XII, the second album from Russian trio Mroh, can tell us it’s that it definitely is possible to have too much of a good thing.

Because, at twelve tracks and a whopping seventy-three(!) minutes in length it is most definitely far too long for its own good.

That being said, it also demonstrates that Mroh are pretty damn good at this whole “Atmospheric” Black Metal thing, and well worth getting to grips with if you have any appreciation for the more “blackened” arts… even if chances are you’re going to find the whole record a bit too much to sit through all in one go.

So, because of the sheer length of the record (which could easily, easily, have been cut into two shorter albums, or one shorter album and a companion EP) I’m going to focus this article purely on the highlights – the strongest songs, the ones I think would make the best album if XII were cut down a little (although they’d obviously have to change the name then) – with the ones I leave out being more in the vein of good, solid “bonus” cuts that are still well worth listening to… if you have the time.

Aptly-titled opener “The Beginning”, of course, more than justifies its place, setting the scene with its gleaming tremolo melodies and simple yet subtly nuanced drum work, as does “Whispers From Nowhere”, whose blast-propelled power and scintillating trem-lines – combined with some suitably vicious vocals and the occasional splash of moody atmosphere – make for an undeniably electrifying experience.

“Dreams of the Past” is even more atmospherically-inclined, utilising a more measured pace and a greater sense of light and shade to really open things up, before “The Revelation of The Sages” mixes things up even further, juxtaposing soaring melody, introspective ambience, and weighty riffage together in one epic package.

The stunning “Ritual of Change” is another major highlight, blasting and brooding with equal parts scything speed and smouldering passion, as is its darker (and arguably even more dynamic) cousin, “Tree of Knowledge”, which feels like it’s undergoing constant evolution and mutation even as you’re listening to it, moving from slow-burning solemnity to heart-racing intensity, from dense, rhythmic riffage to eerie, space and ambience, or any mix of these elements, over the course of just over five-and-a-half minutes.

“Struggle and Confrontation” is not only the heaviest track on the album, featuring some truly aggressive guitar work as well as a series of absolutely thunderous kick and blast patterns, but also the band’s longest and most ambitious composition so far, running to a little over nine massive minutes.

And yet it doesn’t feel that long, largely due to the sheer momentum of the music, but also because the whole track is intricately, immersively arranged so as to flow seamlessly from one moment to the next in a way that never even threatens to break your concentration.

And then there’s captivating closer “Midnight Mist” which errs more towards the “Post-Black Metal” side of things in order to end the record on a note of bleak, haunting beauty that should, hopefully, leave you wanting more.

Now, obviously I’ve broken one of the cardinal rules of music writing here – reviewing the album I wanted, not the album I actually got – but I think it was worth it in this instance, as while the tracks I’ve left out of this review (“Secret Scripture”, “Dark Ritual”, “Seal of Curse”, and “The Nightmare Catcher”) aren’t bad by any means, and their inclusion certainly doesn’t ruin the record, they still don’t really offer anything to the album as a whole that isn’t done better by other, superior songs.

It’s these tracks in particular then that I advise you focus on – especially if you’re a fan of similarly moody Atmospheric/”Post-” Black Metal bands like Harakiri for the Sky, Anomalie, and Der Weg Einer Frieheit (whose new album I’ll also be reviewing very soon) – because although Mroh may not have produced a perfect album here, its highlights are most definitely worth your attention.