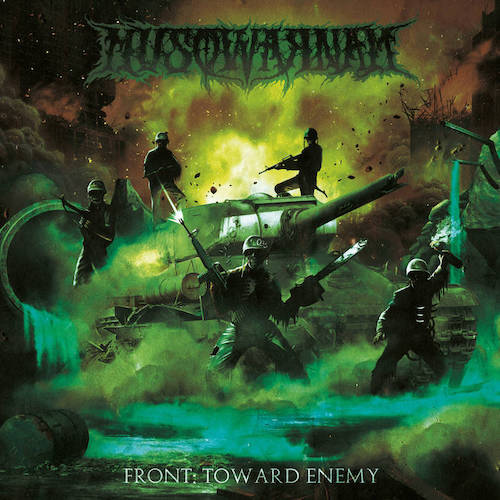 This is the time of year when ardent fans of metal, or at least the ones who enjoy bestowing accolades via year-end lists, are thinking hard about what they’ve been listening to over the last 11+ months. As all such list-makers know, it’s a time of year when December releases tend to get overlooked, even though the release schedule does tend to slow down some as we barrel ahead toward December 31st.

We’re probably as guilty of this as anyone else, but we’re still making an effort to keep at least one of our eyes focused on the horizons ahead, and the truth is that some very good records are still set for release this month, and Husqwarnah‘s debut album Front Toward Enemy is one of them. It’s so good that devoted fans of death metal might want to check it out before putting the finishing touches on their year-end lists.

And although we’re still a day away from the album’s official release, you can check it out right now, because we’re now hosting the premiere of Front Toward Enemy in its entirety. 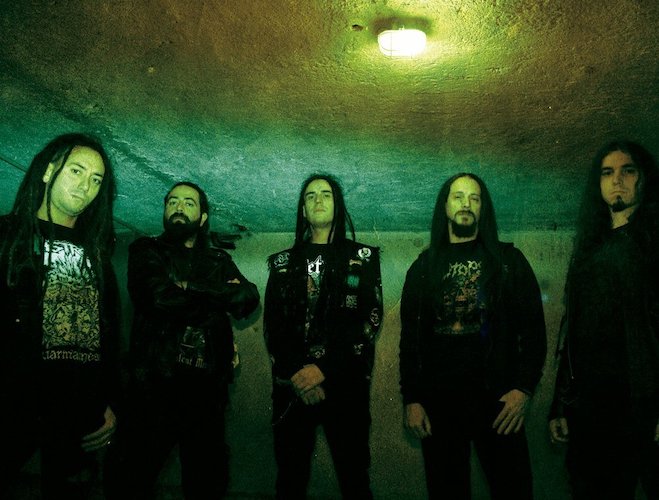 Husqwarnah have unapologetically taken their influences from ’90s death metal, in the vein of such titans as Asphyx, Bolt Thrower, and Benediction. They name their album Front Toward Enemy, and they indeed go to war in their music, using an armament of organ-rupturing drums, thick, jolting, lead-weighted riffs, vicious seething leads, voracious guttural growls, and blood-lusting screams.

The physical thrust and rhythmic cadence of the music is viscerally powerful and compulsive — it relentlessly attacks the listener’s neck and spine. The impact is particularly irresistible in the album’s pile-driving mid-paced tank attacks, and the even slower exercises in oppressive, morbid horror (e.g., the opening and conclusion of “Screams From the Cellar”) but also gripping when the band open up the throttle and surge ahead in ravaging assaults of galloping and battering drums, swarming guitars, and blistering screams

However, it will only take you about 10 seconds (the first 10 seconds of album opener “Melting Face”) to realize that Husqwarnah are also really good at setting hooks — and they do that relentlessly as well. Some of the hooks are embedded in the powerhouse rhythmic grooves, but many also surface in the melodies that the band thread through the songs — melodies that shift the mood and find sticking points in a listener’s cranium.

Moreover, the band pick their moments to create eye-popping fireworks displays with dive-bombing, fire-breathing, and slitheringly sinister guitar solos (maybe the best of which lights up “Vigo”), and they peppersome of  the songs with other little surprises that bring big smiles (such as the catchy little start-stop bass and guitar duet that takes place in the middle of the crushing “Ignoto1”, and the manic jittering bursts which bring that track to a close).

And who would have predicted that they’d end the album with a cover of Rush’s “Dreamline”, which happens to feature a terrific guest vocal appearance by Dark Tranquillity’s Mikael Stanne? That’s the biggest surprise of all on the album, and it turns out to be an enormous kick in a record that’s full of them. They really make “Dreamline” sound like it was originally written as a melodic death metal song.

And so, Husqwarnah definitely do go to war — this is an unmistakably savage and electrifying album, one that bludgeons and eviscerates in thrilling fashion. But you’ll discover that the songs are also really well-written; they merit the name “songs” — well-structured, dynamic, and presenting a pleasing degree of variety. The band aren’t reinventing the wheel or attempting to experiment with tried-and-true traditions (well, except for that eye-popping closing track), but they’re just so damned good at what they’ve set themselves to do that Front Toward Enemy proves to be an enormously addictive pleasure.

Front Toward Enemy will be released on December 3rd via Fuel Records (LP) and Reborn Through Tapes (MC). The album has a powerhouse sound — it was recorded, mixed, and mastered by producer Carlo Altobelli at Toxic Basement Studios (CRIPPLE BASTARDS, INSANITY ALERT, EKPYROSIS) in Italy. The striking cover artwork was created by Solomacello (FULCI, SADIST).