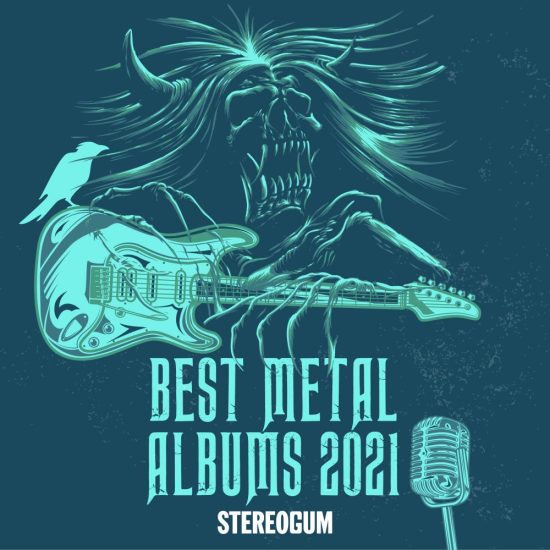 Stereogum easily qualifies as one of the “big platform” web sites whose year-end lists of metal we perennially include in our LISTMANIA series. Of course, the site appeals to an audience of music fans much larger than devoted metalheads, but its staff includes a talented and tasteful group of metal writers who among other things are responsible for the site’s monthly “The Black Market” column, which has been a great source of discovery for extreme music for nine years running now.

It follows that Stereogum‘s annual metal list is one I especially look forward to seeing every year, and the 2021 edition appeared yesterday. It again consists of only 10 entries, collectively assembled by Ian Chainey, Aaron Lariviere, and Wyatt Marshall. It’s preceded from this statement by Ian: “In keeping with the grand tradition, Aaron Lariviere would like to remind you that ‘this list will disappoint you.’ He’s right. Instead of bests, we pick favorites. That always makes for a fittingly weird list. Hell yeah.”

Usually Stereogum’s year-end list is introduced by a lengthy essay that reflects on the year that’s about to gasp its last breath. This year it’s devoted to introduction of “the Game Of Metal“, “a tabletop game for old readers to print out and play and wonder what the hell we’re doing with our lives”. There’s a video and a podcast to explain the rules too. I haven’t taken advantage of this yet, so I offer no review.

What I do offer, snoopy leech that I am, is a re-print of Stereogum‘s year-end list, but my blood-sucking thievery doesn’t extend to copy-pasting the mini-reviews that accompany each selection. As usual, they’re very good reads, but you’ll need to go HERE to read them.

As for the list itself, this is one of those rare years when I actually listened to almost all of the albums that appear here (the sole exceptions being the ones from Ethereal Shroud and Sadness, and I’ve been meaning to get to those). I can say that I thoroughly enjoyed all of the albums I did listen to, and am therefore happy to see them among the favorites of this group of writers. Would you put any or all of them on your own Top 10 list? I have no idea. Might this list lead to some worthwhile new discoveries for you and others? I certainly hope so.