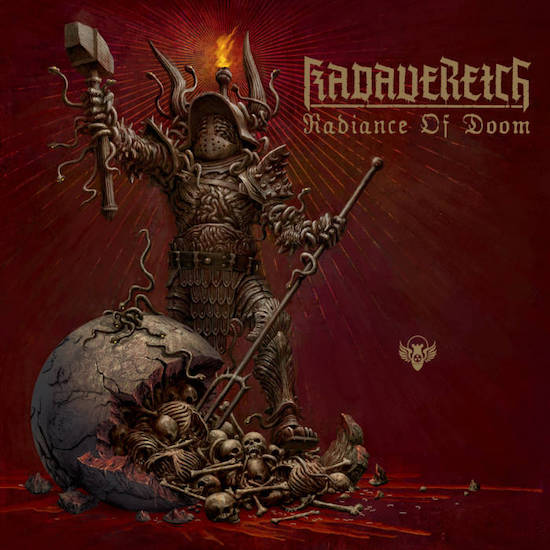 On December 18th Godz Ov War Productions will release Radiance of Doom, the debut EP of the Russian blackened death metal band Kadavereich. Apart from a reference that the line-up includes members of Grond, Act Of God, and Gwarloth, Godz Ov War gave us no hints about the nature of the music the band had created when it asked that we host the EP’s full streaming premiere today. And thus the feeling of shock and awe that we experienced when listening to it was all the more stupefying.

In a nutshell, the sonic power of the EP is immense, and its impact is utterly devastating (but equally electrifying). It chokes the senses, blots out the ability to think of anything else, and becomes an all-consuming, bone-smashing, mind-mauling experience in remorseless destruction, abject terror, and paralyzing agony. If you’re looking for a transfixing visceral experience and don’t mind being subjected to ruthless audio ruination, you’ve come to the right place. 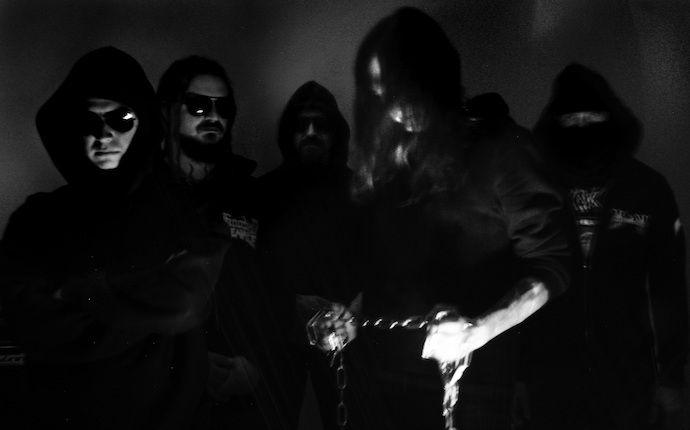 The EP’s opener “Invincible Sun Devourer’ is a perfectly named track. It does sound like the workings of a titanic engine capable of consuming suns. It strikes in a dense, distorted, scathing hurricane of sound. Immense pounding drums with a martial aspect thunder through the overpowering storm, and gargantuan growls roar from cavernous depths. A snare drum clatters, and the granite-heavy riffs writhe, slash, and stomp. Viper-like leads slither, swirl, wail, and convulse in searing spasms. The rhythms convulse as well, stopping and starting, lurching and surging, finding new methods of decimation.

The following track, “Caldarium of Boiling Blood“, is perhaps less immediately ruinous, proceeding at a heaving mid-paced momentum, but the music also explodes in violence, the snare drum spitting bullets, the guitars boiling in vicious frenzies, the solos maniacally shrieking toward the heavens. The devastating power of the song is no less apocalyptic than in the opening track, and when the band inflict sequences of brutish, pile-driving punishment, it will get heads moving too.

“CCCIII” greets the listener with a stomping death march, but as the bestial roars and howls reverberate from abyssal depths the music changes, and changes again, as the riffs jab and jackhammer, seethe like a mass of disease, or manifest like a feeding frenzy of supernatural horrors. The lead guitar emerges again, creating sensations of unearthly agony and ecstasy. A slow melody surfaces, giving the music an aura of hideous grandeur — a new dimension to Kadavereich‘s vision of apocalypse.

The distorted grinding chords of “Dismal Radiance of Doom” rise and fall, creating a mood of suffocating oppression; the percussive pounding is earth-shaking; the vocals are as malignant and as cold-blooded as ever; the piercing wails of the guitar leads are utterly dismal and distraught. Like grasping, broken hands, the music at times seems to channel wretched prayers for relief, and the answer comes in brutal, savage rebuffs. Mercy is not in this band’s vocabulary, nor is remorse.