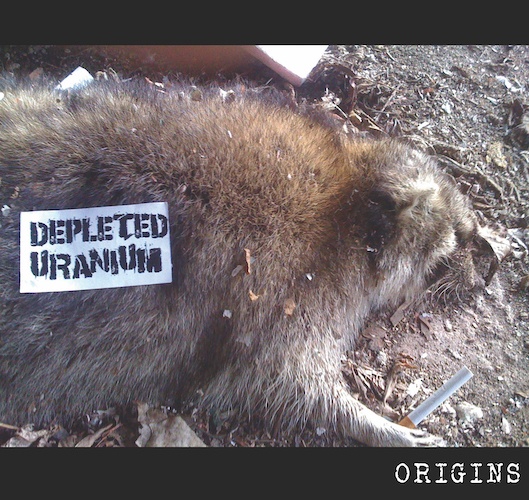 When does insanity begin to make sense? When you yourself begin to feel like you’re losing your mental moorings? When the whole fucking world seems to be going insane around you? Or when you realize there’s an appealing method to the madness you witness? Or some combination of all of the above?

These ruminations were spawned by listening to Origins, the new record by the brawlers and mad scientists in the Canadian band Depleted Uranium, which is set for release on January 28th of the coming new year. The music (which could be thought of as a blending of powerviolence and math metal) genuinely sounds insane — furiously so — and yet something about the experience makes sense. Not just because it sounds like people throwing away mental shackles and conventions, but also because the music simultaneously gets its hooks in your head. There’s a sense of order and precision of execution in it, at the same time as it seems completely disruptive of order. 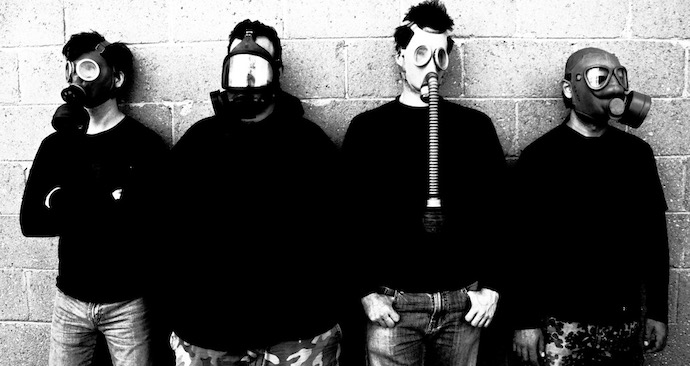 Origins is this band’s second album, though it contains music from the band’s earliest years in the decade the core members have been together. The first one was a self-produced, and self-titled album released in 2018. The band explain how the two relate to each other, and about the intent behind the new one:

“Origins is our band’s history of who we are and where we come from. It is meant to be listened to in reference to our self-titled, debut release, Depleted Uranium, to give a perspective that will also further be referenced in our future releases. Both lyrics and music hold a high tension and are expressed without hesitation. Both are relevant to our time and space of creation and are embodied with existential yet direct meaning.

“The Album as a whole was a statement of youth being dissatisfied with the existing conditions of reality and channeling our experience into what it is today. ‘If one cannot withstand the hot glow of anger upon the discovery of a wrong, then time is wasted thinking deeply’. Our band name, our lyrics, and our music are a product of the system with the right individuals as the recipe. Our message in the album is to strive for personal freedom and to focus on what you want rather than what you don’t. This album was a path out for all of us.” 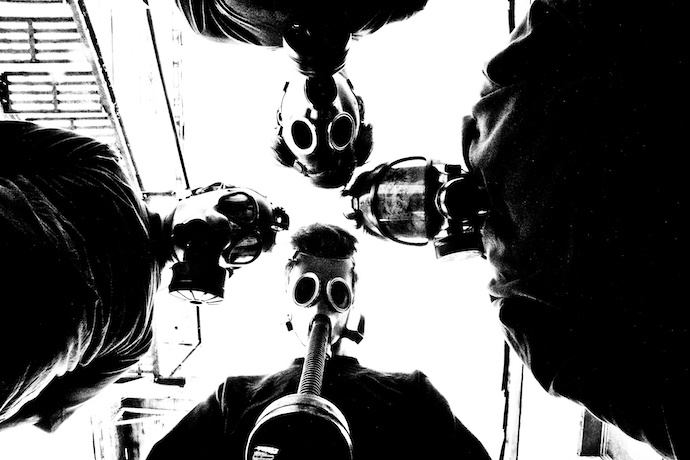 What we’ve got for you today is the premiere of a track from Origins named “Beta Particles“. In introducing it we first feel compelled to ask bassist Corey to take a bow. The pulsating hum of his instrument is one of the key factors that provides a head-hooking through-line within the general mind-bending insanity of the song. He’s not acting alone in that respect — there are moments when the feverish sandpaper abrasion of the guitars create a strange kind of rising and falling harmony with the bass, and the hard pump of the drums is a factor as well.

But around those organizing through-lines the song really does get crazy. The layered fretwork mutates continually — frantically skittering, darting, squealing, braying, and writhing, generating feelings of derangement and fury. But the real fury comes through in the throat-splitting, blood-spraying vocals, which sound just as unhooked and unhinged as the guitar work.

But to return to where we began, there’s something about this maniacal discharge that’s infectious. It does get its hooks in the listener’s head, and burrows them deeper and deeper the more often you let the song scrape and squirm its way through you.

In addition to our own reactions, we’ll share some words about the song from the band:

“Lyrically, this song is about being socially marginalized. For whatever reason. It’s about society’s aim to ‘cure’ those who are different. To assimilate or destroy vs accept, by any means necessary. Musically, it was born when we were starting to solidify in our songwriting and the process was fairly quick. The big transition in the middle was due to our 4-track recorder eating the tape of the first demo recording and when we listened back, it made the song. Once Blair (2nd guitar) joined, it was the song that began highlighting the simplified dual guitar harmonies.”

Credits: Origins was produced by Andrew Murray, mixed by Dave and Zeppelin at Encore Music Studio, and mastered by Alberto Bandino at Cutfire Studio. The album will be out on January 28, 2022 with the physical CD including an exclusive bonus track, and it comes recommended for fans of Dillinger Escape Plan, Converge, Charles Bronson, Orchid, and Spazz.

Check the links below, and then give a listen to “Alpha Particles“, another track which turns out to be just as head-spinning and just as oddly compulsive as the song we’re presenting today.