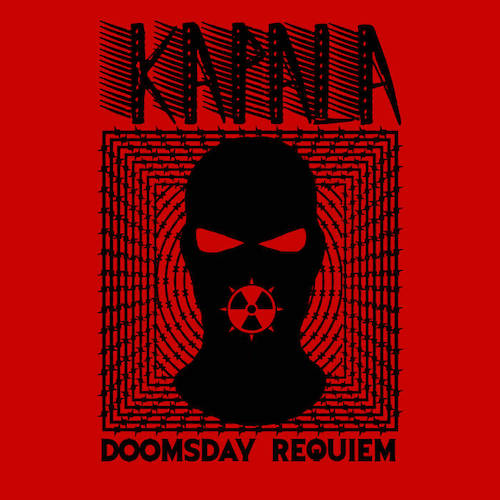 Few bands on the planet embrace and channel the violent destructiveness of War Metal with as much fanatic fervor as the Kolkata-based band Kapala. Their slaughtering amalgam of death metal and harsh noise seems to be fueled by hate and driven by a disdain for weakness of any kind.

And yet their talents are multi-faceted. There is much more going on within their creations than unapologetic sonic annihilation, and that makes their music fascinating and mind-altering as well as ruinous. It really doesn’t sound like anything else; indeed, linking it with War Metal, as that sub-genre is commonly understood, might be more misleading than descriptive.

Kapala‘s new 22-minute EP Doomsday Requiem is powerful proof of these points. It is indeed ruthlessly destructive and harrowing in its intensity, but its musical craftsmanship is also impressive, revealing nuances and embellishments that link it unmistakably to the ancient legends of the Indian subcontinent. The music creates an atmosphere of mysticism and spiritual possession, capable of inducing perilous trances.

Those qualities — and a panoply of killer riffs and electrifying rhythmic assaults — distinguish the EP from the kind of War Metal that might be cathartic on a first listen but doesn’t lure many people to listen more than once. But you don’t have to take my word for it. You can test out the truth of these statements for yourselves, because today we premiere a full stream of Doomsday Requiem in advance of its release by Dunkelheit Produktionen on the last day of this wretched year. 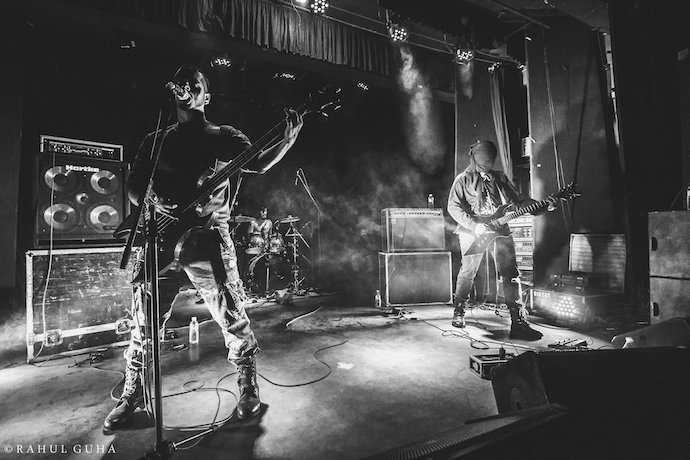 The EP’s introductory track provides an immediate sign of what I’ve tried to explain. “Raising the Tattered Banner” is a fascinating experience, using a heart-beat pulse and a percussive clap to make it sound something like a primitive ritual stomp of massed congregants, surrounded by an amalgam of weird and abrasive electronic elements that create a sense of mounting mayhem.

The following song, “Exodus of Victory”, sends those imagined congregants into a dervish-like, Kali-worshiping frenzy. It joins together strange wailing melodies that generate an esoteric and ecstatic atmosphere, piston-pumping drum rhythms (and off-kilter beats that sound like an old tribal drum), booming bass tones, hammering and jittering riffage, and savage howls to create a feeling of violent occult trance that’s contagious, and it culminates in a hallucinatory cacophony of harsh noise.

“Doomsday Arsenal” shifts gears, proceeding in an imperious stomp and ejecting blasts of brazen guitar distortion. The drum patterns morph, expelling bursts of destructive mania, as the guitars writhe and scream and the bass bubbles and thrusts. This song too seems like the soundtrack to a primeval, mind-mutating ritual, lit by torches, lubricated by blood, in an arena walled by skulls.

Kapala save the longest track for last. A distorted symphonic overture sets the stage, very much in keeping with the song’s title — “Requiem“. From there the band take over, melding an undulating bass line with bullet-spitting percussion and slow, reptilian riffing. The menace in the music is unmistakable, but as it changes (and it does change repeatedly), feelings of hopelessness flow through. The drumwork continually seizes attention, convulsing and cavorting, but the guitars drench the senses in despair and pain as the vocals vent rage and torment.

Like all the other tracks, this final one also proves to be as entrancing as it is unnerving, until the whine of feedback paves the way into a paroxysm of violent fever… and then the maw of the void opens wide.

Doomsday Requiem is set for release by Dunkelheit Produktionen on December 31st, just in time to finish killing 2021. It’s available for pre-order on vinyl, CD, and digital formats, along with apparel.

4 Responses to “AN NCS EP PREMIERE (AND A REVIEW): KAPALA — “DOOMSDAY REQUIEM””