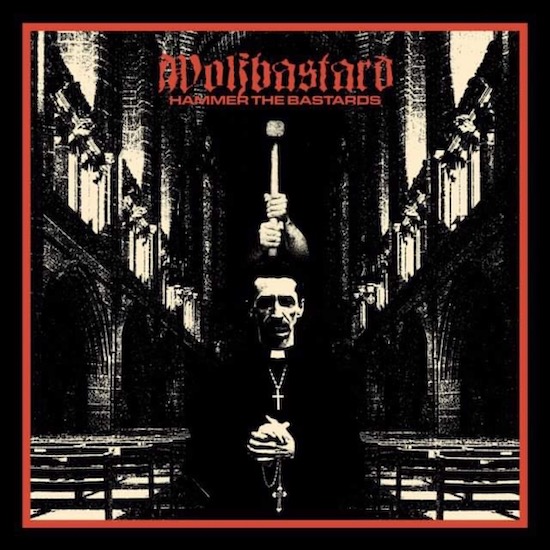 Anyone with eyes to see and a mind that hasn’t been brainwashed or turned into docile slag knows full well that the world is mainly ruled by bastards — bastards in the boardrooms, bastards in the halls of government, bastards in the church. They do what they want, they get their way, and they’re rarely held to account for all the ways in which they make the lives of the powerless so much more miserable than they need to be.

What ought to be done? Isn’t the answer obvious? HAMMER THE BASTARDS.

That’s the name Manchester (UK)-based Wolfbastard gave to their new third album, which is set for release by Clobber Records on January 14th, and they back that message to the hilt with their music, which is a feral and ferocious barrage of D-Beat, crust punk, black metal, and blackened hardcore that takes no prisoners and asks for no mercy.

The press materials for the record include an evocative summing-up of the sensations the album channels, and it’s worth quoting here before we give you our own impressions along with a complete streaming premiere: 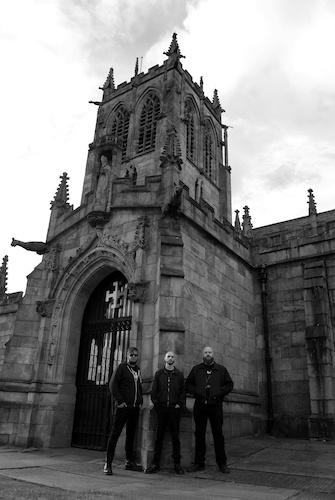 “Riding high on an adrenaline rush of violence, drunk on blood and destruction, the pack are unleashed. Each throat torn out in a beautiful crimson shower is an amphetamine injection to the heart and they kill faster, die harder, laugh louder – lost in a glorious madness of power and ecstasy. Their pulses racing like a blast beat they career from room to room, house to house, street to street…frenzied carnage beyond imagining. They may only have the night, but this night feels like it might just last forever…”

The PR materials also refer to Wolfbastard as “the deformed, abandoned offspring of Venom, Motörhead, Darkthrone and Discharge on a mission to destroy”, and that’s pretty on-point too, as are the comparative references to such bands as Extreme Noise Terror, Doom, Municipal Waste, and Hellbastard. 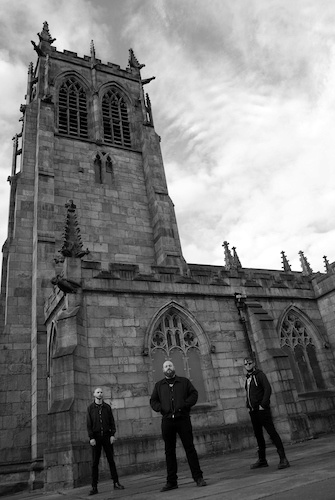 On Hammer the Bastards Wolfbastard whip up a mean storm right from the go with “Can’t Escape the Grave”, which discharges viciously scathing and blazingly brazen riffs, backed by full-throttle drum fusillades, gut-busting bass work, and blasts of savage vocals whose snarls, screams, and yells are red-hot embodiments of rage. There’s enough energy in the song to power a metropolis, and enough hooks to fill a fishing trawler.

With that song having kicked adrenaline levels up toward the rafters, Wolfbastard keep the pulse-rate high in “Black Friday”, continuing to expel heart-pounding drum-work, blast-furnace riffing, and teeth-bared, coming-for-your throat vocals. But they also ease back on the throttle, allowing the bass to grumble and the chords to bring down a rain of bleakness from sodden skies.

“Black Friday” is a clear sign of Wolfbastard‘s songwriting dynamism, but certainly not the only one. While it’s easy to get addicted to the ferocity that the band defiantly unleash throughout the album, and to look forward to each new feral outburst, with all the head-hooking riffage and rhythmic propulsion they bring, the band also wisely pick their moments to interweave other less explosive passages, usually using the reduced momentum to sink the mood into feelings of disgust, despair, and seeming hopelessness. 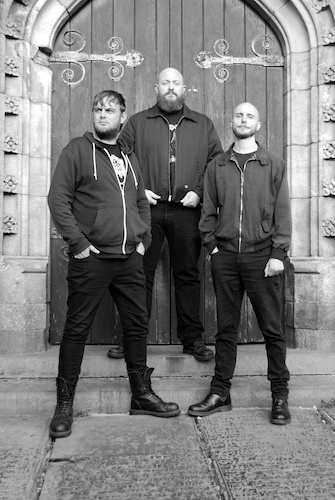 But there’s dynamism on display even when Wolfbastard are in full-on riot mode — which is most of the time. They seamlessly switch between bursts of blasting and blazing black-metal hostility and the stripped-down beats and chord progressions of punk. The vocals are never less than incinerating in their confrontational intensity, but even there the full-bore, throat-ruining fury reveals itself in different ways, and the band also occasionally throw in some blood-boiling solos, as if the songs weren’t superheated enough. Moreover, the album doesn’t banish the bass to the back room, instead allowing it to make its presence felt through the evenness of the mix (and some quick, skull-rattling solos).

The songs don’t overstay their welcome, staying mainly in the 2-3 minute range, but Wolfbastard pack a lot into these short, sharp cuts — a lot of bruising punch, a lot of compulsive hooks, and a raging spirit that won’t be denied. A grim world view comes through in the music too, but hell, there’s not a lot of uplift to be found by anyone who looks around with clear eyes, is there?

The album will be available on vinyl, CD, cassette, and digital formats, and pre-orders are open now.