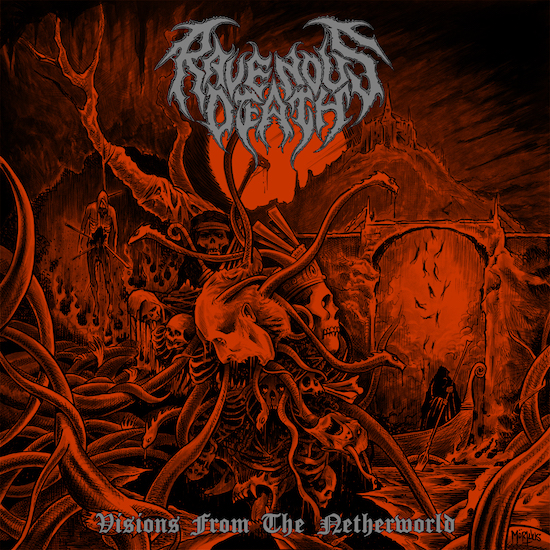 As proof of this claim, we present the premiere stream of “Ascending Chasm“, which is the new record’s longest track and the one that brings it to a close. 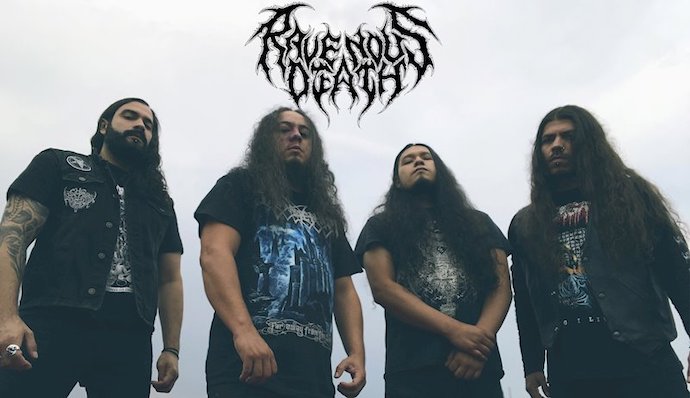 Ravenous Death devote almost 8 1/2 minutes to the song, and make tremendous use of that time, creating a relentlessly dynamic experience that merits the term “transportive” — even though the realms to which it transports the listener are the labyrinths of nightmares.

At first “Ascending Chasm” manifests as a staggering supernatural monstrosity that proceeds at a lurching, shambling pace. Immense distorted chords, shrill squealing leads, and hideous guttural roars create an atmosphere that’s both abysmal and frightening. Gradually the music becomes more feverish, and engulfs the listener in an electrifying torrent of wailing and moaning tones that seem to swirl within an other-dimensional ether, and the vocals themselves become a screaming, sky-high embodiment of derangement.

Led by the swift and sharp pop of the snare drum and the magma-like bubbling of the bass, the riffing insanely spasms and rapidly jolts the senses, creating a blasting and roiling sonic maelstrom. When the pace steadies into a pounding rhythm, a fantastical guitar solo emerges, creating sounds that are esoteric but seductive. From there the band continue to shift the rhythms and tempos, pushing and pulling the intensity of the music but never freeing the listener from the presence of madness, mayhem, and of course the morbid rot of death.

Both crushing and dismal, frenzied and ferocious, harrowing and hallucinatory, “The Ascending Chasm” is an altogether gripping abomination of sound that again marks Ravenous Death as an unholy force to be reckoned with.

The CD edition of Visions from the Netherworld is due out on January 24th through the Spanish label Memento Mori. It is blessed and cursed once again by cover art created by the masterful Mörtuus. The sound quality is also a step forward, and a share of the credit for that goes to Loïc Fontaine, who mastered the album at Krucyator Studio in France.

For more info, check the links below — and also expose yourselves to the previously released song “Gore Vault Dismemberment”