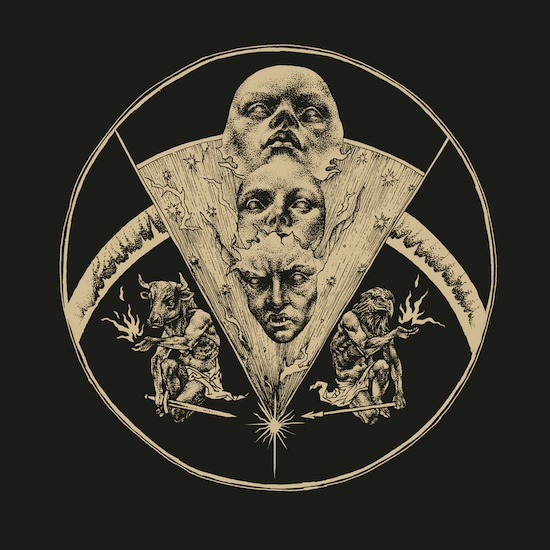 The Canadian band Idol of Fear took their name from a quote in Ingmar Bergman’s 1957 movie Det Sjunde Inseglet (The Seventh Seal): “We must make an idol of our fear and that idol we shall call God.” They recorded a three-song demo in 2013, and followed that with two full-lengths, All Sights Affixed, Ablaze (2014) and Grave Aperture (2018). On March 11th, they will add to those with a third album via their own Somnolence Productions label. Its name is Trespasser.

The band believe it is their most powerful and cohesive album to date, and they anticipate that listeners will hear a clear progression from their previous work — and might be taken aback. They expect that it will come out of nowhere for many.

In addition to helping spread the word about the impending advent of this new full-length, we’re also providing a tangible sign of what it holds in story for listeners, through our premiere of a lyric video for a song called “Cheirotonia“. 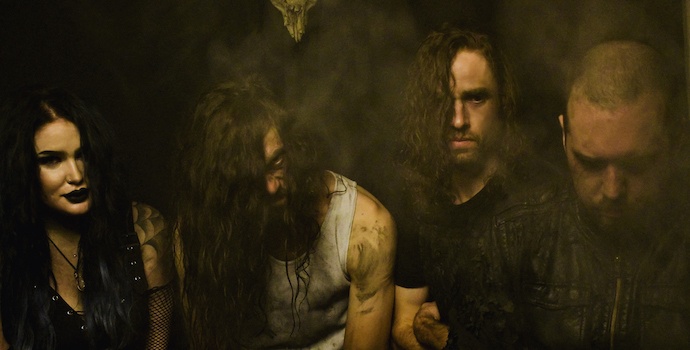 The word “cheirotonia” has a multitude of possible meanings, one of which refers to the laying on of hands and all of which are connected through the idea of a passing on or establishing of authority. Why the band chose it as the title of the track is a mystery (at least to us), but we do have an elucidating comment from the band about the song as a whole:

Opening with a chant from Pavel Chesnokov’s “Let My Prayer Arise”, “Cheirotonia” was largely inspired by our own process of drawing upon the heavy darkness that continually creeps in the periphery of our lives outside the band. In that sense, it is perhaps one of the more introspective/personal songs on a largely cryptic album. Musically it flows like the river Styx, gliding as a spectre, with winding tragic melodies that seek to haunt, and strong driving rhythms that propel its bitter delivery.

That comment provides a meaningful preview to what you’re about to hear. The poetry of the lyrics is eloquent and frightening, providing a shattering portrayal of dismay and despair, yet in its bitterness, shaded with sarcasm, the words may also be understood as expressing a revelation of emptiness that is triumphant and empowering.

Musically, the song is a stylistic hybrid that’s deeply haunting and even entrancing, but it too is a bitter revelation. The slow, ghostly wail of horns opens the song, along with solemn ecclesiastical chanting. Skull-cracking beats join in along with grim guitar emanations and torrid howls. The pace of the music remains steady, but the riffing transforms into a searing sensation.

The tragic wail of the opening persists, and bell-like guitar tones ring out in grief around the scalding vocals and the boom and snap of the drums. A feeling of anguish burns through the music, but a sea of soft ambience flows in, along with a mysterious rippling melody. The music ascends and shines, but never casts off the feeling of tragedy or the aura of mystery.

Dark and chilling, Trespasser is recommended for fans of Behemoth, Shining, Deathspell Omega, Mgla, and Emptiness. For more details about the release of the new album and how to order it, keep an eye on these locations:

One Response to “AN NCS VIDEO PREMIERE: IDOL OF FEAR — “CHEIROTONIA””