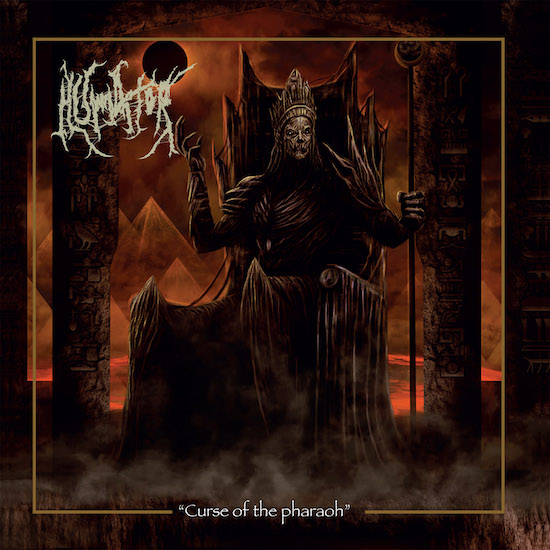 More than a dozen years have passed since the Italian/German death metal band Humator released their debut album Memories From the Abyss, but with a revamped line-up in place, and armed with a musical arsenal of obliterating and head-spinning proportions, they’re returning with a second album named Curse of the Pharoah that was inspired by Egyptian mythology and classic fantasy. It’s set for a February 28th release by the Italian label Time To Kill Records, but we have a full stream of it for you today.

This long-awaited return truly is an explosive one. With a modern production job that delivers both bunker-busting power and mind-piercing clarity where needed, the album spawns references to such old-school masters as Cannibal Corpse, Monstrosity, Suffocation, Sinister, and Morbid Angel, as well as the likes of Dying Fetus and The Black Dahlia Murder. The music is ruinously brutal and technically impressive, but displays a deft use of dynamism and melody that gives the tracks character and contagiousness. 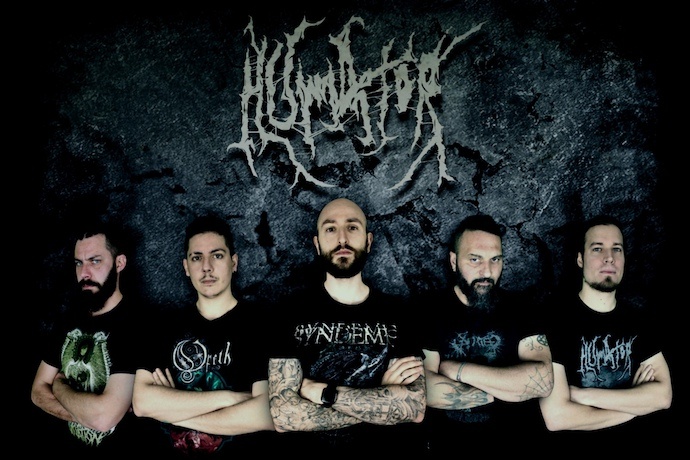 After a mainly ambient introductory track that sets the stage (or rather “Opens the Tomb”) in ominous and mystical fashion, the band turn themselves to what they do best — delivering a brutal beating. “Anachronism” erupts in a ruthless assault of grim, slashing and jolting riffs, frenzied guitar leads, roaring and screaming vocal hostility, and obliterating percussive fusillades and detonations. The song pounds with concrete-splitting force and ravishes with extreme ferocity.

Those same brutally violent tendencies are hallmarks of the rest of the album, but as the songs unfold they repeatedly show the ways in which the band keep listeners on their toes. The music often does feel like we’ve been dropped into a decimating war zone where mechanized strafing runs and carpet-bombing campaigns are under way, but in the midst of such stupefying assaults the band also execute surgically precise changes in tempo, rhythmic patterns, and riffing, while also lacing the songs with melodic motifs that provide internal continuity and with fluid and frenetic solos that create changing sensations of mysticism and madness.

The middle of the album is where Humator really shake things up. With “Into the Crypt” they slow the attack in order to create a crushing atmosphere of oppression, unearthly horror, and abject misery. That song is one of the true highlights of the album’s first half, thanks in part to beautiful but frightening guitar solos, utterly grim yet enthralling melodies, and the haunting acoustic guitar harmony that closes the song.

That closing segment turns out to be a segue into “Nynu”, a mesmerizing acoustic guitar instrumental that provides a mid-album interlude where muscles can be relaxed and breaths taken — and those opportunities should be seized upon, because after that “Apep” runs listeners back into the gauntlet of bone-breaking, head-hammering grooves, racing gallops, cruel and crazed fretwork, and a tandem of bellowing and screaming vocal aggression.

The grooves in “Apep” are so massively neck-wrecking that it’s one of the album’s most infectious tracks, but in that respect it has a lot of competition. Moreover, both there and in the succeeding songs the band also continue proving their knack for infiltrating catchy melodic hooks into their physically traumatizing and mentally discombobulating ravages, creating moods of mystery, menace, mayhem, and morbid gloom. The soloing also continues to be top-shelf (don’t miss the joyfully dancing ones that pop up in “Born to be Sacrificed” and “Arisen from the Ashes”), and of course there’s enough jackhammering and pile-driving going on to spawn visions of city-sized demolition zones.

Time To Kill will release the album in digipack CD and digital editions, and both are avalable for pre-order now: