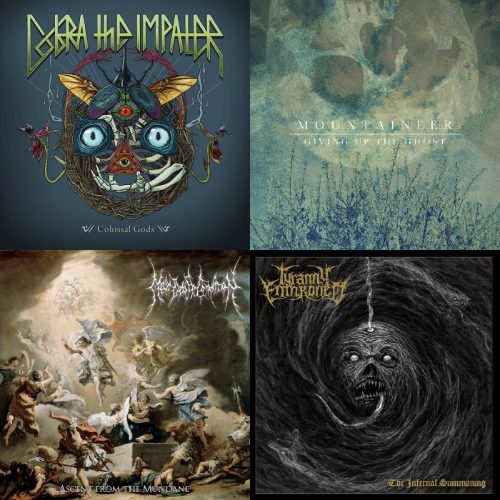 Is it just me or – after two years where time itself seemed to grind to a soul-crushing halt – does 2022 seem to be trying to throw everything at us all at once?

Honestly, it feels like I’ve barely had time to turn around and two months have already passed me by, leaving a ridiculous number of artists and albums unremarked and unreviewed.

Heck, I didn’t even do one of these columns for January (though if I had, it would probably have included Directional, Dysnerved, Mathan, and Wiegedood) so I’m even more behind than I thought.

It doesn’t help that February was absolutely packed with impressive new releases – including a number of unexpected surprises – so picking what and who to feature in this article was more difficult than usual this time (though, don’t I say that every time?).

Still, I hope you’ll like at least some of what I’ve chosen to feature today, which includes two bands from a little bit outside our usual spectrum, and two more overtly extreme artists making their long-awaited comeback after an eight year absence!

Don’t you love it when a band comes out of nowhere with a simple but oh-so-effective formula – think Mastodon meets Alice In Chains, with a dash of Byznantine-esque Prog-Thrash for good measure – and hits you right between the eyes with an excellent debut album?

Such is the case with Colossal Gods, the first release from Belgium’s Cobra the Impaler, which hits the ground running with the lustrous melodies and loping riffs of the title-track and then does not miss a single step over the course of the next forty-odd minutes.

Displaying both an impressive grasp of dynamic and an inherent gift for crafting a bonanza of intricate, interesting, and instantly-infectious hooks (the vocals in particular – primarily clean, but with just enough dirt to give them some solid texture and soul – provide a series of shamelessly sing-along moments without pandering to generic Pop-Metal tropes), every single song is a potential “hit”.

Whether that’s the muscular melodic stomp of “Blood Eye” or the more frantic Thrash-Grunge of “Tempest Rising”, the introspective Prog-Metal instrumentality of “Spirit of Lyssa” or the Alice In Chains meets Gojira mix of heart-wrenching vocals and gut-rumbling grooves that is “Scorched Earth”, each track easily stands on its own while also contributing to the greater whole by defining, and refining, the group’s multifaceted sound.

It helps of course, that the whole band are clearly very talented (the vocal harmonies and clean/harsh trade-offs never fail to grab your attention, and the drums – provided by a certain Mr. Dirk Verbeuren – consistently go the extra mile), but ultimately it really is the stellar songwriting which makes this such a stunning debut album.

As a matter of fact, the only minor criticism I have of Colossal Gods is that, if it were up to me, I’d have switched the order of “Demigods” and “Mountains”, as while both are fantastic songs, the former just feels like it might have served as an even bigger/better finale.

Still, make no mistake about it, this is a firm contender for my Top Ten of the year (so far) already.

MOUNTAINEER – GIVING UP THE GHOST

There are certain artists who tend to dominate the conversation and suck up all the oxygen in the room whenever they release a new album.

But while the release of Cult of Luna‘s new album definitely made it difficult to even get a word in edgewise about anybody else last month, I did happen to notice a bit of low-key chatter about Giving Up the Ghost from California’s Mountaineer… and I’m very glad I did, because it’s easily the band’s best work yet.

One thing which actively helps this album stand out from beneath the long shadow cast by The Long Road North this past month is the fact that it’s not really a “Post-Metal” album at all… it’s more of a moody, morose “Post-Hardcore meets Post-Rock” hybrid, and seems to take just as much (if not more) influence and inspiration from artists like Explosions in the Sky, Oceansize, and possibly even Radiohead, than it does the usual Neurosis/Isis/CoL triumvirate.

That’s not to say it’s lacking in heft, but the weight of these songs comes more from the band’s careful layering of tone and texture, allowing them to build up a more subtle sonic presence over time, rather than simply slamming you in the face with a bevy of bruisingly sludgy riffs.

Take “Blot Out the Sun”, for example, whose fluid ebb and flow of calming melodies and crashing guitars ultimately builds to a mighty crescendo, or the elemental push and pull of “When the Soul Sleeps”… two tracks which epitomise not so much the “heavier” side of the band, but rather demonstrate how carefully crafted differences in dynamic can have just as much of an impact.

On the flip-side of this, songs like “Bed of Flowers” and “Twin Flame” possess a doomy, shoegaze-y sound (don’t call it “Doomgaze”, I beg you) which has been compared to bands like Junius and SOM – although personally I would say a more accurate comparison, when taking this record as a whole, would be the latter-day works of Arctic Sleep or the uniquely introspective Post-Rock/Metal style of Callisto (a band who, in my opinion at least, remain one of the most underrated and underappreciated artists in the wider “Post-” scene).

All comparisons aside, however, Giving Up the Ghost is more than capable of standing on its own two feet and making a name for itself based purely on the strength of its music. And while it may be a bit of a slow-burner, give it some time and attention and it will repay your investment many times over across the next few weeks, months, and years.

NEAR DEATH CONDITION – ASCENT FROM THE MUNDANE

Any time a band makes a significant deviation from their established sound it’s going to cause consternation among their fanbase, and boy has the new album from Near Death Condition caused a bit of a rumpus.

Whereas the group’s previous three albums firmly established them as a bunch of Brutal Death-dealers in the vein of Suffocation, Defeated Sanity, or Deeds of Flesh (Evolving Towards Extinction in particular is an absolute monster), the Near Death Condition of 2022 is a very different entity indeed… although whether or not this change in sound was caused by a change in line-up, or whether the change in line-up led to the band’s change in sound, only they can say.

The lurching dissonance and droning anti-melody of “Witness of the Martyr”, for example, has more in common with the moody, post-Morbid Angel sound of Ulcerate, Barús, etc, whereas a track like “Wisdom of Meaningless” errs closer to Organic Hallucinosis-era Decapitated with its tangled, technical riffage, unpredictable percussive patterns, and ominous, oppressive ambience.

This newfound focus on obtuse, angular structures and gloomy, atmosphere-heavy sonic textures hasn’t robbed the band of their ability to cave your chest in at ten paces by any means – the churning blast ‘n’ chug of “Astral Birth” is proof enough of that – but there’s no denying that Near Death Condition are choosing, consciously, to walk a different path this time around… and it’s likely not all of their older fans will want to follow them.

Probably the most divisive aspect of the album will be the vocals, as new frontman Magnus (aka Florian Jacot-Descombes) delivers his abstract, esoteric lyricisms in a style that’s arguably more gravelly than guttural, and often stretches his vocal chords into a strangled, anguished howl reminiscent of Barús frontman Keithan.

That being said, personally I find that his vocal style fits the music far better than a standard death-grunt probably would, and adds a viscerally human element to the abrasive atmospherics and subtly-blackened, barely-controlled chaos of songs like “The Bridal Chamber” and the hypnotically-heavy title-track.

Sure, it’s not entirely perfect by any means – the two part instrumental finale ends the album with something of a whimper, truth be told – and those who prefer their music to be “all blastbeats, all breakdowns, all the time” will probably be a bit disappointed – but for me this is one of the most intriguing and immersive Death Metal albums of the year so far, one which continues to reveal more and more depth and character the more I listen to it.

I have to say, this one was a big surprise to me (and to all of us here at NCS Incorporated).

Not because we’re unfamiliar with the band – far from it, as we’ve written about both their previous albums – but because we hadn’t heard anything from them in such a long time (not since the release of 2014’s Our Great Undoing, in fact) that we’d almost given up hope.

I was understandably shocked then (in a good way, I promise) to randomly stumble across the band’s new album last week, which not only showcases a slight shift in the group’s line-up but also a subtle – and important – redefinition of their core sound.

Whereas both Born of Hate and Our Great Undoing were bombastic Blackened Death Metal albums firmly in the Behemoth/Hate style, The Infernal Summoning is much more of a Black Metal album with some occasional deathly touches, and all the better for it.

Songs like the bone-rattling “Hellcaller” and the frenetic “Deity of Decay”, for example, err closer to the gnarly, nihilistic sound of post-Demonoir era 1349 – all twisted riffs, tangled melodies, and tortured vocals, coiled and contorted into unpredictable, yet strangely irresistible, shapes – while others, such as “Usurper” and the hellishly headbangable “Reach to the Hammer” add a hefty helping of grimy, Gorgoroth-esque groove to the mix.

However, there’s more to this album than just comparisons to other, more well-known bands (though there’s definitely some Tsjuder in there as well, if I’m not mistaken)… even if it’s hard to put into words.

It’s just a feeling, something instinctive – not quite physical, not quite spiritual – that I get every time I listen to the raging riff-storm of “Essence of the Black Heart” or the wild, whirling dervish that is “Sons of the Dead”, which lets me know that this record is the real deal, by a band who have clearly, finally, found their sound.

I suppose this is one of those rare occasions where you really can trust a book – or, in this case, an album – by its cover, because the artwork adorning The Infernal Summoning lets you know exactly what to expect… something dark, grim, and venomous… and unashamedly and unpretentiously Black Metal to the core.