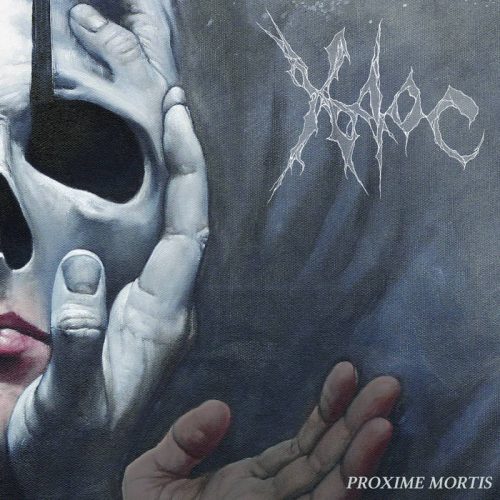 And if you like Death Metal (and I know you do) then you need to listen to this album.

With a history that extends back to 2006 and a line-up that features members of Construct of Lethe, Hideous Divinity, and Grethor, you might expect to be more familiar with the name Xaoc than you probably are, but since this is actually the band’s (long-delayed) debut album – one that’s been over a decade in the making, on and off – then there’s a good chance this will be your first exposure to their music.

I doubt that will matter very much for very long, however, because as soon as the opening barrage of explosive blastbeats and blazing riffs that is “Terror Forge” hits your ears you’re not going to be thinking about the band’s extensive and surprisingly complex back-story… in fact, you’re probably not going to be thinking about very much at all, since you’ll be too busy having your brains blown out of the back of your skull.

With a sound which does indeed combine elements of both Construct of Lethe (specifically the absolutely massive riffs and merciless metallic hooks of guitarist Tony Petrocelly) and Hideous Divinity (again, not a huge surprising considering the presence of HD drummer Giulio Galati – also of Nero Di Marte – behind the kit), as well as some splashes of chunky, churning, Suffocation-esque rhythmic violence (“I Am Flesh” being a prime example), Proxime Mortis is the perfect album for those people who like their Death Metal with everything turned up to at least eleven at all times.

That’s not to say it doesn’t have its own sense of dynamic – “Ars Goetia”, for example, manages to keep you on your toes by constantly switching up its method of attack, even as it maintains the intensity levels at maximum throughout – but it’s definitely more of a question of relativity and nuance than sheer diversity.

And that’s absolutely fine, because each and every one of these songs – up to and including closer “I, Pilate”, which is actually a cover of one of Petrocelly’s previous bands (see, I told you the group had a complicated history) – is a merciless metallic murder machine in its own right, and there’s a good chance that if you asked nine different people to choose their favourite track that you’d end up getting nine different answers (for what it’s worth, “Processions of Suffering” is currently the front-runner for me, though that could easily change tomorrow).

It’s also worth noting that this is one legitimately furious album, vocally as well as musically, as while a lot of Death Metal vocalists can come across as if they’re simply playing a character – trying to sound as “evil” and “brutal” as possible, without necessarily putting any real emotional weight behind it – that’s definitely not the case when it comes to Xaoc frontman Davis Mullen, whose performance on this album is both impressively powerful and incredibly pissed-off, to the point where he occasionally hits almost Joe McGlynn (Man Must Die) levels of raw, unadulterated rage.

So while the band may have taken a somewhat circuitous  to get here (hell, Petrocelly is the only one of the group’s original, pre-hiatus, members left) you can’t say that it wasn’t all worth it in the end, because this is a real dark horse contender for one of the best Death Metal albums of the year.