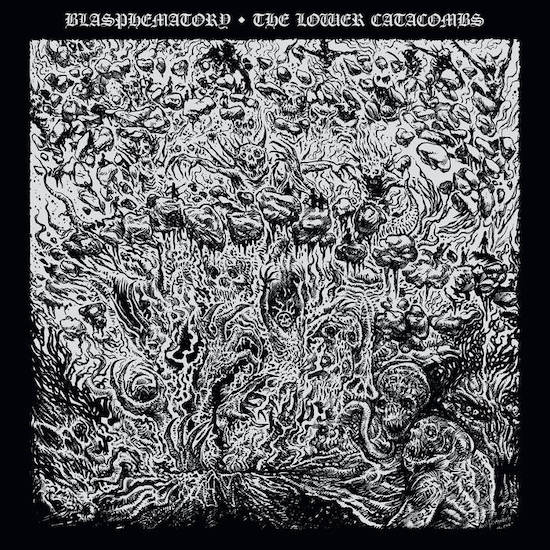 The New Jersey death metal band Blasphematory boasts a line-up that includes members of Abazagorath, Death Fortress, and Altar of Gore, and for anyone who knows the music of those bands there should be no further encouragement needed to check out Blasphematory‘s forthcoming second album, aptly titled The Lower Catacombs, even if you missed their first full-length (2019’s Depths of the Obscurity).

But perhaps all those names may have eluded some wanderers among the tombstones and sepulchral crypts of dank and devastating death metal or the freezing moons of black metal. Or maybe the music of Blasphematory alone has escaped the attention it deserves. Certainly, The Lower Catacombs deserves a lot of attention. It’s as macabre as the cover art, and turns out to be as addictive as it is filthy and ferocious.

As this song vividly displays, the band have dialed in some big contrasts in sound. The rhythm guitar generates a roiling and churning sensation that’s so dirty and diseased that you might feel you’ll never wash it off or succeed in disinfecting yourself. The double-kick bursts and crazed bass-rumbles sound like they’re coming from beneath huge piles of cemetery earth. And the guttural roars must have been recorded in a deep sewer pipe.

On the other end of the sonic spectrum are the high, sharp, tin-can clatter of the snare and the wailing whine of the lead guitar, which gives the music a decidedly supernatural dimension.

Those contrasts in sound are part of what makes the song so attention-seizing, but in addition to that the band include skull-busting grooves and a shift into a crawling tempo where the guitar melody becomes even more blood-congealing. Put it all together, and you get a song that’s a horrifying thriller, and one that’s also also damned infectious (in both senses of the word).

The line-up of Blasphematory now consists of Chris Warhead (drums), Joe Aversario (bass, guitar, vocals), and Tom Deceiver (second guitar). The Lower Catacombs is set for release on May 13th by Nuclear Winter Records, on CD and vinyl LP formats, and it’s up for pre-order now. Below, you”ll also find a stream of the previously released song “Cruciform Shadows“.