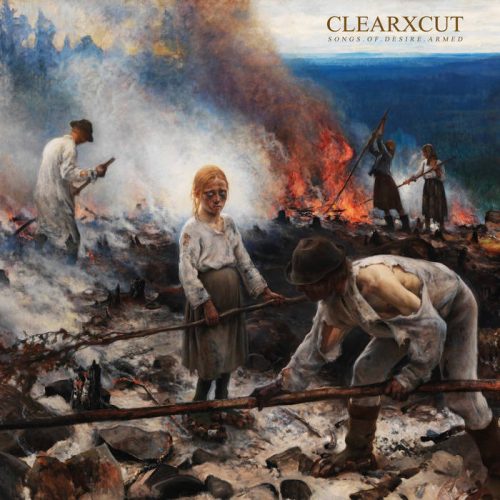 While my love of Hardcore has been well-documented by now, there are still certain things about it which don’t always sit right with me (and I don’t just mean karate-dancing in the pit, whose ignorant, “look at me”, attitude has always seemed antithetical to the communal mindset of the genre).

In particular, despite supposedly being founded on principles of brotherhood and community, a lot of Hardcore bands/fans can be rather elitist and exclusionary – especially when it comes to emphasising the “brother” part – and while there have been a lot of moves towards changing this in the years since I first got into the genre, there’s still a fair way to go until Hardcore as a whole will be able to truly say that it practices what it preaches.

There are, however, still a lot of bands who both talk the talk and walk the walk, and CLEARxCUT – a vegan, anarchist, anti-fascist and straight-edge Metallic Hardcore collective made up of, among others, both current and ex-members of Implore, King Apathy, and Heaven Shall Burn – are unequivocally one of those bands, expressing their beliefs and ideals not to exclude or impugn others but to engage and inspire by example.

It’s a hard line to walk, it’s true, but CLEARxCUT manage to maintain this balance – passionate, yes, but never preachy – throughout Songs of Desire Armed, whether they’re raging about the horrors of ecological collapse (“The Sky Ablaze”), mourning the terrible toll of addiction (“My Anchor”), or calling for the destruction of the modern-day class system (“The Seeds of Hope”).

Surprisingly, “hope” is perhaps the defining feature of this album, for while the band freely acknowledge that these are desperate times, and don’t shy away from the darkness inherent in the issues they’re confronting, they’re not ready to give up on fighting the good fight, and hope to inspire others to keep on fighting too.

Of course, while courage and conviction are great (and they definitely are… they’re what drew me to the genre in the first place, in fact) it helps if you’ve got the musical chops and the songwriting skills to back it up too, and CLEARxCUT thankfully aren’t at all shy when it comes to cranking out some seriously (and ironically) meaty metallic riffs nor are they afraid of adding a dash of melody here and there to really get your juices flowing, with the result being that Songs… is both a much heavier and much catchier album than its predecessor.

So if you’re the sort of person who doesn’t mind a bit of Metal in their Hardcore, or vice versa – perhaps a fan of acts like Earth Crisis, Shai Hulud, Fall of Efrafa, or any of the members’ previous bands – then you should definitely give this album, which we’re fortunate enough to be premiering here today in advance of its release next week, a listen. Because it’s as real, as raw, and as honest as it gets, and a reminder that in times like these we need to remember what really counts:

A moment of love, a friend, solidarity
Compassion, a spark of hope, some clarity
Something real, truth unharmed
Let’s sing together
These songs of desire armed

Check out more from CLEARxCUT and pre-order Songs of Desire Armed at the group’s Bandcamp page.

2 Responses to “AN NCS PREMIERE: CLEARxCUT – SONGS OF DESIRE ARMED”