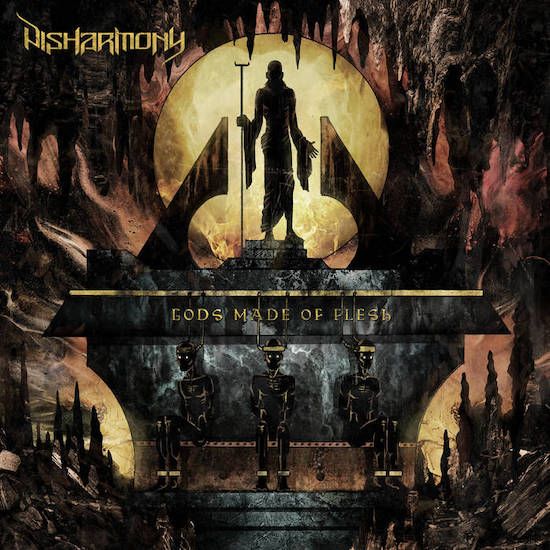 During 2017 and 2018 we devoted quite a lot of attention to The Abyss Noir, the second album by the Athenian metal band Disharmony, whose multifaceted musical textures have drawn comparisons to the sounds of Nevermore, Sanctuary, Judas Priest, Iced Earth, and Anthrax. Five years later, Disharmony are returning with their third full-length, Gods Made of Flesh, and it deserves a lot of attention to.

In its conceptual focus the music revolves around “the different kinds of Enslavery we all have to confront since the time we are born,” with each song reminding us of “the Divinity of our Spirit and the Chains it entails”. In the sounds themselves, Disharmony‘s influences and inspirations lead them into a captivating fusion of styles and sensations — which you’ll discover for yourselves through our premiere today of “The Cynic and the Beggar“. 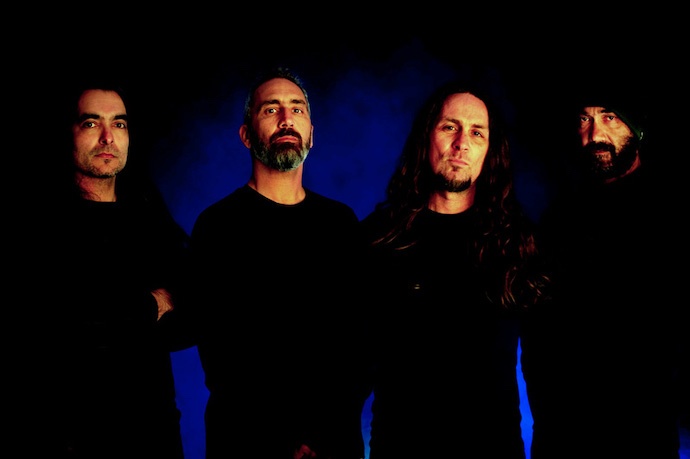 This new song packs a visceral punch — it jolts, slugs, and spits armor-piercing bullets — but its melodies and the clean-sung vocals soar. Harsh vocals become a menacing, snarling presence, but the guitar soloing swirls and flashes in displays of scintillating splendor. Harmonies abound, in both the vocals and the guitar melodies, and feelings of grim portent and blazing glory conjoin. Loosen your neck and press play below:

The album was engineered, mixed and mastered by Disharmony and Ioannis Karousiotis. The front cover/layout/booklet art was designed by Achilleas Gatsopoulos. It will be co-released by GrimmDistribution and More Hate Productions on April 26th.

Below you’ll find links to more release info, plus a stream of the previously released song “Under the Waves“, which reveals even more facets of Disharmony‘s songwriting and vocals, combining moods of gothic gloom, sublime melancholy, and sparkling mystery to create a dark, imposing, and powerfully evocative anthem. If you can imagine, it might seem like sitting alone on a hill above an ocean shore beneath a midnight blue sky, remembering lost happiness and watching phosphorescence in the waves.