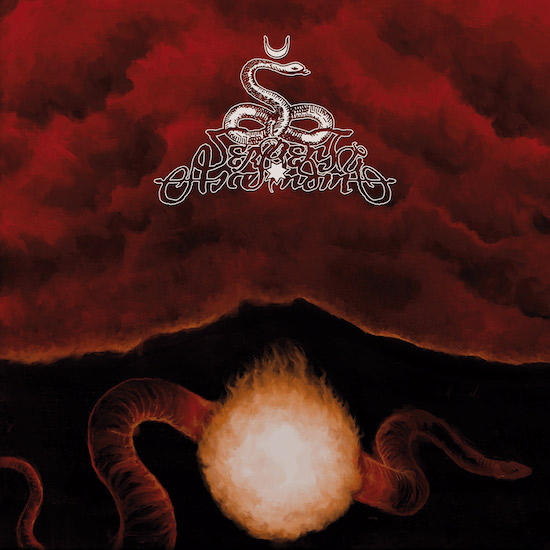 Serpent Ascending‘s new album Hyperborean Folklore is one in which a questing wanderer may travel far in the company of an unusually gifted guide and find wonders galore, both on the surface of the path and far below it.

The music is the work of a sole adventurer, the Finnish musician and vocalist Jarno Nurmi, who was once a member of Slugathor, Nerlich, and Desecresy. Because it is a solo work, the inspirations, the words, and the music are all inter-connected in ways that are rare for a full band, and here they all come together in truly extravagant and fascinating ways. 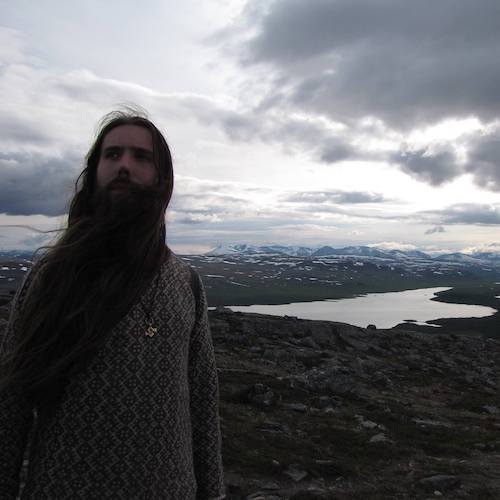 The words alone are worth careful attention. Of the four songs present on the album, all of which are above average length, the opener “Growth of the Soil” uses translated excerpts from a novel of the same name (Markens Grøde in Norwegian) by Knut Hamsun, the book that won him the Nobel Prize in Literature in 1920. Those excerpts are mysterious and heart-breaking; they revolve around the deaths of two babies, barely born. (I am grateful to Jarno for the discovery of this novel, among many other things about the album to be thankful for.)

The second song, which you’ll have a chance to hear today, is the title track, and its words are translated excerpts from the epic Kalevala (1849), poems XVII and IX, in which Väinämöinen finds the lost-word and Origin of Iron.

The words of the fourth song, “Skaði’s Longing for the Mountains – Njorðr’s Desire of the Sea“, are translated excerpts from Gylfaginning, the first part of the 13th-century Prose Edda after the Prologue.

Jarno Nurmi himself wrote the lyrics to the third song, “Stállus Hideout“, and there he proves himself to be not only a lover of poetry but also an adept poet himself, and very much in line with the sagas he draws from on the other tracks.

But of course you might like to know something about the music that accompanies these epic tales of gods and men.

To borrow from what we’ve already written about that opener, “Growth of the Soil“: It is a hell of a trip, just as riveting as the chosen words from Hamsun‘s great novel.

It opens with martial drum rhythms, blaring chords, and muttered words. The music creates a sense of electrifying defiance, and then begins to twist and turn, creating a rich embroidery of syncopated bass-and-drum interplay, masterfully mercurial guitar work that renders moods of ecstatic madness, morbid gloom, wistful introspection, frantic confusion, and occult peril (that’s how I translate what I hear, though you may take away different sensations).

Grim and solemn words and rabid snarls surface in the midst of the extravagant guitar performances, which draw upon lots of influences, including classic heavy metal and prog, black, and death metal, to create a ravishing spectacle of sound.

And then comes the title track and its lyrical excerpts from Kalevala. The raw tones of the guitar maneuver over the throb of the bass and drums in ways that are simultaneously melancholy and yearning, and altogether captivating. The layered riffing becomes more frenzied as Nurmi begins his solemn, near-sung recital, and also more magical as the notes ring, cavort, and flow.

The song has an immersive, dreamlike quality, but becomes turbulent as the drums hammer, the buss boils, the chords slash and scathe, and Nurmi‘s voice gnashes in a death growl. This upheaval heats the blood, and its intensity is a match for the intensity of the words, but it also expands into an elaborate, head-spinning display of prog-metal virtuosity, and its fieriness burns with enthralling brilliance.

You might be left gasping by this point after those first two tracks… and there are more gasps to come in the final two. But we’ll defer commentary about those to a later date. Enough to say now that along with the opening pair, they make Hyperborean Folklore a truly remarkable experience.

The album features an arresting cover painting by Tommi “Desecresy” Grönqvist. It will be released on June 17th in CD and digital editions, and it’s expected that a vinyl edition will be out by October 2022.