The Second Fovea is a band with its origins in India but with a current location in the San Francisco Bay Area. They’ve released two singles so far, 2021’s “Headshot” and the song “Manta” that came out just a couple months ago. We’ve written about both of them here, not only because the music grabbed us but also because of the songs’ conceptual themes.

“Headshot” was a condemnation of global hate crimes and racism, and “Manta“, as is obvious from the name, was “dedicated to appreciating the majestic manta rays and spreading awareness about their conservation”. Two very different subjects, but we can get behind both of them.

What we’re bringing you today, in an effort to shine a bigger spotlight on “Manta“, is a playthrough video for that song which features the performance of the band’s drummer, principal spokesman, and co-songwriter Priyam Srivastava. 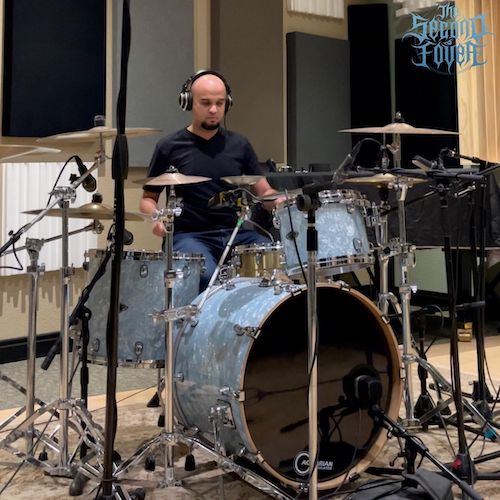 The song as a whole (which is wholly instrumental) is a great musical representation of the stunning creatures for whom the song is named. The music is mysterious, menacing, magical, and majestic, and manages to capture the feeling of becoming immersed in a vast sub-surface oceanic environment.

But The Second Fovea take a lot of influence from groove metal, and so in addition to being otherworldly the song also punches the listener’s pulse, sometimes feverishly, and Srivastava’s drumwork has a lot to do with that, ranging from measured cadences to battering ones, and playing a vital role in the song’s changing moods.

Below we’re also including another playthrough video for “Manta” that features the soloing of The Second Fovea‘s guitarist Naval Katoch, as well as the official visualizer video for the same song and the band’s lyric video for the “Headshot” single

P.S. If you’re curious (as I was) about where the band’s name came from and what it means, you’ll find the answer in this video. Hint: It uses the acute vision of eagles as a metaphor.