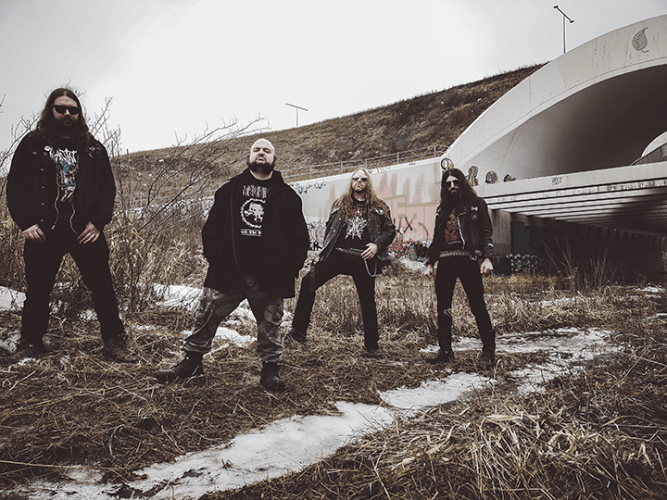 In the olden days I was able to put together a couple of new music roundups every work-week. Nowadays I’m usually able to do it only once, on Saturdays, when the NCS audience tends to dwindle. I do miss those old days, but to return to them, something else would have to give way, something related to what else I do for the site (e.g., all the daily premieres) or something related to the rest of my life (e.g., speaking to my wife).

As you can see, however, I did manage to find a small margin of time for a round-up today, so small that I nearly didn’t even bother. But the thought of shaving even three worthy songs off the gigantic list I’ll be staring at when contemplating tomorrow’s Saturday S&H seemed worthwhile. So here we go…. 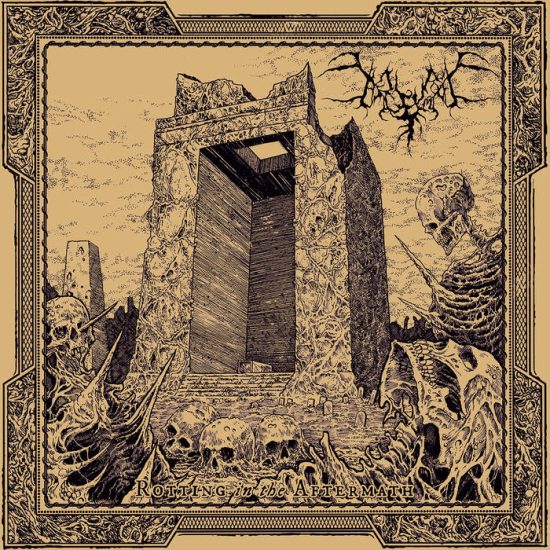 Prepare for a galloping and grinding dose of pulce-punching aural mutilation courtesy of these Canadian barbarians. Featuring a snare beat that snaps at your neck like a spring-loaded trap, guitars tuned to filthy, dismal tones, riffs that are as catchy as they are cruel and crazed, a bass that sounds like a subterranean upheaval, and a mad howler behind the mic, the song provides the equivalent of cutting open a live power line and jamming it in your neck.

The song is “Hell’s Embrace” (is it ever!). It includes guest vocals by by B. Symic. It’s off an album named Rotting in the Aftermath that will be released by Dark Descent on July 10th.

You’d best get ready to be stomped into the earth and have your innards rendered by a giant meat-grinding machine, while an acetylene torch is applied to your brain and a mad wolfman howls in your face, in the middle of a war zone. That’s one way of trying to sum up the massive and mauling impact of “Meurtrière“, the first advance track from a new album by Pilori. It comes with a video.

The album title is Quand Bien Même L’Enfer et le Déluge S’abattraient sur Nous, which I assume means “all hope for the future is lost so we’re going to end your agony right now”. I don’t speak French, it’s just a guess. The album is apparently being released today by Terrain Vague and a bunch of other labels.

This next song, “A Man Alone (In A One Man Poem)“, made me think of a Blade Runner future, and many other futures besides. It’s a colossal extravaganza made of many moving parts, including heaps of swirling and pulsating electronics across a broad tonal range, absolutely riveting drumwork, the dancing and swirling tones of a violin, half-spoken, half-sung vocals (by G.W.Sok, formerly The Ex) with a sultry and jazzy style that sound like they were lifted from an alternate history of 1920s Harlem, and lots, lots more.

There’s a ton more info about the band, their guests, and all the songs on the album (entitled WHAT ON EARTH (Que Diable)) at the Bandcamp page linked below, and all of it makes me hungry to hear more. It has a release date in the far future of October 28, 2022.

(Thanks once again to Miloš for linking me to this.)