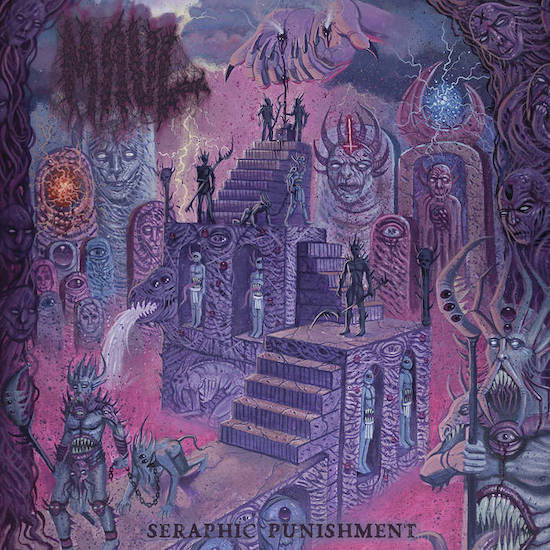 When you begin to hear the music on Maul‘s forthcoming debut album Seraphic Punishment, you’ll realize just how perfect Jason Barnett‘s cover painting really is. The imagery is a macabre bestiary, horrifically detailed and hideous in its manifold visions, and yet crafted with pastel rather than hellish colors to portray its paranormal panorama.

Like that artwork, Maul‘s album is also ghastly, a Pandora’s box of death metal horrors that take various blood-congealing shapes. But it’s also a bone-smasher, and fiendishly infectious, and the songwriting is so dynamically good that it causes the album to stand out, just like the artwork’s color scheme.

Like the name of the song we’re premiering today — “Repulsive Intruder” — Maul present themselves as repulsive intruders, but you can’t help but invite them to stay. They might ruin your home, but you’ll have a fucking great time watching them do it. 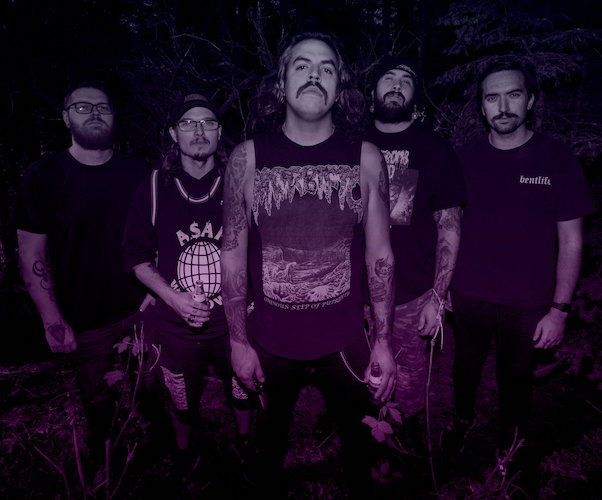 Maul hail from the unlikely city of Fargo, North Dakota (unlikely, that is, unless you remember the blood-spraying wood-chipper near the end of the Coen brothers’ movie). They’re not exactly an undiscovered gem, because they’ve churned out a torrent of short releases (and a live album) over the last three-plus years that have drawn a devoted following. Still, this first full-length is likely to attract a lot more fans, and you’ll understand that prediction when you hear the song we’re premiering.

Maul explain that “’REPULSIVE INTRUDER‘ is inspired by soul sucking people in your life that seemingly crawl out from the lowest place possible solely to attach and destroy others in order to feel anything for themselves.”

As the song begins, Maul waste no time, but begin to pulverize the senses immediately — with searing, seething, and screaming guitars, drums that go off like gunshots, and a spleen-rupturing low-end punch. The song’s massive lumbering momentum is monstrous, and then becomes a jittery and jabbering lurch that works the neck at the same time as it channels a kind of sadistic, fiendish delight — and that feeling of crazed ecstasy only grows when the drums begin to batter at a feverish pace.

The music’s hideous marvels include a choir of abyssal roars, gagging snarls, and barking screams, freakishly swirling lead guitars, thuggish sledgehammer grooves, and a skin-crawling closing segment made of unearthly ambient sensations. The track also manages to worm under the skin, because it’s so diabolically catchy.

But please, don’t stop there. Move right on into the album’s bludgeoning and mind-mauling title track, which is further proof of Maul‘s impressive songcraft. It manages to be a display of frightening eminence, malignant savagery, unchained delirium, and muscle-convulsing rhythms.

Seraphic Punishment was tracked and engineered by Jake Watson of Earl Studios, and it was mixed and mastered in Denmark by Andreas Linnemann (Baeast, Angerot, Mutilatred).

The album will be released on July 15th by Redefining Darkness Records on 12″ vinyl, CD, and digital formats, and Gurgling Gore will be handling the cassette release. Pre-orders for all those editions are available now through the links below.

And in other Maul-ing news, the band have recently announced the Seraphic Punishment Tour in support of the album release, which will extend from mid-July to early August with support from Redefining Darkness family, Tombstoner, and Jesus Wept on select dates. Maul will also be playing the INTO THE DARKNESS FEST on July 30th in Youngstown, Ohio, alongside Deceased, Imperial Triumphant, and Horrendous, to name a few. For more info about all that, visit Maul’s FB page. 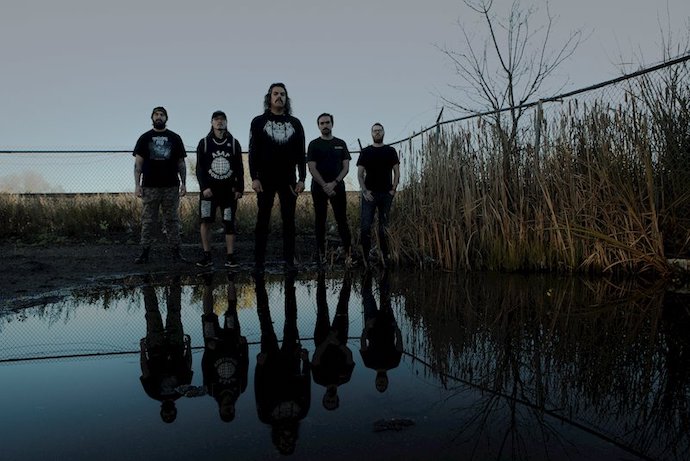