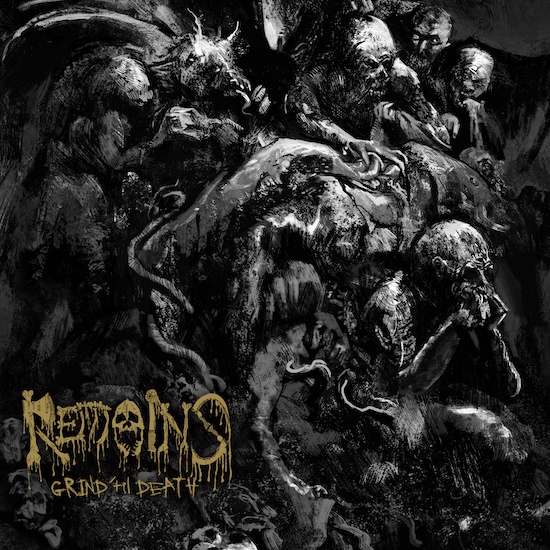 You are about to experience the third and final video for the third and final single off Grind ‘Til Death, the debut album by the Melbourne-based death/grind powerhouse Remains, which will be released worldwide via Spikerot Records and in Australia via Disdain Records on July 15th.

This one is named “Lords of Grind“, and as you’ll see in the lyric video, the song is about Remains themselves and the punishment their music inflicts on listeners and club-goers. Now if you’re going to brazenly anoint yourselves “Lords of Grind“, you’d better be able to back it up — and man, do Remains back it up! 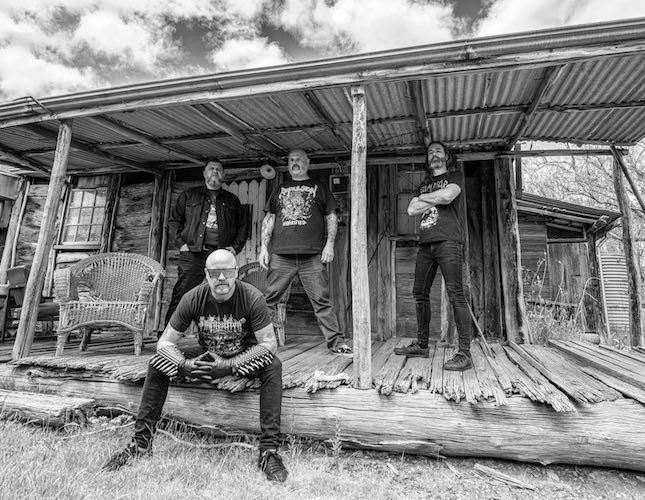 True to the track’s name, the song itself has a brazenly imperious quality. It may seem odd to use a word like “majestic” for a savage death/grind assault, but the soaring melodic riffs and even the viciously jabbing and jolting parts of the song bring that word to mind.

But to be clear, the song really is a savage piece of business too. The drums blast and batter at a maniacal pace. Swirling arpeggios generate a feeling of lethal menace, and the vocals are utterly ferocious, ranging from malignant howls and rising to incinerating screams as they expel the song’s name (feel free to pump your fists and scream right along with them). And the jackhammering grooves in the song really will beat you senseless.

The song as a whole has a livid throbbing pulse likely to trigger muscle convulsions, which is in keeping with its tremendous feral energy and crushing impact. Get ready for your heart to race, and press play below:

Even though Grind ‘Til Death is a debut album, it’s not a huge surprise that Remains are so good at blowing the top of your head clean off: This is an experienced band whose line-up features members of such groups as Blood Duster, Captain Cleanoff, The Kill, Fuck I’m Dead, King, and The Day Everything Became Nothing.

About the song we’re premiering today, frontman Tonebone has given us this comment:

“For this single aptly named ‘Lords Of Grind‘ we have chosen to go with a lyric video created by the legends at Underroom Studios. The story about this doozy of a song explains how each member of REMAINS will kill you all at a show pretty much (with the killer tune that is!!!). Fierce riffs and strict blastbeats is what you’ll find here. We couldn’t be happier to release this one as our last single before the album release in July, it’s definitely a taste of what’s to come.”

For further tastes of what’s coming, be sure to check out the previously released videos for the album tracks “Bloodthirst” and “Remains“, which you’ll find below. 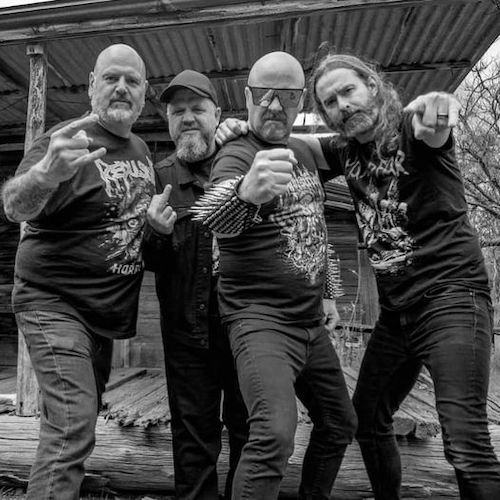 Grind ‘Til Death was mixed and mastered by Joe Haley (Psycroptic) and it features cover art by one of our favorite artists, Mitchell Nolte. It includes 18 furious tracks that blast through the cranium in a total of about 35 minutes.

Spikerot and Disdain will release it in LP vinyl, digipak CD, and digital formats, and merch options are available too. Explore all the offerings via the links below.