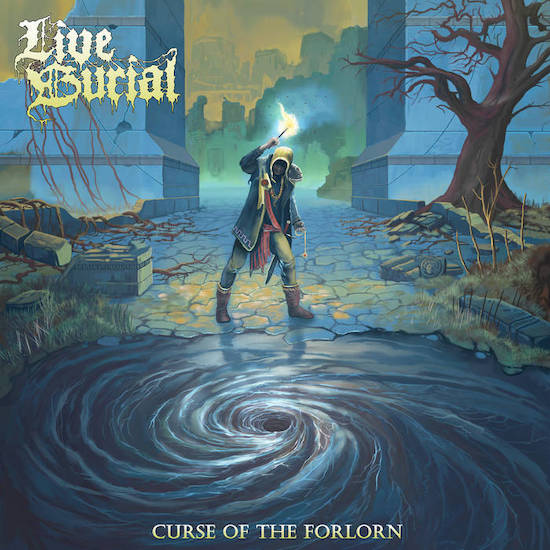 Two years have passed since the release of Live Burial’s striking second album, Unending Futility, and now these British ghouls have crawled from their crypt again, bearing a third album in their monstrous claws. As with the second album, the new one will be released by Transcending Obscurity Records, and it is again embellished with the cover artwork of Luke Oram. In February 2020 we premiered a song from the second album, and now we’re doing it again for the third one.

The name of the new full-length is Curse of the Forlorn, a title that suits the music, which carries forward the band’s doom influences, and does indeed sound cursed. Death metal through and through, these songs slug with gruesome, bone-shaking force, create horrifying supernatural nightmares, and explode in convulsions of maniacal fretwork and frenzied percussion.

The music is capable of both suffocating hope and supercharging the senses with high-voltage energy. It’s muscular enough to pack a wallop and creepy enough that its horrors shiver the spine, and the embroidery of the guitar-work has become even more technically accomplished and elaborate than before, adding to the music’s dynamism. We have a great example of all these qualities in the song we’re presenting today — “Blood and Copper“. 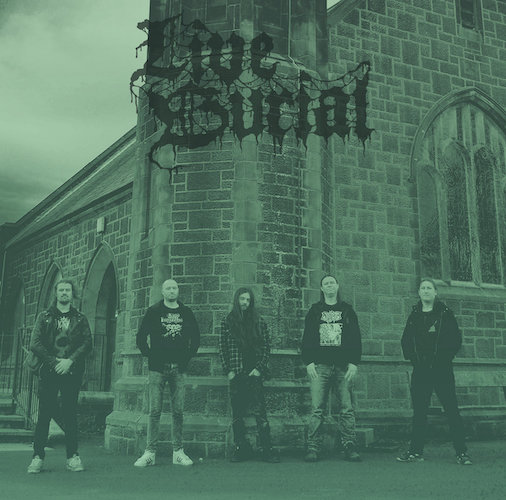 This new song’s opening lead-guitar harmony wails in piercing tones, radiating misery and gloom. The volume and power of the music swell and become more frantic — the drums pound and rattle, the chords groan and jolt, the lead guitar spirals upward in a fearful fever, and a frightening voice howls, echoing as if violently expelling the lyrics from catacomb depths.

The music’s intensity reaches a convulsive zenith, the drums furiously battering and snapping, the guitars writhing and roiling, the voice screaming in madness, and a guitar solo creates a fret-melting spasm of electrifying derangement. Near the end, the music transforms into a lurching and hammering stomp, drawing out the music’s’s doom ingredients, but still eerily quivering like an expression of wraith-like lunacy.

As usual, Transcending Obscurity is releasing the album in a multitude of formats, accompanied by an extravagant range of clothing, and you can inspect all the options through the pre-order links below.

The album will hit the streets on September 23rd, and the label recommends it for fans of Asphyx, Unleashed, early Atrocity, Morgoth, early Vermin, Skeletal Remains, Thorn, and Heads For The Dead.

Finally, we’ve included streams of two other previously released tracks, “My Head As Tribute” and “Exhumation and Execution“, both of which are well worth your time.

3 Responses to “AN NCS PREMIERE: LIVE BURIAL — “BLOOD AND COPPER””