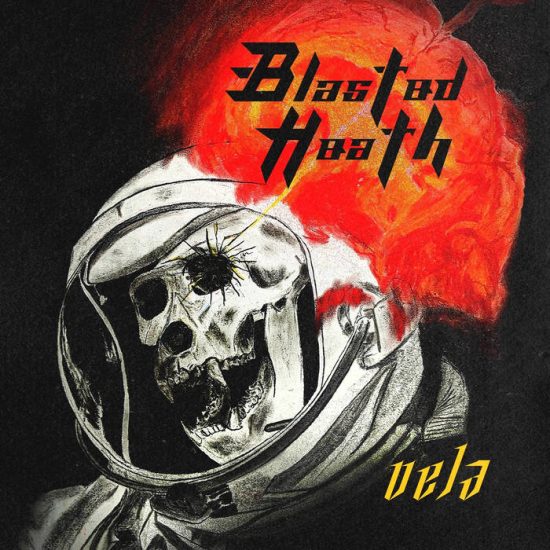 “Vela is a blast of blackened chaos from distant galaxies, mastered by death metal legend Dan Swanö (Edge of Sanity, Bloodbath). Imagine early Bathory mixed with Darkthrone’s grim eclecticism and Black Breath‘s punk grime. Mutate that sound with Lovecraftian psychedelia and you get this unforgettable album.”

That’s the PR come-on from Wise Blood Records for the debut album by Blasted Heath from Indianapolis. I thought, if that’s even pretty close to accurate I’m going to be very happy with this one. The preview checks a lot of the right boxes for my tastes. Another one got checked when I read guitarist/vocalist Kyle Shumaker‘s comments about the last three conceptually linked songs on Vela, which are about neutron stars (aka pulsars) and “Killanova” events in which two such stars in a binary system collide and potentially release “strange matter”.

And then there’s the fact that the band named the album itself for a pulsar that’s the remnant of a supernova that occurred 11,000–12,300 years ago, and the brightest pulsar (at radio frequencies) in the sky.

So, lots of reasons to be intrigued and attracted before hearing a single note. But, as always, it comes down to the payoff: Do these black/thrash cosmonauts deliver what’s promised? You’re about to find out.

Like eager spacefarers awaiting liftoff (and punishing acceleration), you’d best strap yourselves in before partaking in our full streaming premiere of this album. Weird and frightening frequencies assault the senses at the very outset, and then a hurtling barrage begins, which subjects both mind and body to destabilizing yet wondrous attacks.

That album opener, “Big Chill”, hammers and rumbles at high speed, while simultaneously spearing and searing the brain with blazing and raking riffage, a freakishly swirling solo, and wild screams and snarls that seem to radiate and reverberate from some hideous other-dimension.

“Big Chill” is a raw and raucous introduction to the album, feral in its rhythms and abrasive in its distortion, but also quite effective in positioning the music somewhere far off our planet’s surface and simultaneously creating a mood of madness. Those qualities re-surface throughout the record, but Vela also creates mind-bending diversions that spawn different kinds of mind’s-eye images — of horrific void-dwelling creatures, bizarre radio transmissions from galactic objects, and supernova apocalypse.

It’s a fascinating and frequently unnerving amalgam that unfolds across the album, one that includes cavorting punk beats, mid-paced rumbling maneuvers, black-hole collapses, and full-bore outbursts, as well as brazen chords, hallucinatory guitar leads, and a rich array of shrill skittering and swirling tonalities that justify the band’s pulsar imagery — and amplify the feelings of frightening lunacy and cosmic horror that pervade these songs.

There are also moments of vast but unsettling splendor (“Dark Energy” and “Neutron Star” are prime examples), and the band’s instrumental adventurousness is always impressive, as all the performers create one head-spinning interplay after another.

The frightening nature of the vocals also can’t be overstated. They echo relentlessly, but relentlessly shape-shift as well, fashioning a tapestry of derangement. 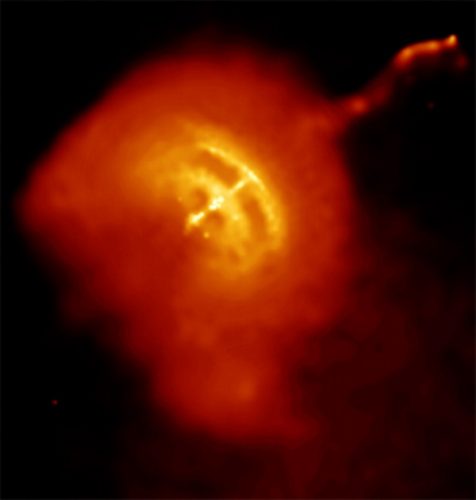 The Vela pulsar and its surrounding pulsar wind nebula

The final trio of thematically connected songs mentioned above create the most remarkable trip of them all, and we’ll include Kyle Shumaker‘s commentary about them below. Suffice to say here that the interweaving of styles and sonic textures — which include the sound of the radio signal emanating from the actual Vela pulsar, samples from an old radio serial called “Lights Out”, some surf-rock guitar, beautifully seductive melodies, cosmic soloing, and scorching, brain-mangling spasms — is truly head-spinning.

It’s one thing to marvel at the beauty of galaxies unimaginably distant from us in both space and time, captured in still images. It’s another thing to contemplate the vastness of those objects and how extremely inhospitable the intervening void is to life, or at least our kind of life. Those thoughts can open the door to existential dread and even terror. Blasted Heath channel that, while also finding ways to get listeners’ heads pumping and hearts pounding.

In a nutshell, Vela really doesn’t sound like anything else out there. The references to early Bathory, Darkthrone, and Black Breath aren’t out of place, but it must be emphasized that Blasted Heath have processed their influences through wormholes, and what comes out the other side is exotically wild. The result is one of the most fierce, fearsome, and fascinating albums of the year. See for yourselves:

Now, as promised, here are vocalist/guitarist Kyle Shumaker‘s detailed comments about that final trio of tracks:

The opening [of “Neutron Star”] is the sound of the radio signal emanating from the actual Vela pulsar. Pulsar is just another term for a Neutron Star. The lyrics describe the characteristics of a Neutron Star, the most dense object in the universe, with strange characteristics that make it one of the most extreme objects in the universe besides a black hole. This culminates in a “Killanova” which is what happens when a binary system with two neutron stars has a collision, creating one of the biggest possible space explosions followed by both bodies collapsing into a black hole.

“The Wind in Vela” is a reference to a pulsar wind nebula, which is what the Vela Pulsar is. It’s basically an instrumental, kind of inspired by the old Metallica albums which would include these epic instrumental songs like “The Call of Ktulu” or “Orion.” Except that we used samples from an old radio serial called “Lights Out” from the episode “The Meteor Man” to tie it in with the sci-fi themes. Another sample from the Meteor Man appears on “Ape.”

“Strange Matter”: Strange or exotic matter is theorized to exist in the extreme conditions inside a Neutron Star, and can only be released in a Killanova explosion. It has been theorized that strange matter is matter in its most “perfect” state, and that any other matter it comes into contact with will also be transformed into “strange matter” in this way it is theorized that Strange Matter could destroy the entire universe! In this I sort of used Strange Matter as a metaphor for a virus being released, with some allusions to ethnic cleansing policies being an example of humanity destroying itself in pursuit of “perfection” that in practice results in pure destruction and death.”