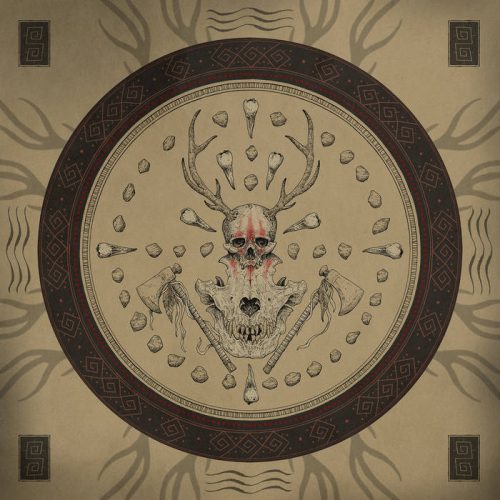 (The highly-anticipated debut album from Native American Black Metal artist Blackbraid is set for release this Friday, and our very own Andy Synn has some deep thoughts to share about it)

Hype… whether it’s the organic, grass-roots, free-range variety, or the artificial, astro-turfed, paid-for by your parents, kind… is a major part of today’s media landscape, whether we like it or not.

It’s not always a bad thing, by any means, but it sometimes becomes a bit of a self-fulfilling prophecy where, once a narrative about a band is established by an author or an outlet (or, increasingly, someone with sufficient twitter influence), that becomes the only story that gets any traction.

Case in point, Blackbraid I is not – as some have claimed, and even more have amplified – the “best Black Metal album of the year”, but it is a very good, occasionally unabashedly great, example of how Black Metal can serve as the perfect medium for anyone with a strong enough vision to express themselves.

What’s particularly interesting – from my perspective, at least – is that while this album is clearly one with a strong voice and vision, it also doesn’t play up to being a cliched caricature of what “Indigenous” Black Metal could/should be.

Let’s face it, a lot of the bigger and more well-known bands who incorporate elements of their history and culture tend to… play to the cheap seats, shall we say? And there’s a certain tension, maybe you’ve noticed it yourselves, between expecting bands to be “culturally authentic” and insisting that they engage in some sort of elaborate metallic minstrel show.

Blackbraid, however, very consciously doesn’t do that – while there are subtle musical elements which clearly pay tribute to the artist’s roots (most notably during the album’s sombre acoustic instrumentals, “As the Creek Flows Softly By” and “Warm Wind Whispering Softly Through Hemlock at Dust”, as well as the more aggressive “Sacandaga”) it’s primarily the powerful, evocative lyrics (which I strongly recommend you take time to read) which speak (no pun intended) towards the record’s native heritage.

By contrast, on a purely musical level, songs like dynamic, electrifying opener “The River of Time Flows Through Me” and the even more propulsive “Barefoot Ghost Dance on Bloodstained Soul”, quickly establish themselves as part of a blackened lineage descended from both the mournful melodic grandeur of Agalloch and the heart-racing, guitar-driven intensity of Necrophobic in equal measure.

It’s a heady brew, that’s for certain, one which moves seamlessly from seething rage to swaggering groove, all laced with gleaming threads of melancholy melody and mournful atmosphere, but one which never loses its sense of direction or identity – rather, each element builds upon and enhances all the others, such that the final product is, pardon me for saying so, more than just the sum of its parts.

This is particularly apparent on epic closer “Prying Open the Jaws of Eternity”, the album’s longest and most intricately arranged track, which takes full advantage of its ten-minute run-time to craft a rich and potent slow-burner of doomy darkness, blistering blackened fury, and razor-sharp melodic hooks, which successfully ties the whole album together in one final burst of cathartic creativity.

Look, I know I said earlier that Blackbraid I may not be the “best” Black Metal album of 2022… but it’s certain to rank very highly come the end of the year, there’s no question of that, and there’s a damn good chance that we’re going to one day look back on this record as the dawning of a vital new voice in the scene.