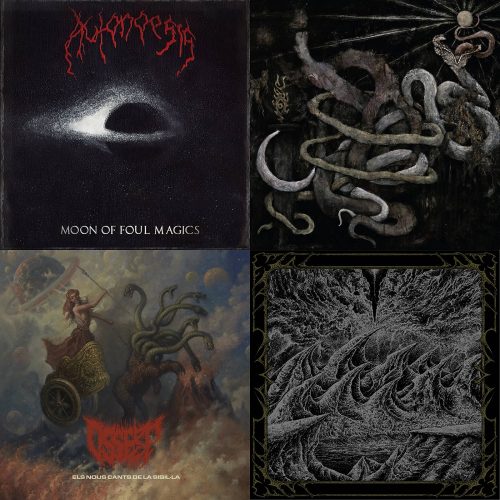 (What albums did you miss last month? Andy Synn is here to tell you about a few of them)

August was… a pretty shitty month for me, all in all. For a variety of different reasons.

That’s probably why today’s edition of Things You May Have Missed is such a dark one – sometimes you just need a dose of darkness to help put things in perspective.

As much as I’m loathe to trust the hype machine… sometimes it’s right on the money.

Case in point, the new album from Canadian Black/Death/Thrash hybrids Autonoesis is an absolute riff-monster that I can confidently predict will be appearing on more than a few Album of the Year lists come December.

Look, it’s not easy kicking your album into gear with one of the longest tracks on the record (as a certain much more mainstream, and far more overhyped, album tried to do just last month) and still have it hit the mark. The riffs, the writing, the overall dynamic, all have to be totally on point or you’re going to lose your audience before you even start.

But that’s exactly what Autonoesis have done here, with the nine minute title track taking you on a helter-skelter thrill-ride of razor-sharp, technically-talented, thrash-edged guitar work, searing melodic tremolo refrains, choppy, rhythmic riffage, and sinister snarling vocals – occasionally reminiscent of early Necrophobic, and all within the first four minutes – only to then switch tactics to introduce a gorgeously proggy instrumental mid-section (which moves seamlessly from moody introspection to shameless, soaring excess) before dropping back into a climactic Black/Thrash gallop that brings the whole thing to a thunderous close.

It’s one hell of an opening statement, there’s no doubt about that, but you might be concerned that the band have set the bar a little too high, a little too early, for their own good. Don’t worry, though, as the tracks which follow – the short, savage, and unflinchingly heavy “Raise the Dead”, the dynamically doomy, ferociously frantic “Crypt of Thought”, the undeniably epic “On Black Wings of Eternity”, to name but a few – all show the same level of care and attention, not to mention lethally precise execution, across the board.

Concluding with the unparalleled, unpredictable, eleven-and-a-half minute extravaganza that is “Descending the Void”, this is one album that richly deserves all the hype it’s been getting (and more).

If it’s been a rough couple of months for me, then it must have been a really rough few years for Hierophant, as the band’s long-gestating new album (their first since 2016’s Mass Graves, and their first new music of any kind since 2018’s Spawned Abortions EP) finds them making an unexpected heel-turn away from the crusty, sludgy, Blackened Hardcore sound of their previous records to instead become a full-blown Black Metal band (albeit, one with a distinctly deathly tinge) in the vein of Death Fortress, Rites of Thy Degringolade, Panzerfaust.

In particular, I’d say fans of the latter band who found the group’s latest album to be a tad too doomy and atmospheric for their tastes will find a lot to love here instead, as the apocalyptic intensity and domineering vocals of songs like “Seeds of Vengeance”, “Bloodbath Compendium” (which isn’t afraid of a bit of evil melody and oppressive atmosphere either), and the absolutely humongous title-track bear more than a passing resemblance to some of their Canadian cousins’ earlier works.

And while some fans of Hierophant‘s own previous work will likely be a little disappointed by the band’s transformation (truth be told, there’s very little of their earlier sound here – a dash of grim, almost grind-y energy in “Devil Incarnate”, perhaps, and maybe a touch of grimy groove in “In Chaos, In Death”) there’s no denying that this new, more blackened version of the band are still very, very good at what they do.

As a result I’d say this is the perfect jumping on point for potential new fans since – if the oppressive atmospherics and visceral sonic violence of closer “Nemesis of Thy Mortals” are anything to go by – Death Siege looks, and sounds, to me, like the beginning of a whole new era for the band.

Sometimes, for whatever reason, an album can hit at just the right time, in just the right way, to make a bit of a splash without needing to go through all the usual channels or play the media hype game.

Such has been the case with the latest album from Spanish Death/Grind berserkers Ósserp, which somehow found its way into my regular listening rotation – as well as that of several other people I know, both here in the UK and further afield – without there seeming to be much hype or fanfare about it.

Reminiscent of both the bull-headed brutality of Nails and the filthy fury of Of Feather and Bone – while also bearing more than a few sonic similarities to early Misery Index – killer cuts like OTT opener “Cavalcant l’ossa menor”, the blast-driven, hook-ridden “L’home en el laberint”, and the bulldozing “La rèmora” deliver one eye-popping blast of extremity after another, powered and propelled by the sort of unadulterated aggression you only get from bands who really mean it.

But if you’re worried that Ósserp might be a little too Grind-y for your tastes, then let me reassure you that the band’s Death Metal DNA is as impeccable, and unquestionable, as their ‘core credentials, particularly during tracks such as “Tot crema” and the absolutely frantic “L’abraçada del destí” which comes across like a more souped-up and sinister version of Cannibal Corpse… on steroids. And bath salts.

It’s not all just straightforward ferocity though – not only do certain songs (“El pes del buit”, “El rival més fort”) pull back from the brink and drop into a moody, Morbid Angel-esque crawl, but the band also display an unexpectedly eloquent grasp of dark, borderline “blackened”, melody at key points (most notably during the climactic, Sulphur Aeon-esque “Lluna Negra”), proving that there’s a malevolent method behind the madness.

Trust me folks, being (consensually) bludgeoned like this has never felt so good, and once you’ve had a taste of it you’ll be coming back for more in no time!

There’s been some confusion surrounding this album recently, as it seems a lot of places still have it listed as being released next week.

So allow me to clear things up – yes, it’s already out (it was released on the 26th, to be exact) and, yes, it’s a wonderfully nasty piece of work, in the best possible way.

Kicking in (and kicking your teeth in) with the gargantuan riffs, galloping rhythms, and grim melodies of “De Guerre Lasse”, Quand bien même l’enfer et le déluge s’abattraient sur nous quickly establishes itself as an album not to be fucked with.

Mixing, melding, and macerating Blackened Hardcore and Crusty Death Metal into one abrasive amalgam that lands somewhere between Ancst and Autopsy, Iskra and Grave, these ten tracks definitely aren’t afraid of going for the throat – especially during shorter, extra-savage numbers like “Meurtrière”, the scorching, sub-one-minute “Maelström”, and the unflinchingly violent “Au Prix de Tous les Sacrifices” – but also aren’t scared to ease off the accelerator and introduce a little bit of mood, a little melody, and a little atmosphere when necessary.

As a result of this songs such as the bleak, bellicose “Entre Chien et Loup”, the fiercely foreboding (semi) title track, and the chillingly blackened “En Haut des Cimes” possess a certain dark character and devilish charisma that adds an extra frisson of intrigue to the band’s blasting and grooving, raging and brooding, sound.

Culminating with the unexpectedly grandiose Post-/Sludge strains of “…et le Déluge”, this is one album which has a lot to say, and isn’t afraid to use its own voice to do so.