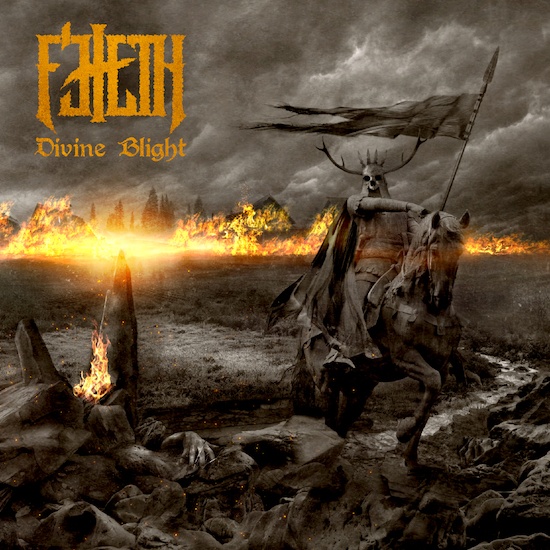 Today the Norwegian band Féleth are releasing the second single from their new album Divine Blight, which will be released by Rob Mules Records on November 11th, and we’re presenting a first listen here to help spread the word.

Today’s new song is named “Avarice“, and it’s the track that closes the album. It was preceded by the debut of the album opener, “Majesty“, and thematically the two are connected. As the band explain, “‘Majesty‘ describes the rise of a diabolical king-like entity who corrupts, oppresses and kills everyone. The ‘king’-persona is basically humankind fucking itself up”.

When the album reaches its end after many musical twists and turns, “Avarice” returns to that king-like figure from “Majesty“, “declaring war on everything and itself”. As the band explain, “The hook is written in the first person from the view of the general greed and hate that lies in the hearts of men. But grimmer.” 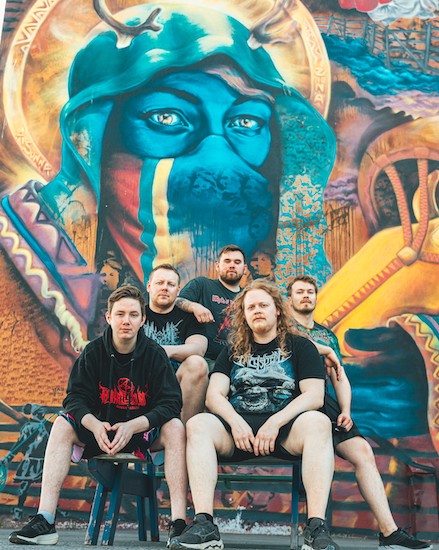 It’s probably best for you to take in “Majesty” first, as the band intended in their ordering of the album tracks. It was first presented by a video that shows the band throwing themselves into the song in a pyrotechnic setting. And what the song itself displays is an amalgam of jet-fueled instrumental pyrotechnics and scorching vocal intensity that soars to zeniths of dark, sweeping grandeur.

But Féleth also bring in episodes of gut-punching and skull-slugging thuggery, as well as a pair of soloing spectacles that make a terrifically exhilarating song even more electrifying.

“Majesty” is an exciting introduction to the differing styles and techniques that Féleth intertwine in their songwriting, drawing together ingredients from technical and melodic death metal in a white-hot rush that nevertheless is home to some bone-smashing grooves.

“Avarice” puts those genre ingredients on display again, but expands the musical palette and makes the song an even ore multi-faceted and atmospheric experience.

With no room to gasp a breath, the song explodes in a flurry of fleet-fingered, fret-leaping guitar work, neck-cracking drumming, and flame-throwing vocal intensity. But groaning chords and shrill, eerie melodic overtones also create dark and deleterious moods, building tension and fear.

While the vocals are utterly unhinged in their madness (and doubled in the chorus for extra intensity), squirming guitar arpeggios create a different dimension of insanity, coupled with agony, and martial drum patterns and a misery-steeped closing solo add to the song’s relentless dynamism. On top of all that, the song also punches like a heavyweight fighter.

The band say this about the construction of “Avarice“:

“The one song we actually wrote by just jamming, which one can easily hear in certain parts where the instruments are chaotic, yet totally in line with each other. A somewhat basic song structure, but with highly aggressive riffs and big atmospheric leads. At the end, we transposed the chorus down half a step turning the song into borderline black metal out of nowhere. Started off as a joke, but it worked. The huge twin solo at the end was orchestrated by Alexander”.

And so now you’ve got the album’s bookends. What comes between them is yet to be revealed, though rumors have it there will be at least one more single before the record’s release.

The evil king-like figure which appears in both these songs, representing the darkness of mankind, is depicted on the album cover which is made by the talented Eric at Kahinnien Graphix.

Divine Blight was mastered by Christian Donaldson (of Cryptopsy fame), and the visualizer video is the work of Liam Knott. The album comes recommended for fans of Shadow of Intent, Archspire, Fit For An Autopsy, Inferi, and Soreption.