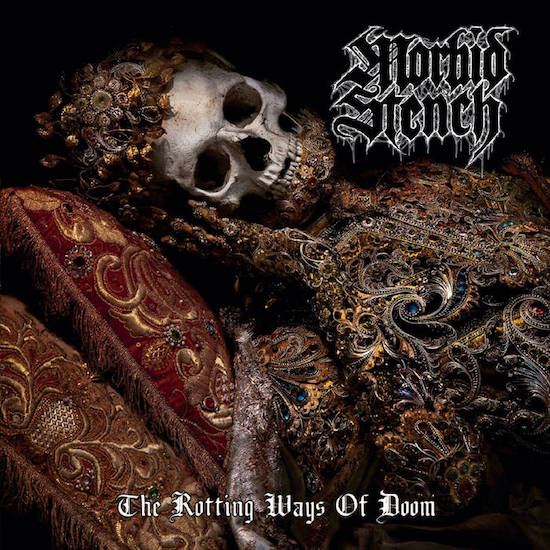 The process of rot after death may seem like a slow and stultifying process, but in fact there is a feverish busyness beneath the surface. Decomposition begins immediately, as a multitude of a body’s organisms join forces to create putrefaction, releasing compounds such as cadaverine and putrescine, which produce the unmistakably putrid odor of decay. Where possible, they are aided by worms and other external creatures satiating their own hunger from the stinking flesh.

No, this isn’t a science class today, but merely some morbid meditations spawned by the Central American necrotic doom-death band Morbid Stench and their new album The Rotting Ways of Doom. And it’s not just the name of the band and the title of their new album that prompt such thoughts, but also the music itself — and we have a prime example of that in our premiere of a track off the new album named “Macabre Introspection“. 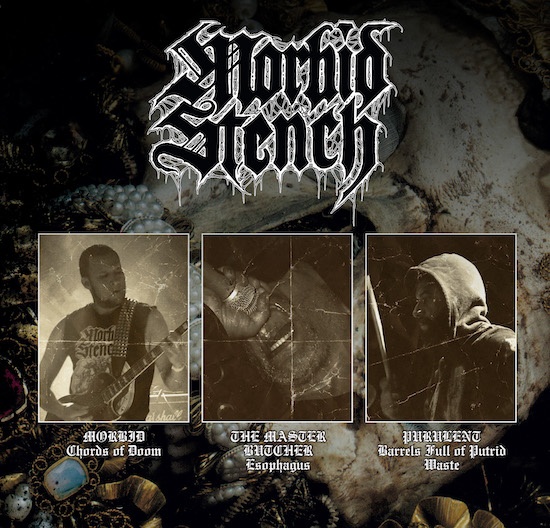 Without doubt, this is a moody, morbid, and horror-drenched piece of music, made even more frightening (and supernatural) by the imagery in the video. And it does have a foul aroma. But the song is also a dynamic and multi-faceted one, and proves itself to be a heavy bone-breaker as well as a manifestation of illness, agony, and despair.

At first this musical beast moves in a lurching stomp, swathed in groaning, whining, and squirming riffage tuned in the scale of disease. But as forecast, the riffing also hammers the listener’s neck as the rhythm moves in an even less predictable cadence, accompanied by ghastly growls and howls, and the song also oozes sounds of suppuration.

Slowing the pace even more, the band bring down the heavy doom, with skull-busting drum blows, dragging chords that reek of oppression and misery, and quivering fretwork that conjures images of feeding maggots. A ringing guitar underscores the mood of desperation, and another moans its suffering, but the band also take one final opportunity to jackhammer your neck before ending things with a haunting, chime-like arpeggio.

This new album builds on an already impressive discography by this trio from El Salvador and Costa Rica, a discography that includes the 2016 EP The Stench of Doom, a 7″ split with Necrogod (Sweden/Costa Rica) entitled The Bifid Tongue of Doom & Death, the 2019 debut album Doom & Putrefaction, and a 2020 7” split with the Dutch band Anarchos named as Ghospels Of Necromancy.

The Rotting Ways of Doom is being released by a small army of international labels across a broad array of formats:

All formats are becoming available this month except the vinyl edition, which is projected for release in the middle of 2023. All the links are below — and you can follow Morbid Stench on social media here: