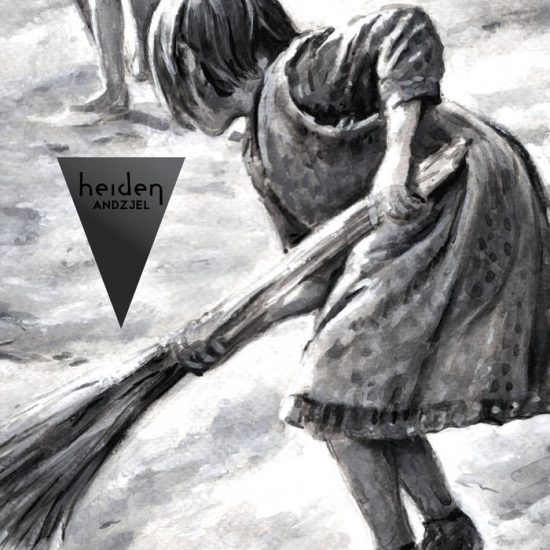 In heavy metal, genre scrambles fail as often as they work. We might go so far as to say that failures exceed successes. Most listeners have pronounced preferences in the kind of music they listen to, and even among those who find a certain degree of mixing attractive, there are limits to their tolerance. Even among “music critics”, there’s a tendency to proclaim that genre-crossing bands are either confused about what they want to be or try too hard to be everything to everyone.

Andzjel, the forthcoming ninth album by the multi-talented Czech band Heiden, is undeniably a genre-scramble of a record. Moreover, the band themselves have a pronounced history of change. If you look at Metal-Archives, you’ll see this genre-jumble: “Black Metal (early); Post-Black Metal/Rock (mid); Post-Rock (later)” — and that doesn’t reflect what has happened on Andzjel, which itself represents another pivot. 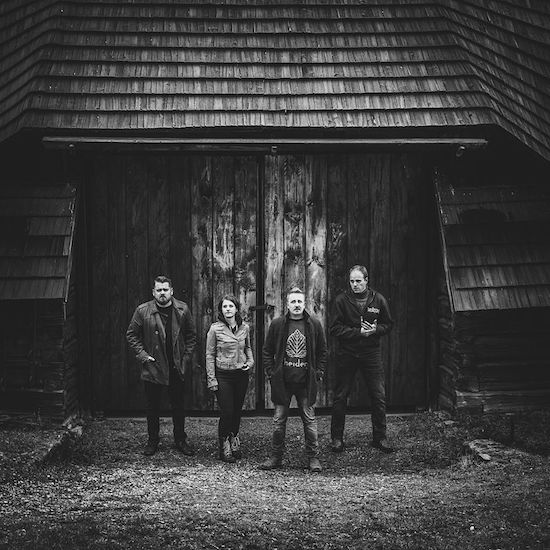 Not surprisingly for a band that’s been around for almost 20 years, there have been some line-up changes over time, but not as many as you might expect. The same Metal-Archives shows that the core trio of Kverd, Varnag (Tom), and Einsk have been there since the beginning, or very close to it, and even Werlinga has almost 10 years with the band. The only newcomer seems to be the band’s friend Murky, who composed and recorded the bass parts.

But nevertheless, some things have changed. With Andzjel, Heiden have moved away from the experimental rock of their last two albums and turned in the direction of what some might call avant-garde or progressive black metal, but the music turns out to be even more varied than those labels would suggest. It’s also far from a radical reinvention. As declared above, it’s a splicing, an integration, but not one that sounds forced but instead organically intertwines the band’s previous interests with something like a return to origins.

Maybe some of this is the result of the themes that inspired Andzjel. As the press materials describe, the record is “thematically set in the inhospitable beauty of the White Carpathians”, and the songs “offer an insight into the souls of the local people, sharing the soil, blood, healing and knowledge passed down through generations… the phenomenon of Žítková goddesses, which the post-war totalitarian regime permanently eradicated.” And further from the band:

The rural and severed feel of the old huts is essential for our upcoming record. A connection with nature that is irresistable and unobtrusive. We dealt with the atmosphere on the new album from many points of view. It’s about the indefinite fear from the outside. It describes the feeling when the world around us has changed overnight and we weren’t there. Extirpation and doubts. HEIDEN are connecting places and sounds, resonating with their hearts.

As for the music on Andzjel, it may help to know that even on the band’s fascinating last album Země beze mě (which you should check out here), there were dark, sinister, and dreamlike elements in the mercurial music (along with a ton of bouncing beats and melodic hooks, both instrumentally and vocally), but those moods are more pronounced now, and other emphatic changes have been revealed as well.

The album’s first single (and opening track) pointed the way. At the outset “Nevěřím těm očím“ is an adrenaline-fueled riot. It inflicts a vigorous percussive beating, and the music flies high and burns as the bass throbs. Gone are the clean vocals, replaced by snarls of maniacal savagery.

But the song makes a sudden change, bringing into play the dreamy keyboard ingredients that were well-evidenced in the previous albums. The music begins to feel like slowly drifting on a night-time stream, with stars winking overhead, and someone who sounds like Tom Waits as your companion. And then the skies begin to gloriously blaze again, as the drums hammer away and the vocals come for your throat once more.

“Nevěřím těm očím“ is a fascinating way to begin, and a sign-post of the splicing to come. In the run-up to the album’s release, the band followed it with a video filmed during a blizzard on the hilltops of Vysočina for the album’s third track, “Musím ti tolik říct” (in English, “I have so much to tell you”).

The funky groove and vintage keyboard melody that opens this new track, coupled with the subdued vocals, the shimmering synths, and the ring of the guitar, aren’t located in any sphere of metal, but pull instead from other old influences, including prog-rock from a distant decade. It connects with the band’s recent musical past, and it creates an enticing spell… but one that the band then shatter with crashing chords, scorching screams, rabid snarls, and an ominous atmosphere of menace.

The song is so simultaneously groove-some and elevating (it really soars in gleaming brilliance as the end approaches) that it could have gotten a lot more radio air-time if the band hadn’t blackened it with the harsh vocals, but doing that elicits applause rather than regret in these quarters.

The album includes five other songs besides those, and today we’re giving you an opportunity to hear all of them in advance of the record’s release on November 11th by Magick Disk Musick. Despite the fact that we chose to lead with the album’s two singles, it’s best to listen to the album straight through from the beginning, to get a full immersion in how the music twists and turns from track to track, and in combination how they build moods in alignment with the album’s themes described above.

Along some musical pathways the album becomes dark, haunting, mystical, and full of peril (“V hodině vlka”), or both seductive and spine-shaking (“Září). The lyrics of “Sviť, měsíčku, jasno” are an adaptation of a Moravian folklore song from the Kopanice region, and the sung vocals sound solemn, but the music is ethereal. By contrast, the blasting drums, the brazen chords, and the jolting fretwork in “Běsů se nezbavíš” make it sound like a wild Bacchanal — until it gets jazzy, thanks to an extended guitar tuned to almost saxophone-like tones.

“Patřím sem” brings Andzjel to a stunning close, with a melding of bombast and angst, of wonder and wistfulness, of soulfulness and sorrow, accompanied by vocals of absolutely wrenching intensity.

As the band make all these maneuvers, the instrumentation shines clear and true, permitting a full appreciation of the nuanced and gut-slugging bass-work, the way the variable drumming provides finely tuned accompaniment to the instrumental maneuvers, the broad range of keyboard accents and guitar tones, and the changing vocals (which do eventually include singing, as well as harsh rasping whispers and gloomy spoken words). And stylistically, the band continue to pull from well-springs of both prog-rock and black metal, with post-metal and some jazziness in the mix as well.

It’s hard to compare this album to anything else, but in some respects it reminds this writer of the surprising musical morphing over time of Hail Spirit Noir and Ulver — not necessarily in all the genre ingredients but in the free-spirited nature of the creativity.

So, to return to where we started, this is a genre scramble, and an unusual one. Does it succeed or does it fail? Well, you can now judge for yourselves. In my view it works wonderfully well.

The main recording session was engineered by Pavel Hlavica and Petr Nejezchleba. The album was mixed and mastered by Karl Daniel Lidén (CRAFT, KATATONIA, IN MOURNING, BLOODBATH).in Tri-Lamb studio in May 2022. The album’s eye-catching cover image was taken from the personal collection of inhabitants of the Žítková village and repainted by Luděk Řezáč.

The album will be released in jewel-case CD, vinyl LP, and digital editions. All are available for pre-order now.

One Response to “AN NCS ALBUM PREMIERE (AND A REVIEW): HEIDEN — “ANDZJEL””