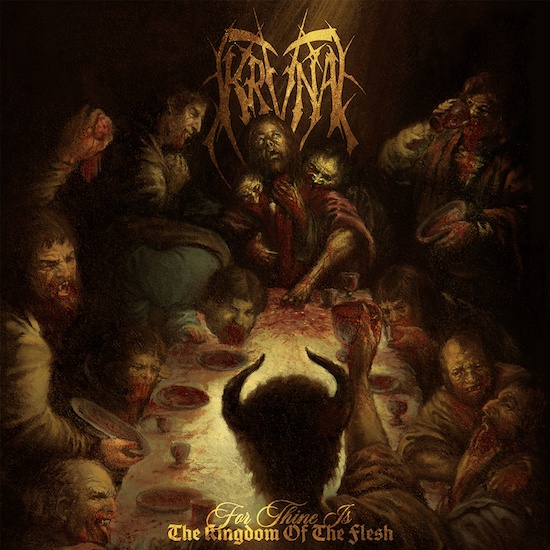 The Australian black metal band KRVNA made its recording debut in September 2021 with a demo named Long Forgotten Relic. It was released by Seance Records and consisted of two substantial tracks. In its lyrical themes, and through the visions of imagination spawned by the music, it explored the vampire mythos from the ancient world to Biblical times, and the black forests and mountainous castle crypts of Balkan and Carpathian incarnations of the legend.

Closely following on the heels of that very promising advent, Seance Records then released KRVNA’s debut album Sempinfernus. It too delved into vampyric mythology but in an even more expansive and far-reaching way. Moreover, KRVNA’s solo creator Krvna Vatra at that time disclosed more precisely the nature of his interest in the subject matter, and how it represented themes that extended beyond old tales of the undead. 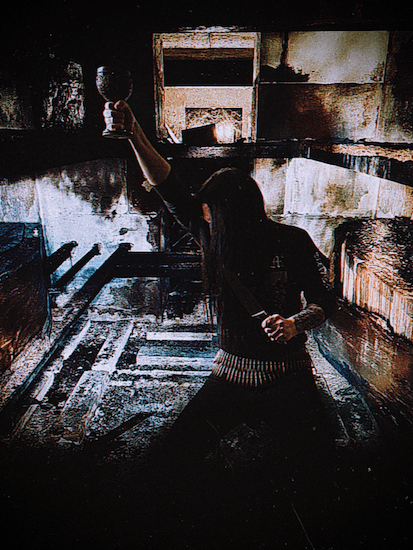 It was inspired by the folk stories and legends passed down through his family and countless generations — as he explained, his mother’s family are Istro-Romanians, people who had moved from Transylvania some 600 years ago to the Istrian peninsula and managed to keep their language and culture alive throughout most of the centuries. The trappings of modernity, comparatively and seemingly soulless, had largely eradicated the concept of the “Striga,” among many other superstitions, and the album was envisioned as a way of “amplifying and drawing light to these old superstitions, once again.”

A little more than one year after the advent of Sempinfernus, Third Eye Temple and Ancient Dead Productions are collaborating to release the second KRVNA album on December 12th, this one named For Thine is the Kingdom of the Flesh. This album also draws on legends of vampirism, but with an even deeper philosophical series of conceptions for which the consumption of blood as the sustenance of life and as a means of transubstantiation, and dreams of immortality, tell us some fundamental things about the human condition and our fear of death. (You can read about these conceptions in depth in a recent interview of Krvna Vatra here.)

The music on Sempinfernus had an expansive and mythic atmosphere, and of course also became a means of rekindling ancient terrors. It had a transportive effect even as it often seemed to ignite everything in its path. The new album is if anything even more startling and stunning.

Take, for example, the title track which premiered last month. Soaring choral voices announce the song in tones of reverence and passion, evoking memories of the old church, yet it is not the conventional sacrament of body and blood that the song embraces, but something more literal and terrorizing.

Like those voices, the riffing rings and soars with signal clarity, but even more frightening in its brilliance, and the drums and bass hurtle at maniacal speeds, matched by harsh, screaming vocals of unhinged ferocity. All these forces, as well as frenetic and fire-bright soloing, combine to create electrifying delirium.

There’s haunting and harrowing grandeur in the music as well. Grief-stricken piano keys ring out within a passage of daunting symphonic magnificence; the guitar moans and writhes in harsh, stricken tones; the music blazes and heaves again, and the guitar slowly wails and pierces the mind as it does so, rendering an unearthly pageant of vast yearning and soul-crushing agony.

Of course, as you can tell from the title of this post, we now have a second track from the album to share with listeners — “In the Absence of Gods“. Like the title track, this one also takes the breath away. Mid-paced in its opening, it’s grim and even swaggering, cold and menacing, but even there the manic high-flown trill of the guitar portends an exhilarating riot — and soon enough, it comes.

Again, the music elevates to epic heights of terrible magnificence while simultaneously battering and burning with unchained aggression, driven to even greater heights of insanity by a shrieking guitar solo. The music is all-consuming in its scale, power, and savagery, but monstrous heaving chords in the low end seem to channel hopeless doom and unavoidable devastation.

Near the end, the music paints a wide-screen panorama of melancholy, capped at the finale by a beautifully soulful and heart-breaking solo.

Third Eye Temple and Ancient Dead Productions are releasing For Thine is the Kingdom of the Flesh on CD format, adorned by the magnificent and horrifying cover art by Greallach that you saw at the top of this article. Coincident with today’s premiere they will launch pre-orders of those, along with a shirt. A cassette tape version will be directly available from the band.

4 Responses to “AN NCS PREMIERE: KRVNA — “IN THE ABSENCE OF GODS””