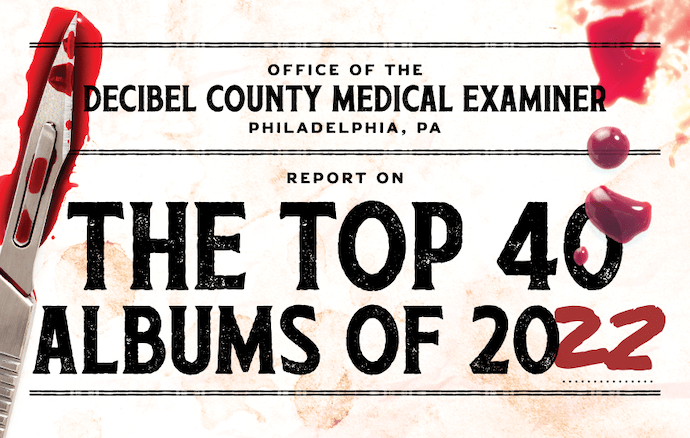 It has become an annual tradition at our putrid site to launch our year-end LISTMANIA orgy with the appearance of DECIBEL mag’s Top 40 list, because they always seem to burst from the starting gate sooner than anyone else — and they’ve done it again this year, although about a week earlier than they did in 2021. There’s also the fact that, in my humble opinion, DECIBEL is still the best print publication out there for fans of extreme metal, and their list always generates healthy discussions, so it’s a fitting way to launch the latest LISTMANIA season apart from the list’s early-bird status.

The DECIBEL list will officially appear in the magazine’s January 2023 edition, which hasn’t yet hit my own mailbox, but DECIBEL again decided (for the eighth year in a row) to scoop their own list rather than letting leeches like me leak it (actually, this year they called people like me “enterprising dorks”). They published the list on-line yesterday, and so I can now again re-publish their list without too much guilt, beyond the sheepishness that comes from being one of the factors that forced them to start outing themselves in the first place. 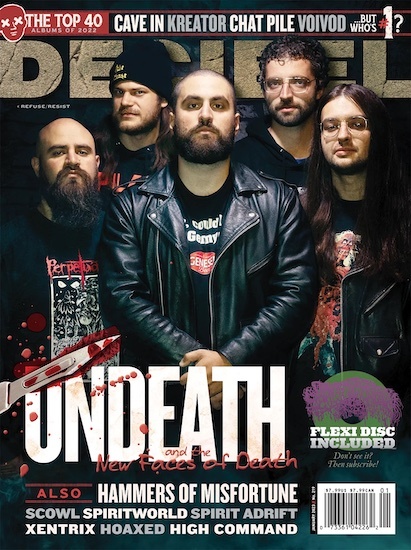 Of course, there will be a lot more content in the January issue. It includes a cover story on “Undeath and The New Faces of Death” (a reference to what DECIBEL calls “the new wave of American death metal bands that dominated the year”), a Hall of Fame article on the making of Hammers of Misfortune’s The Locust Years, a bunch of new album features, editorial comment on the records that made their year-end list, and more. It will also include a Sanguisugabogg flexi disc. You can order a copy of the issue HERE.

Before turning to the DECIBEL Top 40 I’ll share again the thoughts that I share every year at this time about the phenomenon of year-end lists in metal. I see no reason to amend the words very much, especially since that would involve effort.

Such lists continue to serve several useful purposes. One, of course, is to introduce fans to albums they may have overlooked. I also know people who don’t buy much music during the year and actually wait to read year-end rankings before preparing their shopping lists. And, perhaps most obviously, they give us something to discuss and argue about. Because apparently we don’t have enough to argue about already, even within a viciously polarized society in which yelling about something (anything) seems to be the daily past-time of millions.

I usually try to hold my own comments to a minimum when I post these year-end lists from print publications and “big platform” sites, mainly because I can’t manage to make a list of my own. It seems to me kind of hypocritical to publicly take pot-shots at other people’s lists when you’re not willing (or in my case mentally unable) to put your own out there.

Having said that, I think most of us have come to expect that DECIBEL’s list — which this year reflects the combined tastes of nearly three dozen members of the DECIBEL staff — is always going to include some “safe” choices that include big-name bands and the biggest of metal labels, but will also seize the opportunity to spotlight some much more underground selections, and in doing so will introduce them to people who otherwise might have overlooked them.

There’s even one self-releases on this year’s list (but only one, though it takes a high spot), to go along with 4 from Relapse, 4 from Century Media, 3 from Metal Blade, 3 from Nuclear Blast, and 2 each from Season of Mist, 20 Buck Spin, and Prosthetic.

As usual, I haven’t heard all of the albums on the list, in some cases because I had no serious interest in them, which is another factor that militates against taking pot-shots at it. But of the ones I’ve heard, I thought (as usual) most were at least good and some were great. I was pretty sure those would get recognized, especially the ones from bigger names and those with a big PR push behind them, but among the less-vaunted names I was happy to see recognition given to the new records by Doldrum, Castrator, Daeva, Mother of Graves, Tzompantli, Escuela Grind, Mortuous, Nechochwen, and Blackbraid.

There are other interesting features about the list, including the appearance in the No. 1 spot of a band who just released their second album this year, one that we didn’t write about at all, along with 3 others in the Top 10 that we didn’t write about at all. And in that context, I was left wondering who the hell Soul Glo and Still/Form are (now I know). As another friend remarked, the list is also very centered on North America, with only a handful of the 40 from outside the U.S. and Canada.

Well, with that I’ll shut up and let you guys read the list and continue the conversation in the Comments. I’m quite sure you have opinions.

35. Doldrum, The Knocking, or the Story of the Sound That Preceded Their Disappearance, Katafalque

29. Daeva, Through Sheer Will and Black Magic…, 20 Buck Spin

27. Mother of Graves, Where the Shadows Adorn, Wise Blood

1. Undeath, It’s Time… to Rise from the Grave, Prosthetic