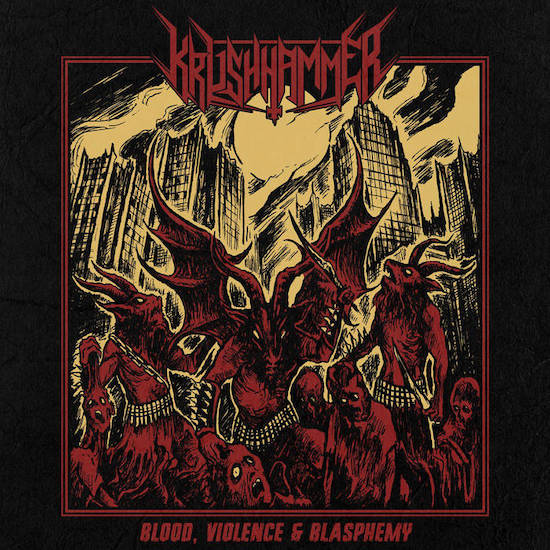 How accurate are all these signals? We shall find out together now. 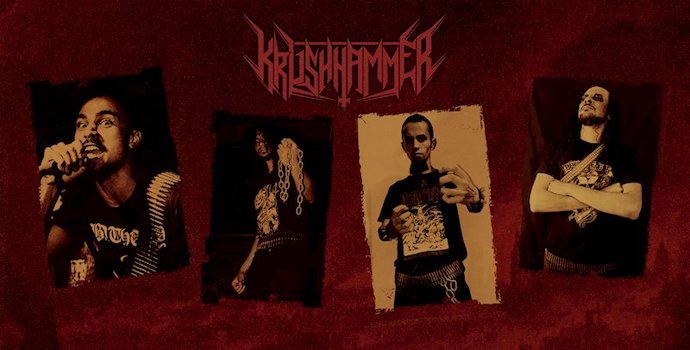 It’s entirely accurate that speed is mainly the name of this game. Even the attacking tornado of the album as a whole rushes by in less than 30 minutes, and so hanging on for dear life proves to be the best survival strategy. And sure enough, mercy is a foreign concept here, in a soundscape where bludgeoning, slashing, and unmitigated vitriol are dominant.

However, this doesn’t mean that KRUSHHHAMMER are ignorant of the attraction of variety, or ragged in their performances. The very first 47 seconds of the album demonstrate that. Not in full gear yet, the beats rock and rumble, the bass noticeably bubbles and swivels, and the guitar creates a mood of dismal menace. With a brazen and boiling fanfare as the tipping point, the band do kick into racing gear in “Morbid Future”, driven by a punk-ish gallop, riffing that sounds cruel and crazed, and scorching vocal hostility.

Yet even with the speed cranked up, the sound is sharp and the mix is even enough that you can pay attention to what each of these barbarians is doing, and so the bass remains a nimble presence, the guitar introduces delirious writhing movements, and the drummer injects bursting mania and boisterous fills.

In other words, even though the galvanizing whine and electrifying whirl of the guitar is perhaps the key feature in a speed/thrash attack like KRUSHHAMMER‘s, the proficiency and inventiveness of the rhythm section is also a vital ingredient, and given the way the album is produced, the band seem well aware of that. The vocals, although relentlessly savage and throat-ruining, are also not monotonous (the lycanthropic screams are particularly spine-tingling).

And although the dominant theme of the music is the unleashing of hellfire, the guitar work is not only really electrifying but also more nuanced than you might expect. The blazing riffs are infectious, and the lead-work is so fast, feral, and frenzied that it continually seizes attention even as it’s sending adrenaline levels through the roof, but frequently the riffing also changes in a way that sounds like the spellcasting of a black-magic sorceror — seductive as well as sinister.

In that way, and others, the band change up the moods of this undeniably infernal music, sometimes creating sensations of berserk violence (“The Witcher” is a prime example of that, where the drums blast and the guitar and vocals sound rabidly unhinged), and at other times exploding in gloriously wild romps around blazing bonfires (see “Into the Night” and “Try Suicide”), or translates moods of despair in the midst of mayhem (“Born to Blasphemy”).

In a nutshell, there’s more going on here than the name KRUSHHAMMER might signal. The music definitely hammers and eviscerates, but these ravagers have top-shelf technical chops and a knack for songwriting that will keep you on your toes, with a feeling for “musicality” that comes through even in the most ferocious riots, plus a vocalist who sounds like an authentic demon blasphemer.

In an even more compressed nutshell, Blood, Violence & Blasphemy is a hell of a lot of hellish fun, straight through to the closer “Satanic Fire”, where you’ll have plenty of chances to scream “666!!!” in your head. See for yourselves:

Blood, Violence & Blasphemy was recorded and mixed at Studio Attack, and mastered by Ivi Kardec (Podridão), and it features cover art by Emerson Maia. Heldprod will release it on jewel-case CD and digital formats, along with with apparel and bundles, and you can pre-order now: As the label says, “Slayer, Nifelheim and Deathrow can be proud of their legacy”.

4 Responses to “AN NCS ALBUM PREMIERE (AND A REVIEW): KRUSHHAMMER — “BLOOD, VIOLENCE & BLASPHEMY””