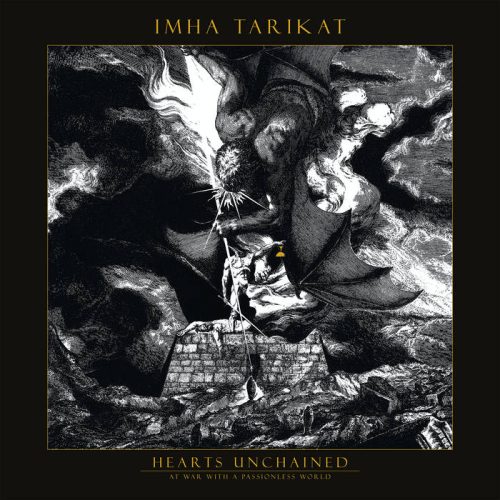 While you’re reading this there’s a good chance I’ll be attending a funeral for one of my oldest, dearest friends.

As you might imagine, feelings have been running high ever since his death, and each of us who knew and loved him have had to find our own way to deal with his loss.

Perhaps unsurprisingly I have been turning to music, even more so than usual, as a conduit for my emotions, and Hearts Unchained – At War With a Passionless World has been one of the albums I have returned to most frequently over the past several weeks.

Of course, I’d like to think that I’d have listened to this record just as much even without this tragedy occurring (after all, I was a huge fan of the group’s previous work and have been looking forward to this one ever since), but sometimes an album hits you at just the right moment, in just the right way, to resonate even more deeply.

And this is one of those times.

There is absolutely no question, from the atmospheric opening strains of “Deeper Within” through to the final ringing chord of “Beasts of Sovereignty”, that the band’s latest album is distinctly and definitively Imha Tarikat at their very best.

In fairness, so was their previous record, but Hearts Unchained takes their signature sound to a whole new level, further embracing and elevating the underlying punky vibes and heroic Heavy Metal attitude to add even more colour and contrast to their uniquely vibrant and emotionally explosive brand of Black Metal.

Don’t get me wrong, there’s more than enough bleeding-edge blasting and sinuous, seething tremolo to satisfy even the most ardent aficionados of the genre, with the anthemic aggression of “Radical Righteousness” and the fever-frenzied intensity of “Brute Majesty” in particular demonstrating that the band are more than capable of cutting loose (and cutting throats) with the best of them.

But there’s also multiple moments – whether that’s the gothy, grandstanding lead-guitar work of “Touch of Mercy”, the moody, dramatic intro of “Flood of Love”, or the constantly shapeshifting rhythms of “Dominator Proselytism Tactics” (one of many tracks where the dynamic, creative drumming of Melvin Cieslar plays a stand-out role) – where it’s possible to draw an even more direct line to the seminal proto-Black Metal (at least, as it’s known now) of bands like Venom, Darkthrone, and Celtic Frost... with perhaps even a dash of influence from prodigious Post-Punk icons like Killing Joke and The Cure to be observed as well.

And it’s this constant tension between modernity and tradition, the balancing of what should with what could be, which makes this album – a record so thrillingly vital and alive in a genre more associated with death and decay – such a captivating, cathartic, and subtly complex work of (blackened) art.

Hearts Unchained will be released on December 2nd by Prophecy Productions.

2 Responses to “IMHA TARIKAT: HEARTS UNCHAINED – AT WAR WITH A PASSIONLESS WORLD”