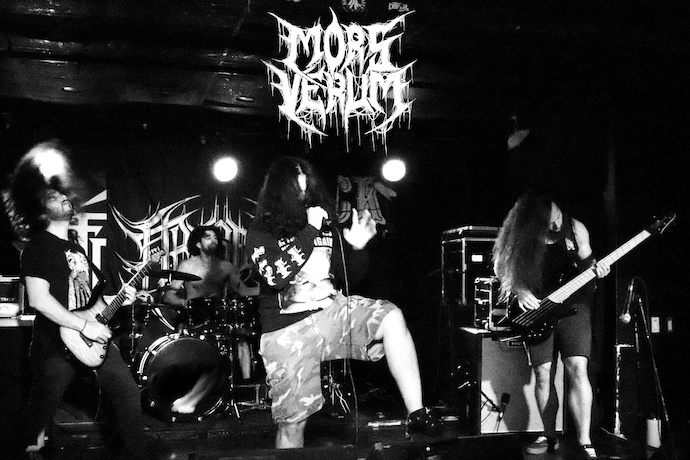 Almost exactly one year ago we had the pleasure of premiering a song from a then-forthcoming EP (The Living) by the Canadian death metal band Mors Verum. In commenting on that ever-changing EP, we made reference to the music’s volcanic viciousness, its firestorms of mind-mauling dissonance and bursts of head-twisting technicality, and its capacity to induce feelings of madness, violent chaos, pestilential peril, and shattering emotional downfall.

Now we’re returning to Mors Verum, and hopefully introducing even more people to what they’re all about, through our premiere of “Purging Waterloo“, a video of the band’s full 35-minute set performed in Waterloo, Canada, in July of this year.

The video was shot from multiple camera angles and recorded with professional sound quality that provides listeners with sharp insights into what each performer is doing at any given moment. The setlist begins with three songs from Mors Verum‘s 2019 debut album Deranged, and then moves to four of the five tracks off that 2021 EP, The Living.

It’s a tight performance, and one that vividly displays Mors Verum‘s ability to inflict brutally bludgeoning punishment, to drop jaws with the intricacy of the music and the technical proficiency of its execution, and to scramble heads through frequent forays into freakish discordance. For music of such bone-breaking belligerence, it’s also a twisting and turning roller-coaster ride through hellish realms.

Given the way the setlist was arranged, you’ll also get a good impression of how the band’s music has evolved and progressed from the album to the EP, becoming even more inventive, complex, and… it must be said… nightmarish. Indeed, the mad intricacy of the newer songs makes watching their live performance even more of a fascinating thrill. But make no mistake, the grooves in the newer songs, which often seem to come and go with abandon in the midst of all the tempo changes and high-wire fretwork acrobatics, still hit hard enough to fracture, bruise, and get heads moving.

We also want to share the following introduction to the video from Mors Verum guitarist Mrudul Kamblel, which includes some exciting news too:

“We are thrilled to release this live show recording for our followers outside Canada and all the others who have not been able to see us live yet. We would love for them to experience our live energy from the comfort of their homes. This live set will also be available on Spotify and Bandcamp. We are currently working on a new album and are looking forward to releasing it next fall on Transcending Obscurity.”

This was the band’s first show in their hometown of Waterloo, Ontario with a complete lineup. It was a DIY effort, with all the video and audio recordings being edited, mixed, and mastered by guitarist Mrudul Kamblel at his studio Erb Street Recording. Credit for the audio capture goes to Jonah Kay.

You’ll want to keep an eye on the locations linked below for further news as it comes about the band’s new album on Transcending Obscurity. And if you haven’t already done so, be sure to explore both The Living and Deranged, which are available on Bandcamp, where the recording of the “Purging Waterloo” set will also be released.