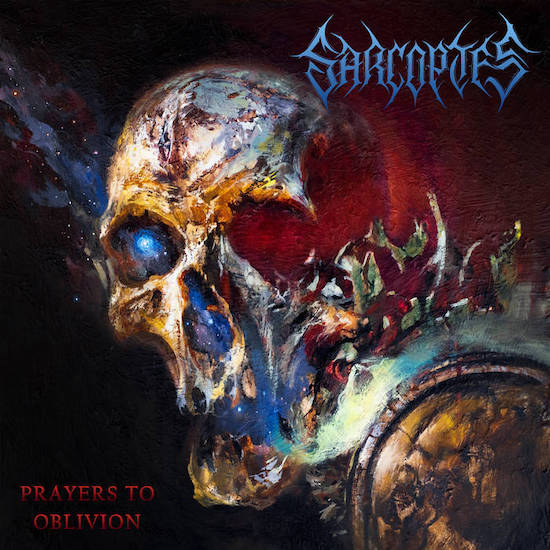 Everyone who visits NCS regularly knows full well that when I come across music that really electrifies me I have a pronounced tendency to get carried away with words as the music carries me away. I was reminded of that when I re-read what I wrote about Plague Hymns, the 2020 EP by Sacramento-based Sarcoptes:

In the most brutally shorthand way of describing these two songs, they’re a fashioning of blackened thrash, but that label really under-represents how remarkable they are. They do indeed blaze like hellfire driven by gale-force winds, but they also feature beautifully chosen symphonic accents as well as the kind of glorious guitar-work that brings to mind bands from the forefront of classic heavy metal.

And from there the words went on and on and on, with references to the music as “black magic alchemy — sinister and vicious, ecstatically wild, a breathtaking, turbocharged thrill-ride through sulfurous, fire-bright nether-regions”, “diabolical harmonies and the skittering voracious sensation of demonic feeding frenzies in the midst of possessed screams”, “head-spinning dementia leavened with a panoply of sorcerous leads and the shine of supernatural, phosphorescent majesty”, and the kind of “crazed, darting ebullience” that made the music “sound like bats on after-burners, flying with abandon from caverns lit by the blaze of burning souls”.

And there was more, but you get the idea. And it’s about to happen again, because Sarcoptes now have a second album (Prayers to Oblivion) set for release by Transcending Obscurity Records on
February 24th. 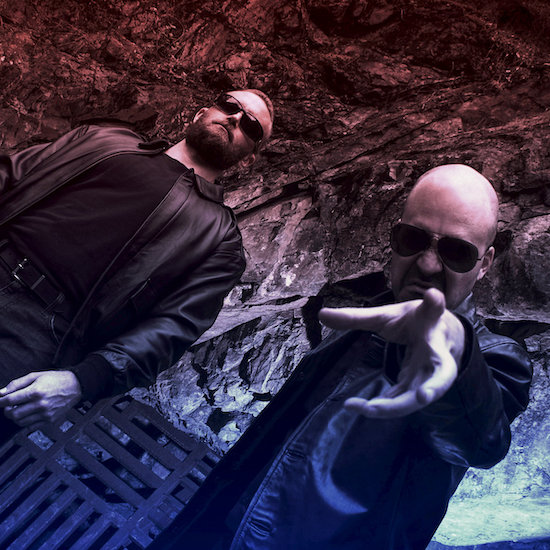 Sarcoptes have distinguished themselves from more run-of-the-mill black/thrash bands in other ways besides what I attempted to convey through the foregoing frothy words. For example, the subject matter of the new album is out of the ordinary. Each of the songs follows an interconnected series of historical tragedies in chronological order, from the events of World War I through the Spanish flu and on to the Vietnam War.

Another distinguishing feature of Sarcoptes has been their interest in creating long-form experiences. That stands out again in considering the track list of Prayers to Oblivion. It includes five songs, and three of those are in the 13-14 minute range (or a bit more).

In the run-up to the album’s release Transcending Obscurity has chosen (so far) to stream the middle three of the five tracks, one by one and in the order in which they appear on the record: “Spanish Flu“, “Dead Silence“, and “Tet” — the song we’re premiering today.

“Spanish Flu” is one of the two shorter tracks on the album. Before experiencing our own pandemic, most of us probably knew little or nothing about that previous influenza plague, which quickly followed the slaughter of World War I and killed at least 50 million people worldwide during 1918 and 1919. Sarcoptes musically render that horror through thunderous drum assaults, rabid screams, maniacal riffing, and daunting symphonic overlays.

The breathtaking delirium in the music is frightening, and happens on a vast scale, so much so that the song seems to swallow the listener whole. It also includes bursts of thrilling thrash riffage, renderings of blaring chords and blazing orchestral grandeur, and melodic accents that portray agony and hopelessness.

The following track, “Dead Silence“, is one of those three extravagantly long songs, and because of its length Sarcoptes range more widely than they do on the full-throttle “Spanish Flu”. They quickly open fire, pulling the trigger on machine-gun drums, but wrap that attack in a dense swath of savage and soaring sound that becomes both increasingly vicious and increasingly celestial in its harrowing magnificence. The band again work in turbocharged thrash riffs, rapidly varying drum patterns, a panoply of darting and swirling fretwork, and mad organ arpeggios, augmented by yet another berserk vocal performance.

With the pedal jammed to the floor, Sarcoptes create a riotously head-spinning experience, but they do ease back on the throttle to create moods of dread and misery, with immense groaning chords and methodically skull-smacking drumwork. Even with an extended guitar solo (by guest performer Bobby Koelble) that becomes an eye-popping fret-melter in the midst of that slow-moving musical calamity, the feeling of utter downfall is palpable, and made even more devastating by the sweeping lament of high-flown synths and the grief-stricken instrumental finale.

If it weren’t already clear, “Dead Silence” proves that calling Sarcoptes a “black thrash band” is something like calling a whale a fish: There’s a hell of a lot more to it than gills and fins.

Apart from showing just how extravagantly Sarcoptes interweave their many genre influences, which range across a broad soundscape of black metal and far beyond, the album is also designed to keep listeners on their toes, and off-balance. And so “Tet” follows the haunting conclusion of “Dead Silence” with another heart-pumping, full-bore eruption. Frenzies of bright guitar work pulsate within a tornado of obliterating percussion, jittery and jolting riffage, and grandiose symphonics — and the band pick their moment to deliver the most vividly headbang-able sequence of all three songs revealed so far.

For history buffs, the Tet offense was a major escalation of the Vietnam War launched by the Viet Cong and the North Vietnamese Army, and consisted of surprise attacks on both military and civilian positions throughout South Vietnam. The offensive largely failed in military terms, but it shocked both South Vietnamese and U.S. military commanders and the U.S. public, which had been duped into thinking all was going well, and played a significant role in beginning to turn American public opinion against the war.

These three songs together should be more than enough to blaze the trail toward the new album’s release in spectacular fashion, but the two songs that have still not yet been released — album opener “The Trenches” and album closer “Massacre at My Lai” — are the other two of those very long songs, consuming 28 minutes of the album’s run-time between them, so there’s still a lot left to come.

Thematically, those two also address devastating military events, the former focused on the horrors of trench warfare in the First World War and the second on the mass murder of unarmed South Vietnamese civilians by United States troops in the Sơn Tịnh District of South Vietnam during March 1968.

Between them they again demonstrate not just the breadth of Sarcoptes‘ historical interests but also (again) their ability to bring such harrowing tales to life through music of remarkably varied moods and stylistic ingredients, capable of simultaneously appealing to fans of extreme symphonic metal, fire-breathing thrash, and black metal, both ferocious and atmospheric. The songs are intricate and elaborate, viscerally pulse-pounding and dazzling, but also effective representations of peril, suffering, and sorrow.

The album’s fantastic cover art was painted by the fabulous Adam Burke. Transcending Obscurity is releasing the album on digipak CD and digital formats, along with an extravagant array of apparel — shirts, jackets, vests, hoodies, tank tops, sweat pants, shorts (and bags and mugs too). They recommend the album for fans of Emperor, Nifelheim, Daeva, Aura Noir, Deströyer 666, Immortal, Absu, Abbath, and early Satyricon.

2 Responses to “AN NCS PREMIERE: SARCOPTES — “TET” (AND A REVIEW OF “PRAYERS TO OBLIVION”)”