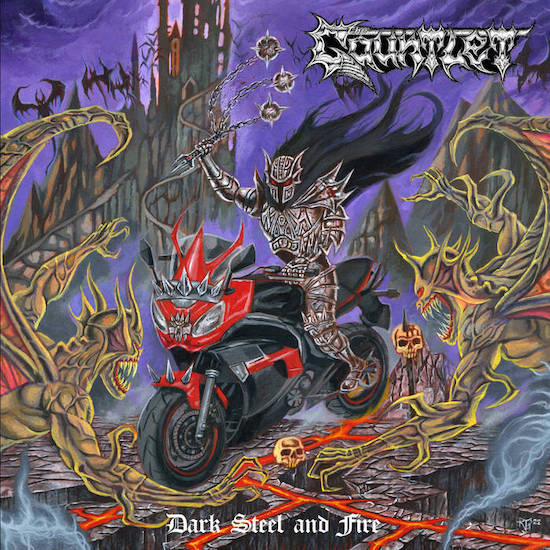 The cover art for The Gauntlet‘s debut album Dark Steel and Fire portrays a hell-raising synthesis of motorcycles and epic fantasy with a distinctly warlike and demonic cast. What you might guess about the music, based on that portrayal is, well, anyone’s guess.

The Gauntlet‘s 2020 debut EP War and Guilt spawned such descriptors as pounding black metal, rocking death, or more jokingly as “stadium Bathory“, and the new record is forecast as an amalgam of influences from the past that include Bathory, Venom, and Celtic Frost.

But let’s quit guessing and find out first-hand what The Gauntlet‘s sole creator Ace Meggido has cooked up this time, and what better way to do that then to check out the debut album’s title track. 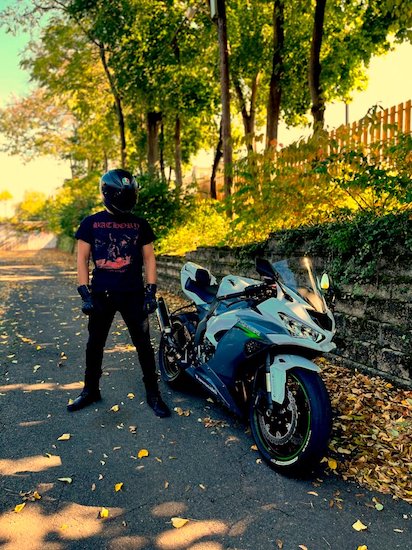 Like that cover art, there’s something about the scratchy guitar melody that begins the song which sounds sinister and supernatural, and then when the drums begin to thump your heart it morphs into something brazen and delirious. Slashing chords and a screaming, acetylene-bright solo combine with a high, slithering lead to keep the music sounding mysteriously twisted and pernicious.

Even after scalding vocal acid spews forth in screams, there’s a feeling that the song is building toward something. The drums begin to clobber with greater vigor, and the shrill lead guitar wails in an uneasy union of madness and despair, and everything else about the song seems more calamitous. The sound of galloping hooves rush through the ominous music, and the guitar screams and wails again, even more tormented than before.

You might have been expecting a racing riot, but what you get instead is something both desolate and deranged, hellish but also haunting.

We’re also including a stream of the album’s first advance track, “Beyond the Limits” — and this one really is the crazed, pulse-pumping riot you might have been expecting, though it’s a damned menace too, and in its one slower movement it creates a mood of gothic horror.

Dark Steel and Fire will be released by the Eternal Death label on January 13th, just in time to give the new year a vigorous kick in the ass. It’s up for pre-order now, and to give you an extra kick in the ass to pick it up,

2 Responses to “AN NCS PREMIERE: THE GAUNTLET — “DARK STEEL AND FIRE””