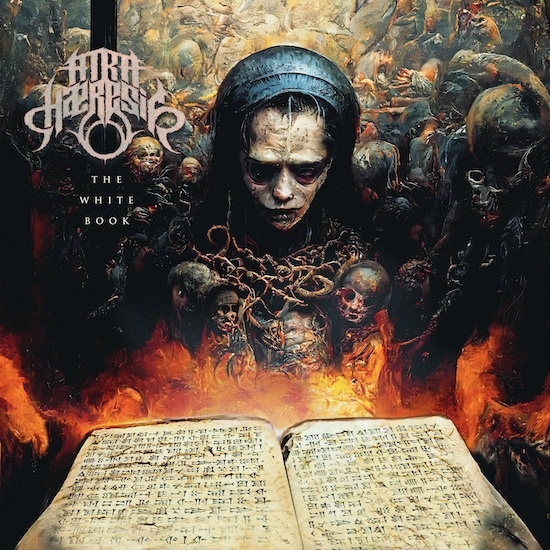 Last year the part-Russian, part-Belarusian black/death metal band Atra Haeresis appeared seemingly out of the blue with an album named Pretium that was their first release. We were introduced to it through a request to premiere the song “Pretium?” in advance of the album release.

In introducing that song, we warned listeners more than once that it would take their breath away and expose them to physical trauma, and eventually we named it to our list of 2021’s Most Infectious Extreme Metal Songs. It still has its hooks in us, and it’s not too late for you to get hooked too:

The rest of the album is also well worth your time, and you can find it here or here.

But as you can see, the reason we’re thinking again about Pretium is because Atra Haeresis have now surfaced again with a new song named “The White BooK“, and we’re bringing it to you today via another lyric video.

It may seem that Atra Haeresis had faded away after the release of Pretium, but that is clearly not the case. The band’s mastermind Alexander Dorokhin has told us that it’s merely a matter of not hurrying. In fact, he says they have almost 14 instrumental tracks for a second album, and of course “The White Book” is ready now, and is being released through the cooperation of the Dutch label Void Wanderer Productions and the band’s own label studio Atra Anduin Records.

This new song proves again that Atra Haeresis know how to embed their music with big hooks of differing kinds, and they begin doing it right away with punishing rhythmic assaults and wild raking and roiling riffage. You can feel the bursts of energy in that powerhouse opening section even as drummer Vladimir Udarnov is administering a severe beating and firing snare-bullets at a high rate of speed.

The band also continue, as they did in the songs on their debut album, to repeatedly change the experience — with guitar measures that ruthlessly jab and seem to wail in agony, to maniacally dart about and convulse in violent seizures of sound, and to lurch like a lumbering beast. The drumming remains a dynamic and attention-grabbing experience throughout these maneuvers, and the nimbleness of the bass makes its own contribution.

The vocals change as well (which won’t be a shock to people who’ve heard Pretium), in this case shifting from monstrous guttural growls expelling words of rage and condemnation to grim Latin chants as the music itself morphs into a haunting and daunting episode before a final explosive crescendo.