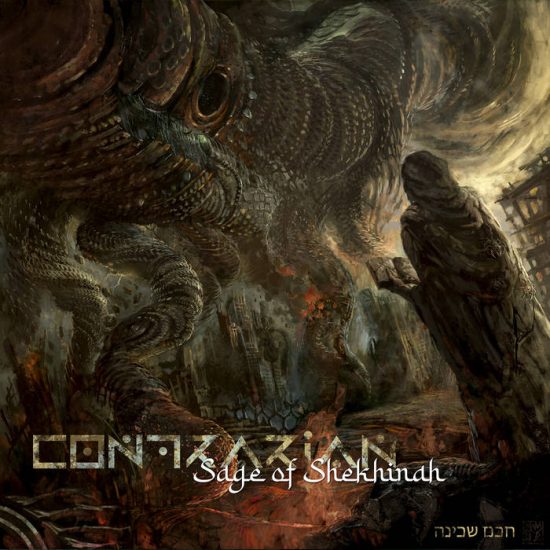 This round-up of new music will be short, but of course I think it’s also sweet. I have just enough time for three recommendations before my gilded carriage of a morning turns into the rotting pumpkin of my day job.

Until I looked I had forgotten how many premieres we’ve done for Contrarian‘s releases (four of them, going back to 2015). What I didn’t forget was how head-spinning their music has been, and so I jumped at the chance to listen to the first single from Contrarian‘s new album Sage of Shekhinah. The remarkable cover art by Guang Yang just sweetened the pot. 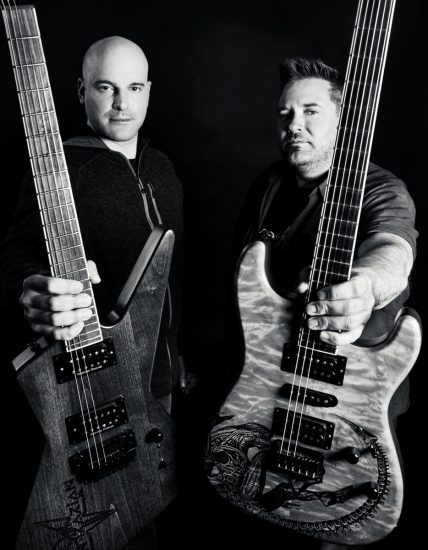 You can take a clue from the song’s name, “In Gehenna” — that biblical place where children were sacrificed by fire and the wicked were condemned to divine retribution. As expected, the song is filled with fleet-fingered fretwork on both guitar and bass, which in combination create crazed but also anguished sensations, as well as off-the-hook drumwork and terrorizing vocal derangement. But fluid melodies (some of them created by dual guitars) also swirl through the instrumental fireworks, and they underline the moods of suffering in the music.

Fitting for such technically impressive high-wire performances and so many layered moving parts, the music was produced with striking clarity. (Credit to Heavy Blog for the premiere.)

Sage of Shekhinah will be released by Willowtip Records on March 17th. 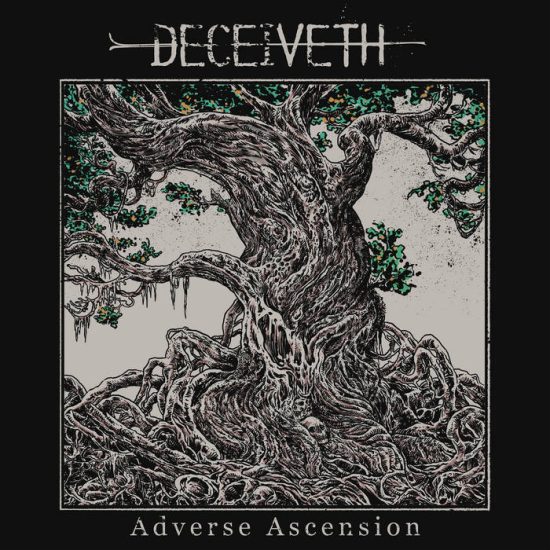 I didn’t know exactly what to expect when I began listening to Adverse Ascension, an EP released on New Year’s Day by this one-man band from Blue Ridge, Georgia, even though it was described as “dark & dissonant metal inspired by Godflesh’s Streetcleaner, and further polluted by Killing Joke and Integrity.” I almost don’t want to prevent you from getting the same shock I got when “TOTEM” begins. But hell, even though I’m going to tell you that the pounding feels like God’s own jackhammer on Judgment Day, I suspect you’ll still suddenly feel like all your teeth have been loosened in their sockets.

There’s more to “TOTEM” than megaton pulverizing. Shrill swirling and screaming tones also make the music sound chilling, and the distorted echoing vocals are so monstrous and macabre that they make an already frightening experience even more nightmarish. But on top of all that, the song catches a groovy, yet sort of off-kilter, booming beat that brings an even stronger industrial feel into the mix, and all the screaming and swirling textures around it reach new heights of tortured madness.

Two more songs to go, if you survive that one with your sanity and your spine intact. The rhythm in “Slave to the righteous” is tribal, as well as industrial, still brutishly heavy as hell, though the bass sounds warm. Again, there’s a collage of other sonic ingredients surrounding the grooves, which make the song psychoactive but also create feelings of despondency and despair. I don’t need to mention that the vocals remain insane (but I still did).

Much of what goes on within the EP seems geared toward rudely shoving you out of your comfort zone, and that’s true of the closing track “Ovvenmouth” too. But there’s no escaping the primal appeal of the bone-jarring beats, and the vocals in the song are abrasive yells, scraped-raw and enraged yet just on the cusp of singing. The song also drifts away into a very strange other-world where the bass becomes your only friend, even though it wobbles and weaves in a kind of fiendish delight, beckoning you onward into a scary spirit realm.

P.S. The Bandcamp page for the EP reports that sales of this EP will be donated to farmsanctuary.org.

P.P.S. Deceiveth is the work of Scott deFusco, who previously played with such bands as December Wolves, Trap Them, and Extinction Agenda. 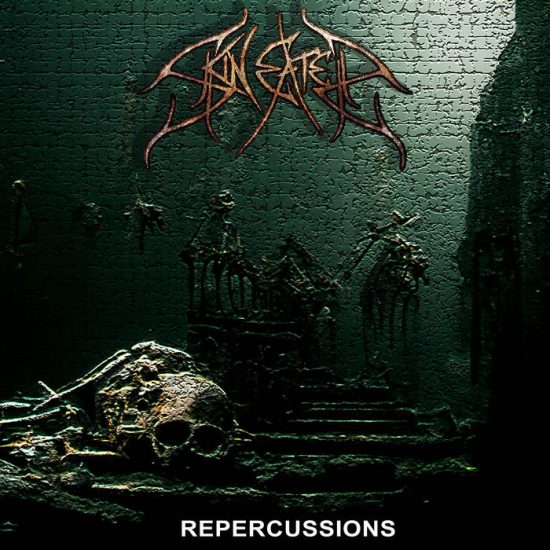 Last, I have a powerhouse new EP that dropped on Christmas Day that I just got around to checking out. Named Repercussions, it’s the first new Skineater release since their Cerebral Relics EP five years ago, and it finds the band careening among slightly different death-metal genre variants on each track, with their former vocalist Jörgen Ström (who sang on the debut album Dermal Harvest) back screaming on the song “Bleeding Through The Walls“.

Before you get there, you’ll encounter “Thrashing Beast“, which sounds like its name — a furious, feral, and frenzied attack of death/thrash that administers a vigorous clubbing and a broiling evisceration, but also gets very grim and gloomy. And then you’ll come to “Terror on the Run“. It drives on all cylinders too, but sounds even more brazenly infernal. Like the EP opener, it’s home to an exhilarating guitar solo (but all the solos on the EP are spectacles), along with a plethora of darting and demented fretwork, berserk vocals, and enough kidney-punching grooves to leave blood in your urine.

And then you’ll reach “Bleeding Through The Walls“. There’s no slowing down there — if anything it’s more ravenous, riotous, and explosive than what precedes it, with truly maniacal vocal barbarism, violent guitar assaults, and screaming string torture.

And to close, “Angel Sick” manages to sound both dismal and grand, both delirious and diseased. In some respects it’s a white-hot fret-melter but it will also brutishly stomp your skull into paste while the lead guitar and the vocals scream bloody murder right in your face!

One Response to “SEEN AND HEARD: CONTRARIAN, DECEIVETH, SKINEATER”