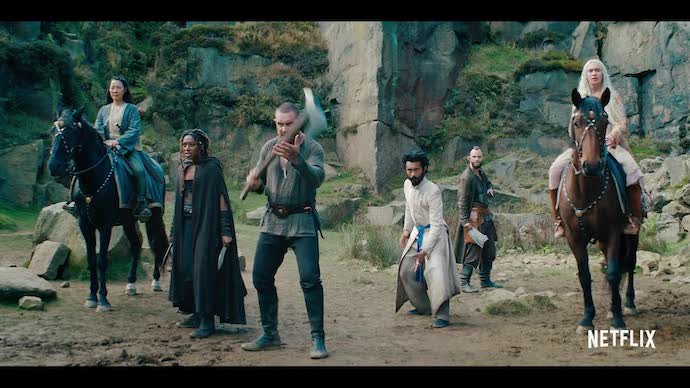 (Axel Stormbreaker returns… and we’ll let him explain what he’s up to this time.)

I didn’t expect myself writing another movie-themed article that soon. Mostly due to my usual concern of saturating a fun idea; especially since a similar installment has been in the cards for a quite a while. The thing is, while I’m firmly convinced we can never have too much of a good thing in our hands, it’s best to remain prudent towards any concept that’s relatively uncommon in metal reviews.

But then again, there are definite exceptions to any rule. Especially, in the occasions when any admirers of fictional cinematography experience outright negligence to an offensive degree. An educated guess is most writers out there will either praise, or bash, or even unfold mixed opinions any readers are (vaguely) aware of. So, here are six, six, six cult records instead (or any other of your own choosing) to play repeatedly, while watching The Witcher: Blood Origin on mute.

Most of the actors look embarrassingly atrocious. To a point they appear closer to some odd version of Halloween tourists, who, most likely, participate in a fantasy-themed competition event. I find trouble deciding whether what we are viewing depicts an unusual marketing tactic, or it’s just taken too much for granted that any who like the main series will watch the prequel too.

In return, we are going to recommend some enjoyable old-school Denial of God antiquities (possibly, the Klabautermanden EP). An ugly, once primal, Danish black metal band any admirers of the old sound deeply appreciate. Just because their birth was equally inspired by both the theatrics of Alice Cooper, Mercyful Fate and Death SS, as well as the feral morbidity of Norway’s Mayhem.

“Come with me if you want to live”? Who are you exactly? The Terminator?

And what’s the matter with references to other fiction movies? Fangorn trees are better at small talk. Let’s not forget the said series’ content creators offer zero insight on parallel worlds, or invest properly on the whole The Witcher mythology. One could actually claim the said result feels closer to a fairy tale version of The Hobbit, Game of Thrones and Marvel’s The Hulk. All mixed into an inconsistent/rushed story.

In return, let’s remember how Necrophobic‘s late ’90s era is gravely underrated, especially in regards to Bloodhymns. Just to point out the fact that cheesy lines may serve crunchy death metal does not entail it’s okay to apply similar writing skills into small-screen narratives. So, that the two may become three, and the three may become four, and the four may become five, and so on. Man, now that I’m thinking about it, Necrophobic would have done a better job in comparison.

CGI monsters reminded me of the worst parts of the Spawn movie, so cheesy ’90s effects are still cool. Albeit even Spawn was, in fact, better, since the clown didn’t have to transform into a slimy demonic toad to unsettle the audience. That makes me consider of how The Witcher‘s content creators could come up with more creative ways to better disguise some budget issues. Or at the very least, show some real effort instead.

In response, we are going to recommend some cheesy majestic black metal. The odd kind we encounter when programmed drums sound triggered to a fault. We are, of course, discussing here how Portugal’s Sirius bear no shame in concealing their deep, utmost worship of Limbonic Art’s In Abhorrence Dementia and Emperor’s In The Nightside Eclipse by blending both styles in a symphonic, yet mechanical mix. After all, Nocturnal Art Productions did release all the classic Limbonic Art material (along with Odium’s The Sad Realm Of The Stars); a once promising label originally founded by Samoth in the year 1994.

I think this series got mixed with the action-packed projects Netflix uploads, because instead of a team of sword fighters and mages, we got The Pretendables instead. Seven characters in total who are unlikable for the most part, as they carry neither the weight, nor the grace any of the main The Witcher characters do.

Although, to be fair, all actors appear to be doing their best, as the script they’ve been given is too horrible to rectify. So, what we are going to recommend is a deep, expressive album, as a small note of appreciation for the effort alone. Just because, what Czechia’s Root accomplished here is an abyssal dark metal approach that’s concise, calibrated, and yet soulful to a degree The Book‘s structural aspects deserve to be taught at musical schools around the globe.

Most of the plot holes are either explained, or hastily narrated, instead of depicted by actual scenes. Simple as that. I knew all we’d get would be a summarized prequel series, yet I didn’t expect such a disturbing mess. Independent films made by college students flow better in comparison.

In return, I’ll prefer to recommend the coolest, yet incoherent release I can think of. Ages Gone was a German avant-garde death metal band who only got to produce one demo tape in the said style (that I am still searching for). What we are dealing here is the full-length that followed three years later, a self-financed experiment that’s rather incoherent, since they discarded the entirety of their former metal influences. Which makes it an odd, yet wonderful, album that won’t cost more than a buck or two, should you see it pop out of a “free with any order” discount bin.

Sword-fighting scenes consist the series’ sole salvageable aspect. Yet, their purpose is mostly to serve the aforementioned rushed narrative of how the entire fellowship was put together. What we get is complete absence of meaningful climaxing, as well as zero insight as to why any of the fights are actually happening. They just put a standard bounty on the two main characters, so the ensuing hunt could begin. The fact none of them was considered an “active” threat means nothing, right?

In return, I actually thought about recommending some classic Sacred Steel material. “Heavy Metal To The End” and so on. But it would further ruin the article’s consistency, so let’s recall how Swordmaster’s days on Full Moon Productions offered some of the most engaging thrashy black metal we’ve heard to this day. I am, of course, referring to Wraths of Time and most specifically to “Upon Blood And Ashes”. Just because every time I hear this song I only think of noble gladiators spilling each other’s blood.

Metal has triumphed once again? Well, to be frank, this short analysis was nothing besides a fun way to unearth some nostalgic tunes, as well as to state why both cinema and TV content creators need to take art seriously. In the likely occasion the above recommendations are not your jam, I should add instead, as a short bonus, 2022’s Junkyard Drive album to play while watching the series. Just because I know even the grimmest of you old goats out there may dwell in obscurity, yet you secretly enjoy those sharpened, refined bits of fast-and-furious hard rocking once in a while.