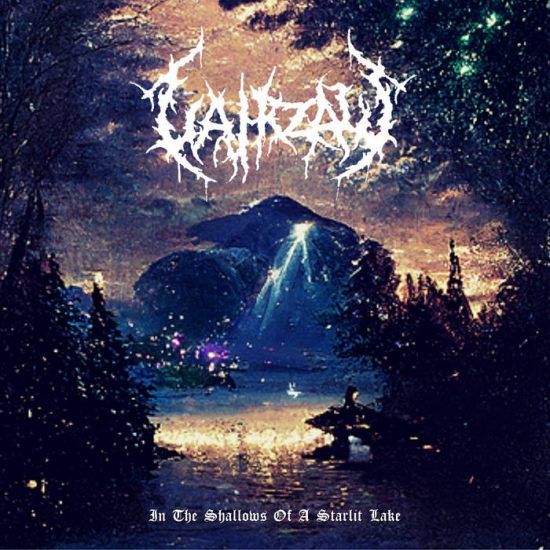 The history of Vahrzaw stretches back to 1992. They adopted their current moniker a few years later and endured until 1998. After a seven-year long hiatus, the trio was back in the saddle in 2005. As our long-lost Norwegian friend Gorger wrote long ago, “They made an early switch from lethal death metal to pitch-black death threats, but have retained elements of capital punishment that shine through in a threatening matter”. In that same piece Gorger described the music of the band’s then-reissued 2014 album Twin Suns & Wolves’ Tongues:

“The sound is ripping, and the band master the genre with panache, sporting excellent and varied tunes, peppered with hostile rage, bestial dark moods and delightfully unpredictable transitions, seasoned with delicate ghastly and morbid solos, proggy technicality, and furious, rasping vocals. The lads offer authentic uncompromising black metal without boring the listener with generic and uneventful structures. Roughly half a dozen bands per ten could have learned a thing or two from their clever compositions, which make no compromise and sacrifice nothing at the expense of hostility, aggression, anger, and disgust.”

We’ve repeated those words because they vividly capture much of what continued to make these Australian such a powerful force through the ensuing years, over the course of 2018’s Husk and 2021’s The Trembling Voices of Conquered Men, even though the music also evolved. And now, seven years on from that last album, Vahrzaw are bringing forth a new one named In the Shallows of a Starlit Lake through the good graces of Bitter Loss Records. We had the pleasure of premiering songs from the band’s last two albums, and now we get to do it again with the new one.

As the band themselves say, the new album marks “a return to our black metal roots where the old guard dominated extreme metal. Early incarnations of Satyricon, Emperor, Impaled Nazarene, Ulver, Gorgoroth, Mayhem… and the demos of Carpathian Forest, Sorhin, Setherial, and Thy Serpent. Everything raw and live sounding with the addition of synths and soundscapes. Minimal fuss. Maximum speed.”

The track we’re bringing you today, “Phosphorescent Sunrise“, is viscerally compelling, both feral and ferocious, but it’s also a dynamic and even elaborate experience of changing moods.

Initially the guitars whine and writhe, the volume building slowly from silence as if we’re fearfully creeping toward a frantic hornet swarm. Things soon get much more vicious, with the double-bass kicks hurtling, the riffing transforming into a scathing, roiling mass, and the vocals screaming in unhinged fury. The effect is electrifying, and the song adds to the voltage by continuing to change, with rapidly shifting drum patterns and savagely slashing chords in the mix.

After a dismal solo guitar bridge (punctuated by a big grunt), the frenzy resumes and the music rises, indeed like a phosphorescent sunrise, above a hefty meandering bass line and a pulse-punching snare beat. There’s splendor in the music, but it’s a dark and perilous splendor threaded with tones of despair, and it builds toward a traumatic fever, with the guitars in a spasm and the drums blasting. Near the end the lead guitar seems to scream in the midst of chaos.

The impressions above are our own, but we’ll also share Vahrzaw‘s comment about the tale of the track:

“Superficially, ‘Phosphorescent Sunrise‘ is a story about a girl who stalks and butchers a dog. The audience is witnessing the birth of a serial killer. But, at its core, it’s an exploration of Freud’s concept of displacement. The girl is angry with someone more powerful, but she cannot express this anger. So, she lashes out at something safe; the dog.”

“Phosphorescent Sunrise” is the third and final track to be revealed in advance of the January 28 release of the full 7 tracks and 40 minutes of music that make up In The Shallows Of A Starlit Lake. Through the album’s Bandcamp player, we’ll give you the chance to hear the first two. Both of them thrive in the midst of gale-force conflagrations, but have their own distinctive features.

Th eerie and exalted wails of a synth appear in the magically mesmerizing “Pale Lechery” as well as the exotic dance of an acoustic guitar instrumental, a dance joined by the electrified instruments. In “The Amber Glow of the Gaslight” the music swirls in a breathtaking froth, like a glorious but frightening trip through rapids on a dangerously small craft, but it has its own interlude, in which the synths create a panoramic vision of wonder, which the full band then carry forward in an experience both magnificent and dire.

The whole album is very much worth adding to your collection, and pre-orders are open now: