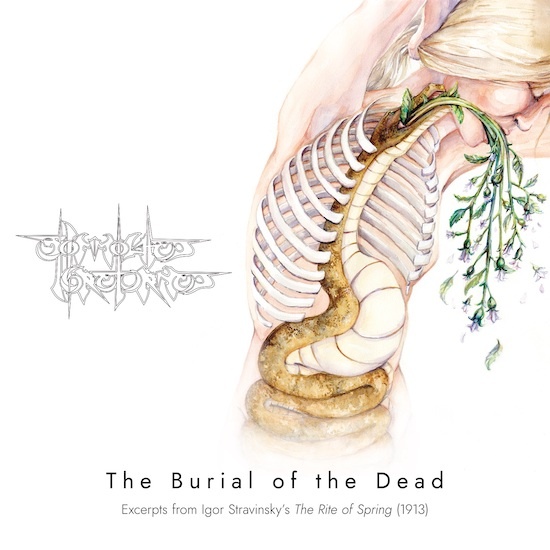 Sometimes in our song premieres (in this case one that’s presented through a lyric video), it’s best to cut to the chase and then come back and fill in the back-story. This is one of those times.

The song here, which is as fascinating as it is unnerving, is “The Augurs of Spring (The Burial of the Dead)“. It’s the second movement in a rendition of excerpts from Igor Stravinsky’s 1913 orchestral work The Rite of Spring, and the people responsible for this rendition have taken the name 30 immolated; 16 returned. The lyrics, which seemingly appear as random words, were inspired by T.S. Eliot‘s great poem “The Waste Land“.

A compelling rhythmic pulse runs through this performance, executed in different ways, from primitive, titanic pounding by all instruments to brittle chords or a popping snare (and more). Around that reflex-triggering pulse (which occasionally changes in jarring ways), madness ensues — a cavalcade of burbling bass notes, dissonant slithering, seething, and screeching guitars, frantic drum acrobatics, insectile fretwork fevers, and an array of caustic growls and howls whose lunatic vehemence is almost as unsettling as all the bizarre instrumental intricacy.

It is, in a word, wild. Stravinsky may be spinning in his grave, almost at the speed your own head will spin. END_OF_DOCUMENT_TOKEN_TO_BE_REPLACED