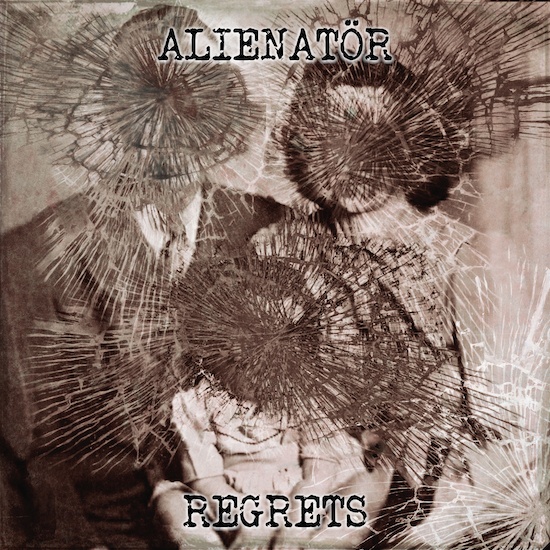 Not long ago, November 25th to be precise, the Canadian band Alienatör from Thunder Bay, Ontario, released their second album, Regrets. It’s the kind of album, coming in the late fall from a largely unheralded group, that easily could have flown under the radar. That might have been good for radar screens, which otherwise would have been fractured from the impact, but not so good for listeners, who might have missed a strikingly multi-faceted and emotionally raw and uncompromising experience.

“Sludge metal” might be one label for what you’ll find on Regrets, but that descriptor is too confining, because it doesn’t capture the music’s other ingredients, which range from punk and hardcore to noise rock, or the acid-drenched knife-storm of the lead vocals, which would make most black metal bands proud. Not for naught has the album been recommended for fans of Unsane, Converge, Cursed, Botch, and Jesus Lizard, but those references probably don’t do Regrets complete justice either.

It’s fair to say that Regrets reflects a dark and chaotic time in history, “exploring personal themes, as well as racism, and abuse of power in Canada and the erosion of truth we’ve seen in modern times” (as the band say), but there’s as much fight in the music as there is disgust and despair, and glimpses of self-reflection and o beauty that seem like a window to better times that might come, even if that now seems like a fool’s bet.

In a nutshell, even here in the year’s dwindling days, this is a free-wheeling and cathartic album that’s worth attention. The more people who her Regrets, the more fans it will earn, and to help give it a push we’re premiering a video for the title track today. END_OF_DOCUMENT_TOKEN_TO_BE_REPLACED