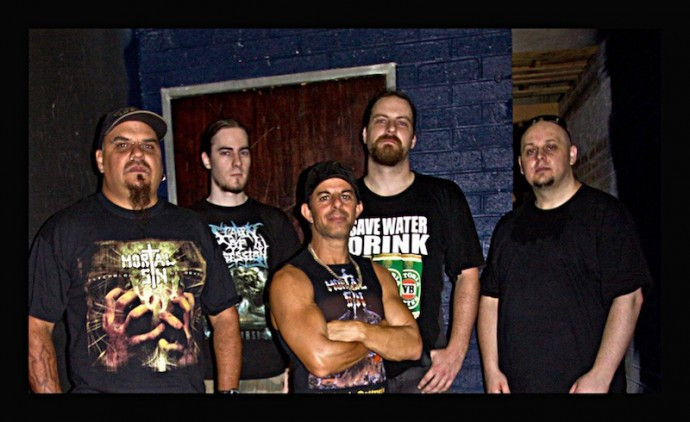 (In this post, we bring you an interview by Dane Prokofiev [formerly known as Rev. Will around these parts], and the subject is Andy Eftichiou, bassist and last remaining original member of Australia’s now-defunct Mortal Sin (pictured dead-center in the above photo). Dane would like to thank Liam Guy — editor of The Fallout magazine and drummer for Brisbane-based Malakyte — for his help with this interview.)

Australia’s now-defunct (again) Mortal Sin had always been plagued with line-up woes. Taking into account the more recent internal strife that ended the  band’s career once more, it was the fourth and seemingly the final time the band would split up for good; and it was just after the latest line-up had found a new guitarist in the form of the young Ryan Huthnance (second from the left above) and the new vocalist Dave Tinelt, too (far left above).

The Australian thrash metal veterans were well known for being labeled as the “Next Big Thing” in the early years of their career, thanks to their well-received debut full-length album, Mayhemic Destruction (released in 1986). It seemed set to be a most promising career, with highlights of their active days being their 1986 signing of an international album deal with Vertigo Records, the UK sub-label of the titanic Phonogram Records (to which Black Sabbath and Metallica were signed to during its early days)—which re-released Mayhemic Destruction worldwide in 1987; being tour support for Metallica on their “Damaged Justice” tour in Australia during 1989; and working with famed producer Randy Burns on their first EP, Face Of Despair (released in 1988).

By a stroke of luck, NO CLEAN SINGING managed to catch up with one of Mortal Sin’s founding members and long-time bassist, Andy Eftichiou, nearly three weeks before the band’s fourth and supposed final demise, which was announced toward the end of April 2012. We asked Andy about his flashy new hobby-cum-career, reminisced about the glorious days of early Mortal Sin, stared in awe at a recent photograph of Gary Holt wearing a Mortal Sin shirt, and more. END_OF_DOCUMENT_TOKEN_TO_BE_REPLACED