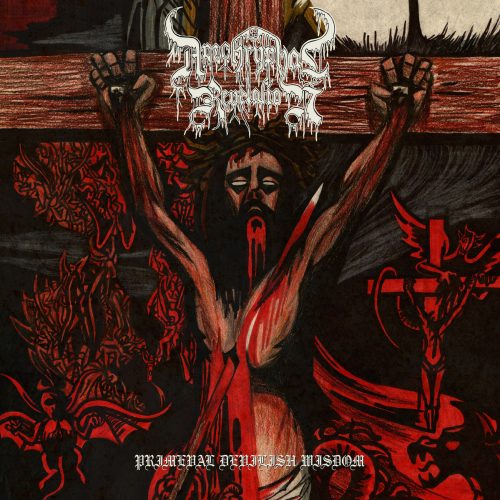 Conveniently, the first three tracks from Apochryphal Revelation‘s new album — the three that actually open the record — can be streamed right now, one after the other. Today, leading up to the November 1 release of Primeval Devilish Wisdom by Nuclear War Now! Productions, we’re adding a stream of a fourth song — “Obscure“. It comes later, sitting close to dead-center in this 15-track destroyer. Probably the right way to do this is for you to run the gauntlet of that opening trio before doing anything else.

We’ll make that easy for you, but as a preview we can say this: The first two of those tracks, the title song and “Wickedness”, are short ones, and that title track is a dream-like organ prelude (with a few rumbles of thunder in the distance). It’s the second one that begins to give you a sense of what this band are up to, even though it’s also an instrumental track — and what they’re up to is indeed wicked. The music pulses with primal, carnal vitality. It melds dirty, thrusting riffage, gut-busting drum blows, and eerie, screaming tones, like the emanations of a tortured specter.

On the other hand, the third track in the opening triumvirate, “Profane“, is longer than the first two combined. Still very wicked it is, still very devilish, but more than a little insane too. You get to hear voices (inhuman echoing roars bouncing from ear to ear), and while the music does continue to have a “stripped-down” sound, its galloping, hammering beats and raw, seething and searing chords channel blood-lusting frenzy. The guitar rakes like obsidian claws too, and becomes a demented, feverish, shrieking poltergeist as well. The music surges into wild chaos, a combination of maniac drumming, boiling fretwork, and rabidly sadistic vocals. Might make you imagine the ecstasy of demon lords raping and pillaging the damned souls given to them for an eternity of agony. END_OF_DOCUMENT_TOKEN_TO_BE_REPLACED