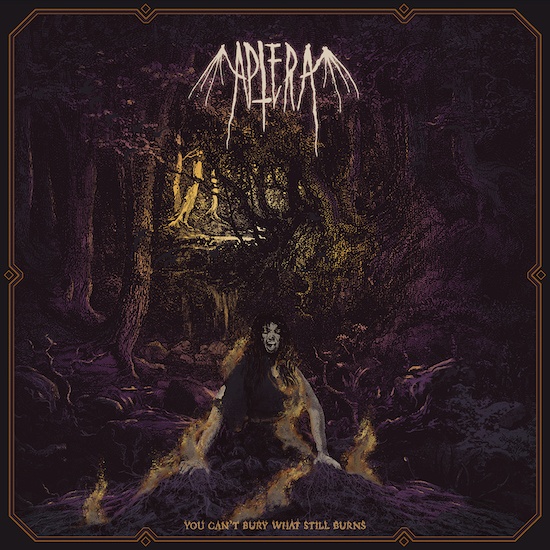 The lyrical themes of Aptera‘s debut album You Can’t Bury What Still Burns (which is set for imminent release by Ripple Music) leap across millennia, from legends of ancient Greek mythology to modern-day race-based murder at the hands of police and personal resistance against daily experiences of repression. What ties these time-spanning topics together is a through-line of anger and defiance, of rebellion and revenge, of refusal to be silenced and at times a call for violent resistance. It’s no wonder, then, that the album’s cover art, like its title, embodies a burning refusal to be buried and silenced.

This Berlin-based quartet’s interest in Greek mythology as a vehicle for some of their lyrical themes is also reflected in the name they chose for themselves, which was the site of a battle between the Sirens and the Muses, where the Sirens lost their wings and were cast into the sea. “Joining the sirens and muses at the table,” as the press materials recount in a further summation of the narratives, “are a coven of reanimated witch spirits and a gang of man-eating mermaids with a healthy appetite for destruction”.

We don’t know what came first, the lyrical themes or the music. But even if the band cooked up the riffs and rhythms before crafting the words, it seems obvious that the same spirit behind the lyrics fueled the music. The fires of rebellion unmistakably burn through both of them again and again, but the band’s music also doses the listener’s mind with hallucinatory vapors and ferries us into perilous supernatural realms. END_OF_DOCUMENT_TOKEN_TO_BE_REPLACED