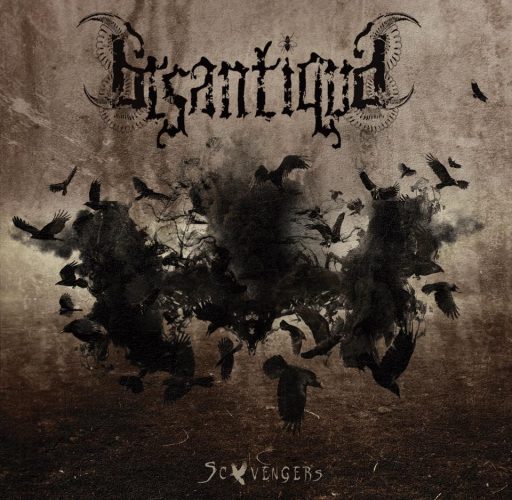 The Brooklyn-based black metal band Arsantiqva took their name from a conjunction of Latin words meaning “ancient art”, referring to European music from the late Middle Ages, perhaps in part because their key members are transplants from France and Russia. But there is nothing antiquated or time-worn about their music, as you’re about to discover through our premiere of a lyric video for “Hellwhore“, a track from the band’s forthcoming debut album, Scavengers.

Thematically, Scavengers explores a post-apocalyptic concept, “a metaphorical expression of a destroyed civilization taken to its primitive state of existence” — and “Hellwhore” is indeed a nasty, boisterous, and primally appealing romp through the wasteland. A big part of its appeal comes from the band’s success in pulling together a diverse array of stylistic elements, making them work in harness together, pulling in the same direction in the service of the song rather than scattering apart like a flock of startled ravens. END_OF_DOCUMENT_TOKEN_TO_BE_REPLACED